Trump has so few senior black advisers, Kellyanne Conway struggles to name one 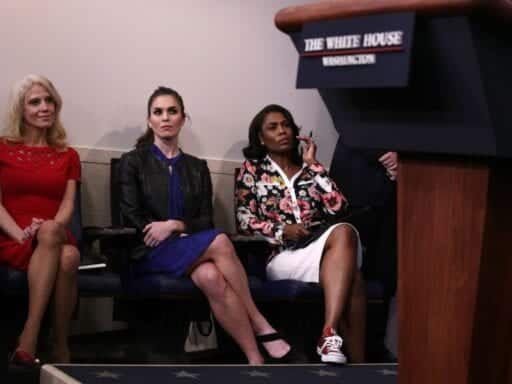 The woman who brought us “alternative facts” can’t name a top black adviser to the president.

Conway, senior counselor to the president, struggled to name anyone who met those criteria in an appearance on ABC’s This Week with Jonathan Karl. Omarosa Manigault-Newman, who has been in the press recently promoting her new book, was abruptly fired from the White House in December. Now that she’s gone, Karl asked, who is the most prominent, high-level adviser to the president on the West Wing staff who is black? Conway struggled to answer.

She first pointed to Housing and Urban Development Secretary Ben Carson, who Karl pointed out isn’t on White House staff. She then arrived at Ja’Ron Smith, special assistant to the president for domestic policy. Karl pointed out he was not in the West Wing, though he has an office in the Executive Office of the President, Conway said.

“What does that say to not have a single senior adviser in the West Wing who’s African American?” Karl asked.

“I didn’t say that there wasn’t, but hold on,” Conway said. “There are plenty of people…if you’re going by that and not by the actions of the president, which you probably should, then you should look at the fact that we have a number of different minorities, and the fact is that this president is doing well for all Americans.”

“Omarosa was the most prominent, high-level African-American serving in the West Wing on Pres. Trump’s staff. Who now is that person?” @jonkarl asks Kellyanne Conway.

Later in the program, former White House legislative affairs director Marc Short pointed to other White House staffers who are black, including Mary Elizabeth Taylor, who handles presidential nominations at the White House and was just announced to be an assistant secretary of state for legislative affairs. He also pointed to Smith, whose office he said is in the East Wing, and Daris Meeks, a former aide to Vice President Mike Pence who exited earlier this year.

Short conceded, however, that Manigault-Newman had a very top job. While at the White House, she earned a $179,700 annual salary, the maximum for an executive branch employee and on the same level as Conway, Steve Bannon, Don McGahn, Reince Priebus, and Sean Spicer.

And as Karl pointed out, none of the individuals Short named are among the 55 top-paid staffers in the White House. Smith, who both Conway and Short named, is listed by the White House as earning $115,000 annually.

Today’s Kellyanne Conway fiasco on TV today underscores a truth that Ja’Ron Smith’s friends have been trying to get him to leave the Trump administration for months.

That the Trump administration has a diversity problem isn’t shocking

President Trump has a history of racist remarks, and while he insists that he is, in fact, the “least racist” person there is (he isn’t), his administration is clearly lacking on the diversity front.

Trump’s Cabinet is the whitest, most male-dominated group since Reagan. There were seven women and 10 minorities in President Barack Obama’s first 22-member Cabinet; in Trump’s 24-member cabinet, there were four women and four minorities, according to Business Insider.

When Manigault-Newman left the White House, the Guardian’s Sabrina Siddiqui pointed out the White House had no black senior advisers in public-facing White House roles. The only high-ranking figures in the broader administration were Carson and US Surgeon General Jerome Adams.

And it’s not just the people Trump appoints — it’s also who he and the rest of the administration consult. A photo from the White House shared by Vice President Pence of an all-male, all-white group debating health care went viral and sparked outrage last year.

Appreciated joining @POTUS for meeting with the Freedom Caucus again today. This is it. #PassTheBill pic.twitter.com/XG6lQIy5a6

Trump, administration members, and lawmakers snapped a photo debating the administration’s zero-tolerance immigration policy and family separation in the summer. At the table were all men, all white. Trump’s daughter, Ivanka Trump, was apparently in the room but not at the table.

“We are keeping families together but we have to keep our borders strong. We will be overrun with crime and people that should not be in our country,” the Pres told meeting with members of Congress. Said he’ll sign order on families, before leaving for Minnesota this afternoon. pic.twitter.com/UztrFdqR9v

Even the White House interns are overwhelmingly white.

I missed the fall intern photo, but last summer and this spring, the White House had a combined 206 interns. Among them: 3 black men. 0 black women. Out of 206. Such a toxic organization. pic.twitter.com/NLxUzdopa8

If Trump would like to further the case that he is, as he says, the “least racist” person there is, it might behoove him to add some diversity into the ranks of his administration. Even Conway, the woman who brought us “alternative facts,” couldn’t maneuver her way out of this one.