Trump lawyers keep accusing Democrats of manipulating evidence. But they’re doing that themselves. 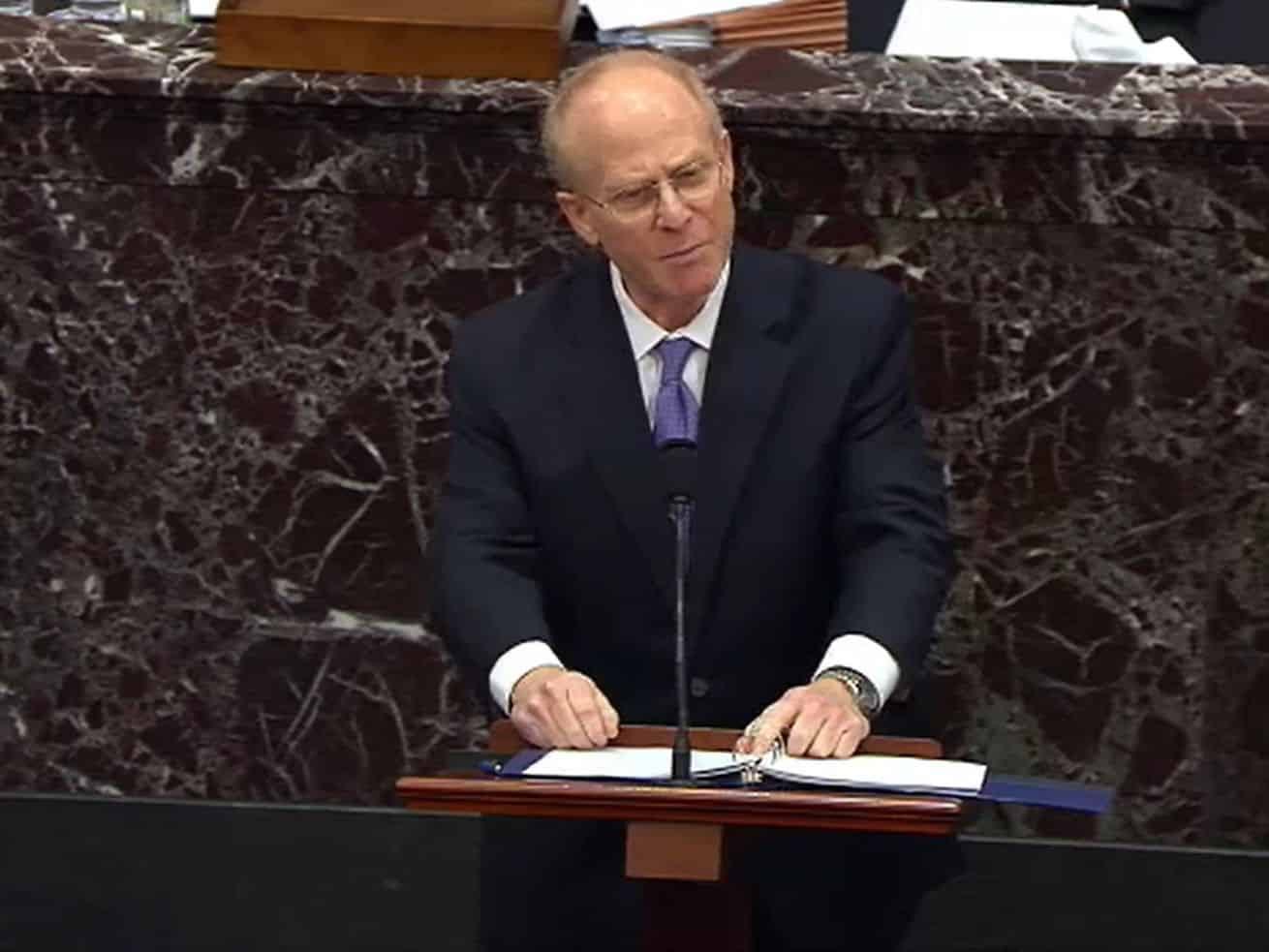 Trump’s defense team is twisting words out of their context.

Former President Donald Trump’s lawyers began their defense during Friday’s portion of the impeachment trial with flimsy allegations that House impeachment managers manipulated evidence. They then proceeded to present evidence far more egregiously manipulated than anything the managers presented.

One of the defense team’s key arguments was an exercise in whataboutism: They argued Democrats are being hypocritical in accusing Trump of inciting the January 6 insurrection, because they use the language of “fighting” all the time. To illustrate this point, they repeatedly played lengthy video montages of Democrats (and liberal celebrities) using language that is supposedly just as bad as Trump.

Here’s a portion of one of those videos:

Trump’s argument seems to be that Democrats have said “fight” a lot of times, therefore checkmate libs pic.twitter.com/BzM37Vh3Ob

One example Trump’s lawyers honed in on pertains to comments Michigan state Rep. Cynthia Johnson (D) made in early December saying, “This is just a warning to you Trumpers … be careful, walk lightly.” The implication is that Johnson’s comments are just as bad as Trump encouraging a mob of his supports to descend on the Capitol while Congress was certifying his Electoral College loss, therefore Democrats don’t have a leg to stand on when accusing Trump of inciting insurrection.

But an examination of the context of Johnson’s remarks reveals that her comments were not at all what Trump’s lawyers made them out to be. Johnson made her “be careful” comments in response to threats from Trump supporters she received after a hearing in which she pushed back on lies about election fraud that Trump lawyer Rudy Giuliani was pushed.

Media Matters’s Eric Kleefeld laid out the relevant context in an article from December:

Following that hearing, she became the target of almost 100 racist and threatening phone calls, with multiple callers saying that she would be lynched and one woman telling her, “You should be swinging from a f—— rope, you Democrat.”

Johnson responded with a video posted Tuesday on Facebook, announcing that a woman who threatened her had been tracked down by the FBI and state police: “So, this is just a warning to you Trumpers — be careful, walk lightly. We ain’t playing with you. Enough of the shenanigans. Enough is enough.”

So, instead of threatening Trump supporters, Johnson’s comments were actually aimed at getting them to stop threatening her. Ironically, in context they actually reveal one of the ways in which Trump’s rhetoric incited his followers in the weeks leading up to January 6.

The Johnson clip might be the most egregious example of Trump’s lawyers twisting Democrats’ words out of context, but it was far from the only one. Another part of the video montage focused on references to “fighting” that Sen. Elizabeth Warren (D-MA) made while running for president. But as Ali Vitali of NBC wrote on Twitter, Warren’s references to “fighting” were all about the political struggle for progressive policy, not encouraging an unruly mob to disrupt a congressional proceeding.

By comparison, I covered Trump for yrs & repeatedly heard him urge supporters to violence. In 2016, telling supporters he’d pay their legal bills if they punched protesters in the face or even wishing law enforcement were more forceful when removing protesters from events.

Beyond twisting words out of context, Trump’s team included clips of Democrats talking about “fighting” that couldn’t remotely be interpreted as incitement, such as Sen. Chuck Schumer (D-NY) talking about fighting the coronavirus.

I can’t believe Chuck Schumer incited violence against Covid like this pic.twitter.com/npT53XnKVz

Some of the clips of “fighting” rhetoric included in the video montage were more troubling. Johnny Depp’s 2017 “when was the last time an actor assassinated a president?” comment is indefensible and was included in Trump’s lawyers video — but that an actor made an irresponsible comment isn’t really a defense of Trump or an indictment of Democrats. And Rep. Maxine Waters encouraging people to “push back” on Trump administration officials arguably crossed a line, but even interpreted in the most incriminating way possible, two wrongs don’t make a right.

Ultimately, none of the comments included in Trump lawyers’ video montage is comparable to Trump radicalizing his followers with lies about the election being stolen from them, encouraging them to gather in DC, and then sending them to Congress. In that way, the “hypocrisy” defense rests on a false equivalence.

But as logically flawed as it was, the case made by Trump’s lawyers during the early part of Friday’s hearing seemed to be persuasive enough to at least one key undecided senator — Lisa Murkowski (R-AK) — who told reporters she found it to be “very organized” and “much stronger” than they incoherent, rambling case Trump’s lawyers made on Tuesday. Sens. Rob Johnson (R-WI) and John Barasso (R-WY) also indicated they found the Trump defense conviction.

Whataboutism may not make for strong arguments to those inclined to evaluate them on the merits, but it’s enough to provide a pretext for acquittal.

Google’s former CEO just committed another $1 billion to charity. But he’s spending it on buzzwords.
What celeb trainer Jillian Michaels got wrong about Lizzo and body positivity
The FBI is now investigating allegations against Kavanaugh. Here’s what comes next.
Live results for Oregon’s drug decriminalization ballot measure
Why Spider-Man’s future in the MCU isn’t as bleak as it seems
Watch: Ayanna Pressley learns she won her Massachusetts primary for Congress