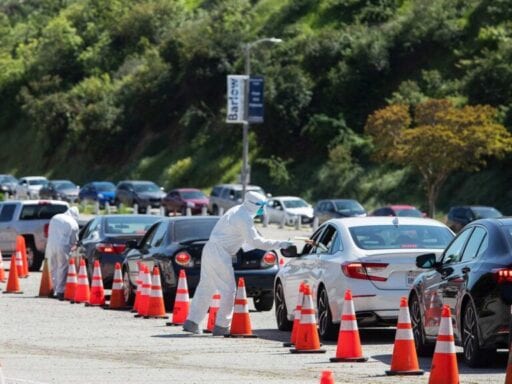 Between Walmart, CVS, and Walgreens, there are only 4 drive-through sites running.

Four national retailers touted at a White House press conference earlier this month as future coronavirus testing sites still have not rolled out their drive-through test centers, according to reporting from the Washington Post.

At a Rose Garden press conference on March 13, days after he declared Covid-19 to be a national emergency, President Donald Trump appeared with leaders from CVS, Target, Walgreens, and Walmart and said those chains would provide space in their parking lots for drive-through testing to take place.

The “goal is for individuals to drive up and be swabbed without having to leave your car,” Trump said at the time.

But according to the Washington Post, there are only four drive-through testing sites as of last week among the 26,400 stores those retailers operate: two at Walmart locations near Chicago, one each at a CVS in central Massachusetts and a Walgreens in the Chicago area, and none at Target. Rite-Aid, which was not represented at the press conference, has also opened one drive-through site in Philadelphia.

As Vox’s Alex Ward has reported, drive-through testing is one critical component of the fight against novel coronavirus, because it maintains isolation for potentially infected people and expedites the process of collecting data about who is infected. Experts have pointed to the large-scale rollout of free drive-through testing in South Korea as contributing to that country’s decline in coronavirus cases.

Some local governments, including New Rochelle, a suburban community north of New York City, have implemented such testing regimens themselves. At least 19 states have some mobile testing sites, most outside of hospitals.

But “an array of logistical challenges, ranging from a shortage of testing supplies to funding” has stymied the promised public-private partnership with some of America’s largest retailers, write the Post’s Elizabeth Dwoskin, Abha Bhattarai, Juliet Eilperin, and Ashley Parker.

They report that a nationwide lack of testing kits led the White House to downgrade its plans, limiting tests at the retail sites to first responders and health workers. Testing is only available for those who meet specific criteria, so although the US just reached the grim milestone of having the most confirmed coronavirus cases in the world, that number is almost certainly an undercount.

On March 13, Trump promised 500,000 testing kits would be available by the following week, and 5 million by April. To date, 672,449 tests have been administered nationwide, according to the Covid Tracking Project.

Mobile testing units around the country are primarily operated at health care sites, such as hospitals and clinics, because the FDA has only approved nostril swabs to be administered by professionals. However, Health and Human Services Assistant Secretary for Health Brett P. Giroir told the Post that the administration has supported the launch of about 30 mobile sites, and will support retail-driven testing sites going forward.

“We are working closely with these retailers now to explore the expansion of testing sites across the county, now further enabled by the nasal self-swabbing technique recently approved by the FDA,” said Giroir.

Trump says he wants to lift social distancing measures, but lack of testing undercounts US cases

The announcement that there would soon be widespread, easily accessible testing was greeted with optimism. As one pandemic expert, Dr. Dena Grayson, told Vox’s Alex Ward, “The key to containing a highly infectious, deadly virus is you have to identify who’s infected, track down all their contacts, and quarantine them. If you can’t even detect who’s infected, then you’re done.”

Grayson added that such measures would be especially effective in less-dense places, where early detection can halt the spread sooner.

At the time of the White House announcement, it was already clear that a lack of testing was contributing to an undercount of how many active Covid-19 cases were in the United States. And although testing has ramped up significantly in the last several weeks, with states and municipalities unrolling their own testing programs, these programs have been affected by an ongoing lack of tests and backlogs in authorized testing centers.

This lack of tests, and the resulting undercounted number of cases, contributed, in part, to delayed enforcement of social distancing measures. In the absence of widespread tests, people are encouraged to behave as though they already have the virus, staying inside to prevent the virus’s spread. Experts have said that for some people, the low reported numbers communicate less of a risk, reducing compliance rates.

But Trump has recently said he wants to relax social distancing requirements in the coming weeks in order to rejuvenate the economy. If measures encouraging people to stay at home are relaxed, and people begin interacting and gathering in groups again, it will be especially important to know who actually has the virus.

To be sure, drive-through testing won’t solve the need for every American to clearly understand their coronavirus status. Almost nine percent of American households don’t own cars, and younger people, city residents, and low-income people are all less likely to own cars and be served by these measures.

But at a moment when asymptomatic people can spread a powerful disease to vulnerable people, implementing innovative and widespread testing programs is an important tool in mitigating this virus’s spread.