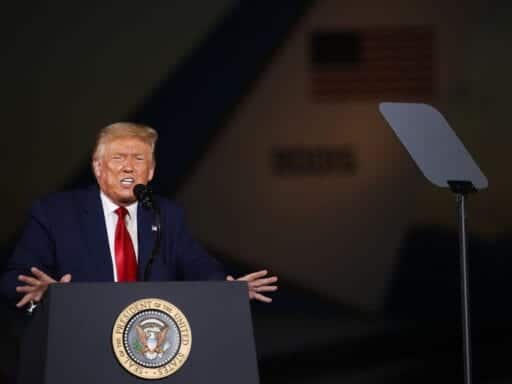 Trump is running as the “law and order” candidate, but it’s unclear whether that’s a winning message.

One person was killed in Portland, Oregon on Saturday after supporters of President Donald Trump lead a caravan into the city — and instead of trying to deescalate tensions, Trump spent Sunday on Twitter threatening to send in the National Guard.

Among a slew of other missives, the president retweeted a message calling for Portland Mayor Ted Wheeler to resign and tiptoed right up to the edge of endorsing violence, saying a video showing his supporters unleashing paintballs and pepper spray on Portland residents — and at least one journalist — reflected that escalating unrest “cannot be unexpected … The people of Portland won’t put up with no safety any longer.”

The big backlash going on in Portland cannot be unexpected after 95 days of watching and incompetent Mayor admit that he has no idea what he is doing. The people of Portland won’t put up with no safety any longer.The Mayor is a FOOL. Bring in the National Guard! https://t.co/bM6ypak94t

Notably absent from his tweets: Any kind of condemnation of violence on the part of his supporters, who he referred to as “GREAT PATRIOTS,” and any call for peace or deescalation.

The tweets — Trump’s initial response to news of the shooting ahead of a visit to his golf course in Virginia — reflect an extraordinary abdication of responsibility on the part of the president after the second spate of deadly violence at a protest in less than a week.

In a number of his tweets and retweets Sunday, Trump dismissed arguments that he is responsible for ending violence at protests, claiming instead that deadly incidents are the fault of Democratic mayors and governors. For example, the president amplified a tweet accusing Democrats of “being slow and hesitant to condemn violence and disorder” and also accused Wheeler and the Portland police of having “blood on their hands.”

“Disgraceful Anarchists,” he wrote in reply to a video of Portland protesters. “We are watching them closely, but stupidly protected by the Radical Left Dems!”

And it is a message that has been articulated by a number of Trump surrogates in recent days — blaming Democrats for violence and unrest was a recurring theme at the Republican National Convention last week, and again On Meet the Press Sunday morning, where White House Chief of Staff Mark Meadows claimed that while Trump “does govern and lead the entire country … it’s not Donald Trump that is saying, ‘Let’s look the other way.’ It’s the mayor of Portland.”

WATCH: @MarkMeadows says “Donald Trump’s America is peaceful” after deadly shootings in Kenosha and Portland. #MTP @chucktodd: “You’re saying these are all Democratic cities … does the president not believe he has responsibility of governing and leading the entire country?” pic.twitter.com/5WRA7AzV53

Meadows’s claim about Wheeler isn’t accurate. In a letter to Trump Friday, the Portland mayor condemned violence in no uncertain terms, writing that “there is no place for looting, arson, or vandalism in our city. There is no room here for racist violence or those who wish to bring their ideology of hate into our community.”

But that won’t matter for Trump’s purposes: With an election looming, Trump and his allies appear poised to make ongoing protests — and rising violence — a central focus of his reelection campaign.

Violence as a reelection strategy

Though shocking by any measure, Trump’s response Sunday isn’t that surprising. The president and his supporters have been forthright about their view on violence in the streets, with some, like senior adviser to the president Kellyanne Conway openly stating they believe the violence helps them politically — and that they’re not interested in calming things down.

Wisconsin Sen. Ron Johnson made as much clear on CNN’s State of the Union Sunday in an interview with Dana Bash. Johnson, a staunch Trump supporter, not only refused to condemn Trump’s “agitating” in Portland, but also refused to condemn the actions of Kyle Rittenhouse, the 17-year-old Trump supporter who shot and killed two protesters in Kenosha, Wisconsin, on Tuesday.

“I’m not for vigilantism,” Johnson said. “I’m not sure that’s what was happening … people took matters into their own hands.”

“I’m not for vigilantism. I’m not sure that’s what was happening … people took matters into their own hands” — Ron Johnson won’t condemn Kyle Rittenhouse, a Trump supporter who is charged with first-degree murder for killing two protesters in Kenosha pic.twitter.com/NE0oumPk5X

Even before Kenosha and Portland, the GOP and Trump have worked to advance a narrative that violence against protesters is, at worst, self-defense.

For example, the Republican National Convention last week featured — and valorized — Mark and Patricia McCloskey, a pair of St. Louis lawyers who are both facing felony charges after they menaced Black Lives Matter protesters passing in front of their house with guns.

Just because Trump and his team believe that chaos and violence in the streets of major US cities is good for them, however, doesn’t mean it’s true. In fact, polling suggests that it could be just the opposite.

Ahead of the recent rash of protests — as well as the shooting of Jacob Blake by a police officer in Kenosha, Wisconsin that set them off — a Yahoo!/YouGov poll found that 48 percent of Americans view Trump as “the source of the chaos,” and only 21 percent of Americans believe he can, or will, protect them from the chaos.

Why has Trump struggled to take advantage of those issues?

48% view Trump as the source of the chaos vs. 21% believe he will protect them from the chaos pic.twitter.com/q7NOdgOZCB

Even among Republicans, Trump’s numbers don’t look great — just 51 percent believe Trump can protect them from the chaos.

It’s important to note that this poll was taken from August 21 to 23, before protests, and violence, escalated. But a more recent poll, taken from August 28 to 29 by ABC News/Ipsos, found 59 percent of Americans disapproved of the Republican message at the GOP’s convention, which, again, focused heavily on America being in chaos due to Democratic mismanagement — and that 62 percent saw Blake’s shooting as part of a broader problem in how Black Americans are treated by law enforcement.

The concerns suggested by this polling underscore an important reality: All of the unrest happening in the US right now, which Trump has gleefully painted in apocalyptic terms as the country’s future should Democratic nominee Joe Biden win in November, is happening on Trump’s watch, not Biden’s. And although Portland and other cities experiencing violence and unrest are indeed led by Democrats, it’s hard to see what a Trump reelection could do to suddenly bring calm to the country given they would likely remain under Democratic leadership during a second Trump term.

But with the economy in the midst of recession, the coronavirus running rampant, and Trump some 8.8 percentage points behind Biden in FiveThirtyEight’s national polling average, Trump remains in need of a broadly persuasive reelection pitch with less than 70 days until the election. If his tweets Sunday are any guide, Trump has recently found a message he likes — whether or not it works — and he’s sticking with it.