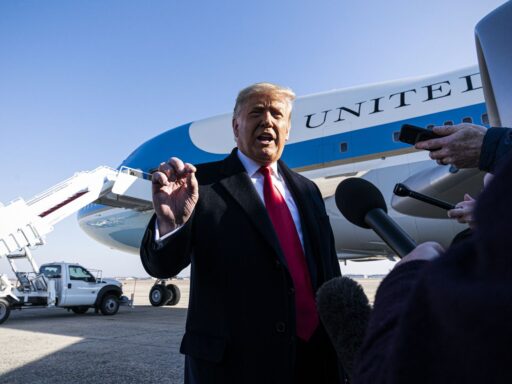 He took no responsibility for the death and destruction while blaming Democrats for “causing tremendous danger.”

In his first live public comments since he encouraged a crowd of his supporters to march on Capitol Hill last Wednesday, President Donald Trump took no responsibility for whipping them up. He showed no sympathy for the five people who were killed. He turned up the heat on a situation instead of lowering the temperature. And he tried to rewrite history.

“If you read my speech — and many people have done it, and I’ve seen it both in the papers and in the media, on television — it’s been analyzed, and people thought that what I said was totally appropriate,” Trump told reporters at Joint Base Andrews Tuesday, on his way to Texas for a media event at the southern border.

In reality, Trump’s speech was widely viewed — including by many Republicans who previously supported him — as leading to the violence at the Capitol. An article of impeachment introduced by House Democrats on Monday accuses Trump of “inciting violence against the Government of the United States.”

As I detailed last Friday, Trump used the words “fight” or “fighting” at least 20 times during that speech last week, saying things like, “We’re going to have to fight much harder,” and, “You’ll never take back our country with weakness.”

“You don’t concede when there’s theft involved,” Trump said during the speech, alluding to the lies he and other Republicans used as a rationale to try to overturn his decisive Electoral College and popular vote loss to Joe Biden. “Our country has had enough. We will not take it anymore and that’s what this is all about.”

As soon as Trump finished, attendees were inspired. They marched down Pennsylvania Avenue to the Capitol, chanting threats against Vice President Mike Pence, who Trump mentioned repeatedly by name. The protest turned into a mob. Some rioters entered and vandalized the building. Others appeared to have much worse intentions. Five people died while the Capitol was overrun.

But to hear Trump tell it on Tuesday, he encouraged none of it. Trump told reporters that his remarks were “totally appropriate.”

Then he pivoted to whataboutism. He suggested Democratic politicians who condemned police over the summer violence are more guilty of fomenting unrest.

“If you look at what other people have said — politicians at a high level — about the riots during the summer, the horrible riots in Portland and Seattle and various other places, that was a real problem, what they said,” said Trump. “But they’ve analyzed my speech and my words and my final paragraph, my final sentence, and everybody to the T thought it was totally appropriate.”

Q: “What is your role in what happened at the Capitol? What is your personal responsibility?”

President Trump: “If you read my speech…people thought that what I said was totally appropriate.” pic.twitter.com/90Pdt8xFSz

Trump’s new remarks are worrisome. According to an FBI bulletin, armed protests like the one that took place at the Capitol are “being planned at all 50 state capitols from 16 January through at least 20 January, and at the US Capitol from 17 January through 20 January.” The document also warns of an “uprising” if Trump is removed from office.

Trump, however, suggested on Tuesday that if there is more violence in his name in the days to come, it’ll actually be the fault of House Speaker Nancy Pelosi and Senate Democratic leader Chuck Schumer.

Trump has a long history of talking out of both sides of his mouth. In this case, he defends and encourages violence while at the same time blandly denouncing it.

His comments also highlight how Trump’s final eight days in office present a real risk. Even without Twitter, Trump can use the megaphone of the presidency to communicate with the radicalized part of his base that showed up at the US Capitol last week. And the message he sent to them on Tuesday is that they did nothing wrong, and there’s someone else to blame if they decide to do it again (but please refrain from violence).

The rise in meth and cocaine overdoses, explained
Democrats are banking on a pro-coal, pro-teachers strike candidate to deliver for them in Trump coun...
Exclusive: Trump promised Kim Jong Un he’d sign an agreement to end the Korean War
How one little Electoral College vote in Nebraska could be pivotal for Joe Biden
Why Trump and McConnell are trying — and failing — to push through Fed pick Judy Shelton
“Deaths of despair”: The deadly epidemic that predated coronavirus