Trump said the opioid epidemic would go away. It didn’t. 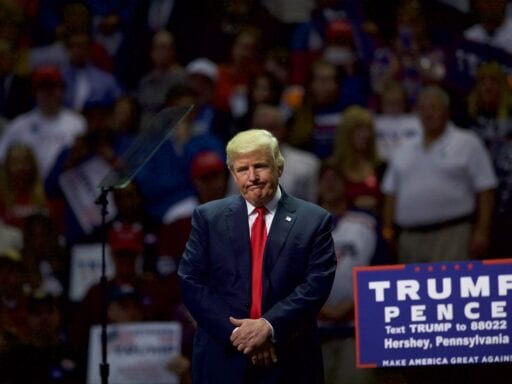 If Biden wins, he’ll have to be ready to do something about the opioid crisis.

Several months after his inauguration, President Donald Trump said the opioid epidemic would end under his watch. “Watch what happens, if we do our jobs, how the number of drug users and the addicted will start to tumble downward over a period of years,” he said in 2017. “It will be a beautiful thing to see.”

It’s similar to the kind of empty promise Trump made on Covid-19 — when he said it would disappear “like a miracle.” And just like the coronavirus, the opposite has happened: Under Trump, drug overdose deaths actually increased, even before the Covid-19 pandemic took off.

According to preliminary data from the Centers for Disease Control and Prevention, drug overdose deaths in 2019, before Covid-19, hit a record high of nearly 72,000, up almost 5 percent from 69,000 in 2018 and 11 percent from 65,000 in 2016, the year before Trump took office. The data for 2020 so far suggests the year will be even worse, due to problems caused by Covid-19 and the continued spread of fentanyl, a dangerous synthetic opioid, in illegal drug markets.

While overdose deaths dipped in 2018, that seemed to be only a temporary reprieve — and experts say Trump and the federal government more broadly haven’t done enough to stop the crisis. Referring to the 2018 drop in overdose deaths, Stanford drug policy expert Keith Humphreys previously told me, “I’m not sure that’s because of anything we did.”

So overdose deaths increased again in 2019 and are set to increase further in 2020.

If former Vice President Joe Biden defeats Trump in November, experts and advocates argue that it will be on him to right the government’s response. Once the coronavirus is finally gone, another public health crisis will remain in the opioid epidemic — killing tens of thousands of Americans a year.

The same structural problems that led to the opioid crisis and allowed it to fester remain. America still doesn’t support addiction treatment anywhere near enough. The treatment facilities that do exist often don’t follow the evidence on what works and are often frauds. Harm reduction services, like needle exchanges, remain underused. And there’s still too much opioid prescribing. For years, experts have called for a big investment — including health care reform and tens of billions of dollars — to fix these problems, but nothing from the federal government, including under Trump, has approached the scale warranted.

Despite rarely mentioning it on the campaign trail, Biden has a good plan to do something about drug addiction and overdoses, making a serious investment into treatment and harm reduction and cracking down on excess opioid prescriptions.

It’s also the kind of plan that could potentially pass with bipartisan support, with Republican leaders from states hit hard by drugs like Sens. Rob Portman (OH) and Shelley Moore Capito (WV) deeply interested in doing something about the issue.

But getting ready to do something means acknowledging one thing: What Trump and the federal government have been doing for the past several years hasn’t been working. The US needs to change its approach.

Trump’s approach to the opioid crisis has failed

Based on the preliminary federal data, drug overdose deaths spiked in 2019 to nearly 72,000. That was slightly higher than the previous record high for a single year in 2017 — meaning, if the early data is right, all the gains from 2018’s decline were erased and then some.

At the same time, there are several signs that things will be even worse in 2020. Fentanyl, which has increasingly supplanted heroin in illegal drug markets, appears to be spreading to the western US — a huge point of concern because fentanyl, as a more potent opioid than heroin, is more likely to cause overdoses. Overdoses involving stimulants, like cocaine and meth, are also going up.

This, experts say, is partly a result of federal inaction. It’s not that Trump and Congress have done literally nothing, but what they’ve done has been far too little: The single-digit billions they’ve put toward the issue fall short of the tens of billions experts say is needed, and their regulatory tweaks to improve access to treatment amount to too little, too late. The addiction treatment system remains not just underfunded but underregulated, allowing fraud and abuse to take root in many facilities and a failure to follow any evidence-based practices in others.

Leana Wen, a health policy expert at George Washington University, summarized much of the expert consensus when she described the federal moves so far as “tinkering around the edges.”

On these fronts, Trump hasn’t suggested going much bigger — and has at times proposed significant cuts to agencies involved in fighting the opioid epidemic.

So the crisis continues and, in most years, keeps getting worse, contributing to an overall decline in life expectancy since 2014.

The other actions Trump has proposed wouldn’t do much about the issue, either. He’s said his wall at the US-Mexico border would help keep drugs out, but the evidence suggests it wouldn’t. He’s called for tougher prison sentences and the death penalty for high-level drug dealers, but that’s discredited by a body of research finding that tougher criminal penalties don’t slow the flow of drugs into the US.

In fact, Trump has put out multiple proposals that would make the overdose crisis worse. For one, he’s repeatedly called for repealing the Affordable Care Act (“Obamacare”) and advocated for cutting Medicaid. The ACA alone expanded access to health care, including addiction treatment, to hundreds of thousands of people with addictions. A recent study in JAMA Network Open linked Obamacare’s Medicaid expansion to a 6 percent reduction in opioid overdose deaths.

Trump did declare a national emergency over the opioid crisis. But that led to almost nothing, as the Government Accountability Office concluded in a report. (The emergency declaration lapsed for nine days in January, as Dan Diamond reported for Politico, and no one even seemed to notice.)

These failures were in some ways a prelude to the Covid-19 pandemic. The opioid crisis is an issue Trump should have taken seriously — it’s important to the country, but particularly to his base of white voters without a college education, whom the crisis has hit especially hard. Yet Trump simply hasn’t taken the issue seriously or made it a top priority throughout his administration. As with Covid-19, the political incentives are there, but the president’s magical thinking and refusal to do the tough work of policymaking and governing have left a void of federal inaction on a serious public health issue.

And, unfortunately, there’s very little sign that will change if Trump wins a second term.

Biden has a plan. He should push for it.

Given Trump’s failures, the biggest chance that something will change in the coming years may be Biden winning the election.

Biden does have a plan to fight the opioid crisis. It would dedicate $125 billion over 10 years — the largest commitment of any 2020 campaign — to scaling up addiction treatment and other prevention and recovery programs, paid for with higher taxes on pharmaceutical companies’ profits. It would take steps to stop the overprescription of opioid painkillers while encouraging better care for chronic pain, and it would try to slow the flow of illicit drugs from China and Mexico. It would also move to “reform the criminal justice system so that no one is incarcerated for drug use alone.”

It’s the kind of comprehensive approach and large investment that experts have demanded for years, even before Trump.

But now it could actually happen. While Democrats have spent a lot of the campaign talking about sweeping health care reform, a Green New Deal, and massive economic investments, these are proposals that are, frankly, not very likely to become law even if Biden wins the White House, especially if Republicans keep control of the Senate.

The opioid crisis is different. Several Republican senators, including Portman and Capito, have shown interest in getting work done on the crisis. It’s telling that one of the few major pieces of legislation Trump has done was related to the opioid epidemic, even if experts agree it was too little, too late.

The issue could become even more relevant in the next few years. As Covid-19 (hopefully) fades, the overdose crisis will, unfortunately, stick around — and, based on the data, may even get worse as fentanyl spreads and stimulants make a comeback. With better leadership, that could push the federal government to more action.

There are good reasons to be skeptical about whether Biden could get the full $125 billion he’s proposing to fight the opioid crisis. One thing I’ve heard consistently from sources in Congress is that Republicans in particular are skeptical of spending too much money on addressing the overdose crisis. That will continue into a Democratic administration, likely even more so as Republicans become resistant to giving a Democratic president a victory.

But at this point, any kind of sizable investment would be a step in the right direction. As Biden and Democrats prepare for the possibility of taking the White House and Senate, it’s an issue that should be at the top of their minds — a chance to succeed where Trump failed.