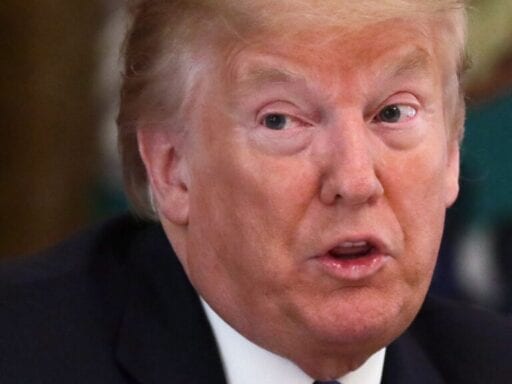 Share
Loading...
President Donald Trump speaks during a meeting with his Cabinet in the East Room of the White House on May 19, 2020. | Alex Wong/Getty Images

President Trump sent two tweets Wednesday morning threatening financial retaliation against states that are trying to make it easier to cast a ballot during the coronavirus pandemic, saying he will “hold up” funds for two swing states encouraging people to vote absentee:

Breaking: Michigan sends absentee ballots to 7.7 million people ahead of Primaries and the General Election. This was done illegally and without authorization by a rogue Secretary of State. I will ask to hold up funding to Michigan if they want to go down this Voter Fraud path!..

State of Nevada “thinks” that they can send out illegal vote by mail ballots, creating a great Voter Fraud scenario for the State and the U.S. They can’t! If they do, “I think” I can hold up funds to the State. Sorry, but you must not cheat in elections. @RussVought45 @USTreasury

Trump is not telling the truth about Michigan’s plans. Michigan Secretary of State Jocelyn Benson plans to mail an absentee ballot application to voters, not an actual ballot. Several Republican-led states plan to do the same thing. (Nevada, by contrast, will provide actual ballots to voters.)

Yet while several states are taking steps to make it easier to vote absentee, the two states that Trump singled out are likely to be contested in the 2020 election. Trump barely won Michigan in 2016, and he lost Nevada by less than 3 points.

It’s also unclear which “funds” Trump is threatening to withhold from Michigan and Nevada, but he could be referring to “Election Security Grants” provided for in the Coronavirus Aid, Relief, and Economic Security (CARES) Act, which he signed into law in March.

The CARES Act appropriated $400 million in funds to help states “prevent, prepare for, and respond to coronavirus, domestically or internationally, for the 2020 Federal election cycle.” Michigan received $11.2 million as its share of those funds, and plans to use some of that money to mail an absentee ballot application to every voter in the state. Nevada received $4.5 million and will use that money to transition to a system where registered voters automatically receive a ballot in the mail.

Both states, in other words, appear to be using the federal funds for the exact purpose laid out by Congress. By making it easier for voters to cast a ballot by mail, the states will “prevent” the spread of coronavirus at polling sites. They will “prepare for” an election where coronavirus might otherwise discourage many voters from casting a ballot. And they will “respond” to the unique challenges a pandemic imposes on voters and election officials.

Nevertheless, Trump is threatening to cut funding to these states — which appear to be using the CARES Act funds for the specific purpose laid out by Congress in that act. Although Trump recently cast a mailed-in ballot in Florida’s primary election, he’s also criticized mail-in voting because “Democrats are clamoring for it” and, he claims, when states make it easy to vote by mail, it “doesn’t work out well for Republicans.”

Cutting off funding to Michigan or Nevada is unconstitutional

Congress may offer conditional grants to state governments — appropriating money that states may elect to take, but with restrictions on states that take it. In South Dakota v. Dole (1987), however, the Supreme Court ruled that there are constitutional limits on Congress’s power to impose such conditions on funding for states.

Among other things, Dole provides that “if Congress desires to condition the States’ receipt of federal funds, it ‘must do so unambiguously … enabl[ing] the States to exercise their choice knowingly, cognizant of the consequences of their participation.’” In other words, the federal government may not impose new conditions on the funding after a state has already agreed to take it. Any conditions imposed on federal grants must be clearly stated before the state decides whether to take the money.

The CARES Act does impose some conditions on states that accept Election Security Grants. States accepting such grants, for example, must “provide to the Election Assistance Commission … a report that includes a full accounting of the State’s uses of the payment and an explanation of how such uses allowed the State to prevent, prepare for, and respond to coronavirus.” States also must return any money that is “unobligated on December 31, 2020.”

Notably, none of these conditions limit the state’s ability to spend the money to expand access to mailed-in ballots.

Voter fraud is a fake problem

Despite Trump’s claims that enhanced access to mailed-in ballots will increase voter fraud, such fraud barely exists. The state of Oregon, for example, has provided more than 100 million mail-in ballots to voters since 2000 but has only documented about 12 cases of fraud.

Similarly, according to the Brennan Center for Justice’s Wendy Weiser and Harold Ekeh, “an exhaustive investigative journalism analysis of all known voter fraud cases identified only 491 cases of absentee ballot fraud from 2000 to 2012” — and billions of votes were cast during that period.

Thus, Weiser and Ekeh write, “it is still more likely for an American to be struck by lightning than to commit mail voting fraud.”

These negligible examples of voter fraud, moreover, need to be weighed against the potential impact of a pandemic. If voters are either unable to leave their homes to cast a vote or unwilling to do so due to fears of becoming infected, hundreds of thousands or even millions of voters could be disenfranchised if they are unable to vote by mail.

So even if Trump’s warnings of voter fraud are offered in good faith — and not merely as an excuse to reject voting rights policies that, in his own words, do not “work out well for Republicans” — the president is proposing that we disenfranchise thousands or even millions of voters in order to prevent a small handful of fraudulent ballots from potentially being cast in 2020.

All of this said, there is a possibility that Michigan’s plans to mail an absentee ballot application to every voter could be struck down by the state’s Republican-controlled supreme court.

After Michigan Secretary of State Jocelyn Benson, a Democrat, announced her plan to mail ballot applications widely, her actions were sharply criticized by her predecessor, Republican Ruth Johnson. Trump’s attack on Benson’s plans suggests that the GOP will swiftly unite against those plans.

In 2008, moreover, a state appeals court ruled against a county election clerk who wanted to mail absentee ballot applications to every voter over the age of 60. So that decision could potentially form the basis for a challenge to Benson’s plans — although that decision was also handed down several years before the state amended its absentee ballot law to make it much easier for voters to obtain such a ballot.

Even if state litigation does prevent voters from receiving absentee ballot applications in the mail, however, that will have nothing to do with the CARES Act or any other federal limits on how states conduct their elections. Michigan’s Republican Supreme Court, for better or for worse, has the final word on questions of Michigan state law.

But federal law is quite clear: Trump cannot cut off federal assistance to Michigan and Nevada.

Buying books isn’t enough to keep community bookstores alive
The pop cultural obsession with Princess Diana’s innocence, explained
17-year-old charged with murder in Kenosha, Wisconsin, shootings
Saturday Night Live stayed home last weekend. The show was more exciting than it’s been in years.
Your guide to getting into Schitt’s Creek, this year’s Emmys comedy darling
What day is it today?