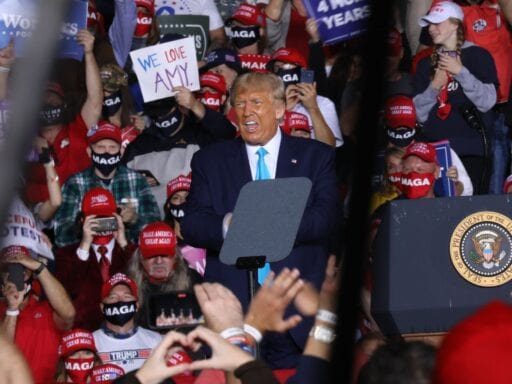 Trump is layering lie upon lie to rewrite the history of his encouragement of Russian hackers.

Trump accused reporters this weekend of mischaracterizing comments he made in July 2016 publicly encouraging Russian hackers to attack Hillary Clinton. But the way he described those comments is completely at odds with reality, and there’s video to prove it.

“Do you remember when I said, ‘Russia, if you’re listening, find her emails,’ or whatever the hell I said? ‘Find her emails,’ and then we all laughed together, 25,000 people in a stadium,” Trump said at a rally in Middletown, Pennsylvania, on Saturday. “They cut it off exactly before we all started to laugh together, right? And for two years they’ve been saying, ‘He dealt with Russia. He asked Russia to please get her emails,’ or whatever the hell we were asking … the whole place cracks up with me … this is how dishonest these people are.”

This is no doubt part of his never-ending effort to discredit the media.

Trump lies and says his infamous July 2016 call for Russia to hack Hillary Clinton happened in front of “25,000 people in a stadium,” when in fact it happened at a news conference. pic.twitter.com/P1GsqVLUSY

Trump made the remarks in question during his first campaign, saying, “Russia, if you’re listening — I hope you are able to find the 30,000 emails that are missing. I think you will probably be rewarded mightily by our press. Let’s see if that happens.”

But Trump did not say this to a cheering and laughing crowd at one of his rallies. He actually said it in front of a handful of reporters during a news conference at his Doral property in Florida. That news conference wound up being his final one before the election, in large part because of the negative stir his remarks generated.

Furthermore, nobody laughed when Trump said it, and his comments are just as bad in context as they are when the “Russia, if you’re listening” line is considered on its own. Here’s the footage:

Jim Acosta of CNN, the reporter who asked the question that prompted Trump to say “Russia, if you’re listening” at the July 2016 news conference, tweeted on Tuesday morning that “the reporters at the news conference didn’t laugh. And Trump didn’t appear to be joking.”

The president seems to be trying to turn reality on its head, even though there’s tape to prove otherwise.

Retconning the incident has become a staple of Trump’s campaign speeches. On September 19 in Fayetteville, North Carolina, for instance, Trump brought it up and claimed “everybody laughed” and “it was a joke,” then added the lie about it happening at a rally for the first time over the weekend.

Even if Trump didn’t mean for his comments to be taken seriously, Russian hackers apparently did. According to Robert Mueller’s indictment of 12 Russian military intelligence officials, on the same day Trump made those comments, Russian hackers “attempted after hours to spearphish for the first time email accounts at a domain hosted by a third-party provided and used by Clinton’s personal office. At or around the same time, they also targeted seventy-six email addresses at the domain for the Clinton Campaign.”

Trump has made clear in the years since that he doesn’t think foreign interference in American elections is a bad thing, insofar as it helps him. In October 2019, Trump flatly told reporters that he thought the Chinese and Ukrainian governments “should investigate the Bidens.” Those comments were widely condemned but were defended as just a joke by Republican members of Congress like Kevin McCarthy and Roy Blunt, even though footage of the comment showed Trump was serious.

REPORTER: What exactly did you hope the Ukrainian president would do about the Bidens?

TRUMP: “I would think that if they were honest about it, they’d start a major investigation … they should investigate the Bidens … China likewise should start an investigation.” pic.twitter.com/gLVBjmSs3q

Trump’s comments about the July 2016 news conference were especially shameless, but they were far from the only brazen lie he pushed in Middletown. He told his supporters that just prior to the coronavirus hitting the US, “we were coming together … I was getting calls from stone-cold, hard-line Democrats,” even though in reality he had just been through an impeachment trial. He claimed 35,000 people attended his Friday evening rally in Newport News, Virginia, but local reports indicate there were around 4,000. And he appeared to fabricate stats about excess mortality in order to mislead people about how hard hit the US has been by Covid-19.

Trump once advised his supporters in 2018 to “just remember — what you’re seeing and what you’re reading is not what’s happening.” He’s not subtle about it.