Trump says the Electoral College is advantageous to Democrats. But he is president because of it. 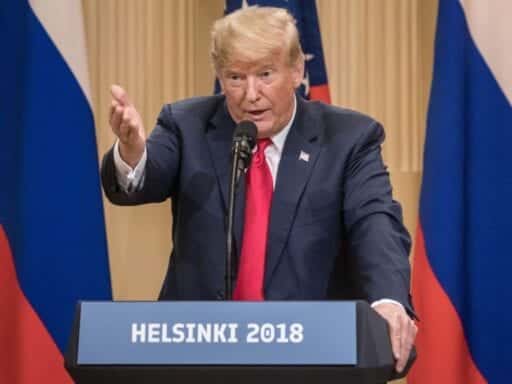 Why Trump said the Electoral College is better for Democrats.

Standing next to Russian President Vladimir Putin, President Donald Trump, arguing he ran a “clean campaign” to victory, appeared to be confused about how he actually won the presidential election in 2016: because of the Electoral College.

“The Democrats lost an election, which, frankly, they should have been able to win, because the Electoral College is much more advantageous for Democrats, as you know, than it is to Republicans,” Trump said in the press conference with Putin.

“The Republican candidate must nearly run the table on the battleground states in order to squeak into the White House, whereas the Democratic candidate has multiple pathways to victory,” Matt Mayer, a conservative writer explained in the Washington Examiner. Here’s how he breaks down the math:

But as Vox’s Andrew Prokop explained, who has the advantage in the Electoral College is not so clear-cut. There are several reasons that the system isn’t fair — to both Democrats and Republicans.

Millions of votes in safe states end up being “wasted,” at least in terms of the presidential race, because it makes no difference whether Clinton wins California by 4 million votes, 400,000 votes, or 40 votes — in any scenario, she gets its 55 electors. Meanwhile, states like Florida and Ohio get the power to tip the outcome just because they happen to be closely divided politically.

That’s how Trump got elected: He lost the popular vote dramatically but was able to win the election because he clinched narrow wins in Wisconsin, Michigan, and Pennsylvania.

In fact, the case for keeping the Electoral College often comes from those in small states and in rural, typically more Republican, regions who don’t want small towns and rural voices to get drowned out by people who live in cities.

Either way, if you ask Trump, he falsely says he won both the popular vote and the Electoral College.

Prisons have already failed to contain Covid-19. What happens when the new variants arrive?
Why Yeezys, a brand based on exclusivity, are suddenly so easy to buy
Trump’s hold of Ukraine aid was illegal, according to the US government’s top watchdog
Republican House member once lamented you can’t call women “sluts” anymore
A Wall Street Journal op-ed about Jill Biden pairs virulent sexism with academic elitism
Why Alaska’s Senate and House races look competitive in 2020