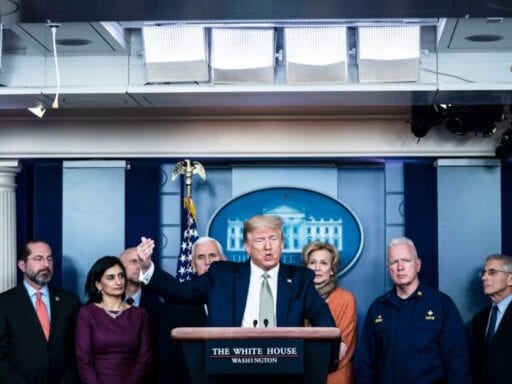 And more things to know today.

West Virginia registered its first case of the coronavirus Tuesday, meaning that the virus has now spread to all 50 US states. This comes as President Donald Trump and his administration is instituting tighter border controls with US neighbors, specifically Canada for now.

Trump abruptly announced on Twitter Wednesday morning that the US and Canada would both begin restricting border crossings, with more restrictions to follow. Trade, for now, will still be allowed across the border. Europe, too, has now barred nonessential travel to the bloc as it reels from the coronavirus.

Here are the biggest developments in coronavirus news you need to know today:

West Virginia confirmed its first case of coronavirus on Tuesday, ending its run as the last remaining state without a reported diagnosis. It’s a grim marker, even if the pandemic was almost assured to spread to all 50 states eventually.

Meanwhile, the Trump administration has urged Americans to avoid gatherings of 10 or more people, work from home when possible, and stay home if they’re sick or vulnerable. Schools, restaurants, bars, gyms, and more are shut across the country. And more measures might be on the way.

On Wednesday morning, Trump announced on Twitter that, by “mutual consent,” the border between the United States and Canada will be closed to “non-essential traffic.” Trade, however, will not be affected, according to the president.

Trump promised that additional details will be coming soon, likely at the White House coronavirus task force’s daily press briefing, to be held today at 11:30 am Eastern.

We will be, by mutual consent, temporarily closing our Northern Border with Canada to non-essential traffic. Trade will not be affected. Details to follow!

The president’s announcement tracks with reports that Canadian Prime Minister Justin Trudeau and Trump were working on some kind of agreement like this. On Monday, Canada implemented strict entry requirements, preventing most foreigners from traveling to any of its provinces for the time being. Those rules initially exempted US citizens. Now, it seems, they’ll be expanded to include most Americans, though the specifics remain unclear.

More and more countries across the world are erecting blocks to foreigners. But with community spread — meaning transmission among people in a specific area who didn’t have contact with an infected person, or travel to the source of infection — already happening, including in the US, travel bans can only do so much to stop the spread of Covid-19.

The Trump administration has also reportedly considered shutting down the US-Mexico border, which could potentially allow border patrol agents to immediately deport people back to Mexico without processing their cases at all, according to NBC News. The White House hasn’t officially announced any such policy yet — unlike Trump’s tease about Canada — but the New York Times reports a decision could be made in 48 hours.

The European Union is the latest to implement strict entry requirements, barring all visitors from outside the bloc for 30 days. This will encompass 26 European Union states and four other countries (Norway, Switzerland, Iceland, and Liechtenstein) that abide by the EU’s freedom of movement rules. This will not affect movement among these EU countries.

Ireland has not joined, because it must maintain an open border with the United Kingdom, which is no longer in the bloc and would have to agree to join the other EU members. It’s an unforeseen, but not exactly surprising, Brexit complication.

The ban applies to all non-EU nationals, though there are exceptions for family members of EU citizens, diplomats, and people who work in health care or deliver goods and may need to cross borders.

There are a few reasons Europe is taking this dramatic step even though the crisis point for the coronavirus has already arrived on the content. Europe is now the epicenter of the coronavirus pandemic. Italy currently has the most coronavirus cases outside of China, with more than 31,000 as of March 18. Cases in Spain and Germany have also surpassed 10,000.

But it’s also a way to bring all of the EU states under the same umbrella policy. The pandemic is threatening a fundamental pillar of the EU: its commitment to freedom of movement. As the outbreak has spread, some EU countries have instituted temporary border controls both to stop the virus from coming into its territory and to prevent the spread outward. Each country is implementing its own policies to protect its citizens and try to mitigate transmission, and those differences are straining the EU as an institution.

One good news item: the power of music

All around the world, music is getting people through the coronavirus — like those flash mobs and performances from windows in Italy, for example.

Well, here are two kids in Columbus, Ohio, who made all those cello lessons worth it. Their 78-year-old neighbor is staying home in self-isolation because of the coronavirus, so they sat on her porch and gave her a private cello concert. It’s a reminder that we’re all in this together.

The math behind why we need social distancing, starting right now
When is the next 2020 debate? The vice presidential debate is on October 7.
Senate Republicans are finally acknowledging that Joe Biden won the election
Silicon Valley is spending way more on the 2020 election than it did on 2016
What are hot chocolate bombs and why are they suddenly everywhere?
Welcome to the May issue of Vox’s The Highlight