Trump seems to think there’d be no coronavirus if there was no testing. It doesn’t work like that. 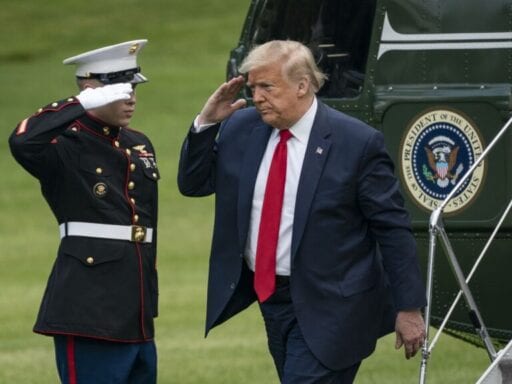 Trump says “if we didn’t do any testing, we would have very few cases.” Nope.

Nearly four months since the first coronavirus case in the US was reported, President Donald Trump continues to struggle to come to grips with how testing for the virus works and why it’s important.

During remarks on Thursday at the Owens & Minor distribution center in Allentown, Pennsylvania, Trump tried to downplay the severity of the US’s coronavirus outbreak by arguing the country wouldn’t be leading the world in cases if it weren’t for the fact that so much testing is being done here — as if coronavirus cases simply wouldn’t exist if we didn’t test to find them.

“Don’t forget, we have more cases than anybody in the world. But why? Because we do more testing,” Trump said. “When you test, you have a case. When you test, you find something is wrong with people. If we didn’t do any testing, we would have very few cases. They [the media] don’t want to write that.”

Of course, it stands to reason that conducting more tests correlates with finding more cases — but that’s a good thing. More testing helps public health experts and policymakers understand the full scope of the problem, isolate those who have tested positive, and then trace their contacts to help contain potential outbreaks. But for Trump, the downside is it undercuts his argument that it’s already safe for states to lift stay-at-home orders that are hurting the economy, and therefore his reelection hopes.

Not doing any testing for coronavirus might make it easier for Trump to argue he’s doing a great job handling the current public health crisis, but it’d result in the Covid-19 disease spreading in an even more out-of-control and deadly manner.

Trump, of all people, should understand this. Just last week, Katie Miller, press secretary for Vice President Mike Pence, tested positive for the coronavirus. Miller, whose positive test came on the heels of Trump’s personal valet testing positive, said she was asymptomatic, meaning that if she hadn’t been able to get tested — as is still the case for many people throughout the country — she might have continued going to work and possibly spread the virus to Pence, Trump, or others working in the White House.

But if you thought that chain of events would serve as a wake-up call to Trump about the importance of businesses, schools, and other institutions having similar testing capacity to the White House, you’d be mistaken. Trump responded to the news of Miller’s positive test by claiming it served as evidence of “why the whole concept of tests aren’t necessarily great” because “she tested very good for a long period of time, and then all of the sudden she tested positive.”

That, of course, is how communicable diseases work — you don’t have them until you do. The point of testing is allowing people to know when they have a disease so they can take the necessary measures to not spread it. That’s especially important for viruses like the coronavirus that can be spread by asymptomatic carriers.

Trump, however, has made it clear from the early days of the coronavirus outbreak that he’s not above juking the numbers. Recall his comments from early March about how he was reluctant to let American passengers off a coronavirus-infected cruise ship because the resulting increase in US coronavirus cases would look bad for him.

During his remarks on Pennsylvania on Thursday, Trump went as far as to describe coronavirus testing as “overrated.” But experts broadly agree that for businesses and schools to reopen in some semblance of a safe manner, US testing capacity must be ramped up.

Whether the president is aware of it or not, progress is being made on that front.

Despite what Trump would have you believe, the US is not leading the world in testing. According to data compiled by Worldometer, on a per-million-people basis, the US ranks 39th.

That’s not the say that testing capacity in the US isn’t improving. As my colleague German Lopez detailed on Thursday, the roughly 300,000 tests per day being conducted in the country now is roughly double the number from early April. The numbers are still significantly short of the 500,000 tests per day that experts believe is the minimum necessary to fully control the outbreak, but progress is being made.

It’s not the case, however, that the ramp-up in testing has caused the US to have more than five times more coronavirus cases (more than 1.4 million confirmed cases as of May 15) than the second-worst country (Russia, with nearly 263,000).

People in the US aren’t just getting tested for fun — they’re actually getting sick and dying. This is reflected not only in the fact that the US has endured more than double the number of deaths as the second-hardest-hit country (more than 85,000, followed by the UK with more than 34,000), but also that the US is 13th in the world when it comes to deaths per million people. The high case number here correlates with high death numbers, not just high testing numbers.

Ironically, one of the reasons the coronavirus outbreak has been so bad here is because the US fell way short on testing in February and March, allowing the coronavirus to spread across the country in a largely undetected way. So when Trump compares the US’s raw testing numbers favorably with countries like South Korea, as he did in Pennsylvania, he leaves out the crucial context that South Korea was able to get the coronavirus under control early in a way the US wasn’t, because it had more testing capacity during a critical period.

Trump, of course, isn’t big on nuance of that sort — especially when it reflects unfavorably on him. He wants the economy to rebound as soon as possible, and to that end he wants schools and businesses to reopen ASAP. And if that means making a nonsensical case against the idea of object permanence, so be it.

Trump went to Louisiana to stump for local Republicans. He ended up attacking national Democrats ins...
Israel’s election, and how Benjamin Netanyahu might lose, explained
A Capital Gazette shooting survivor doesn’t want your thoughts and prayers
Trump’s bizarre Rose Garden news conference shows why he’s impossible to negotiate with
The Conners killed off Roseanne via opioid overdose. The real Roseanne Barr is not happy.
Minneapolis police officer Derek Chauvin charged with murder in the death of George Floyd