Trump thinks immigration is his party’s winning issue in midterms. The polls aren’t so sure. 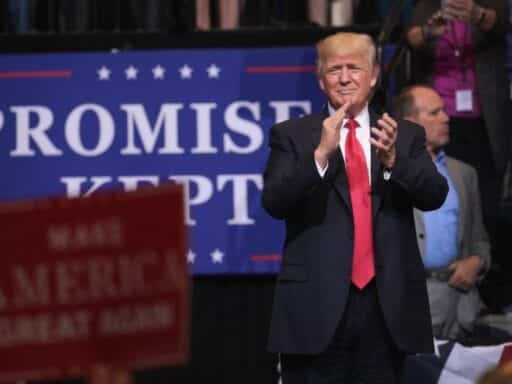 Trump’s signature policy platform is a total wild card in the 2018 midterms.

Trump and conservative Republicans are running hard on immigration, but warring polls show it’s not at all clear how voters really see Trump’s immigration crackdown.

In the last few weeks conflicting points have emerged in a number of polls:

As Bloomberg’s Sahil Kapur has pointed out, it’s still not clear how sentiment on immigration, which has long been a white whale for lawmakers in Washington, will play out in November:

Long a divisive issue in the U.S., the roiling debate on immigration has vaulted it to the top of voters’ concerns before the November vote, and neither party appears to have a clear advantage.

Meanwhile, the Democratic Party has moved substantially to the left on immigration policy; its latest rallying cry to “Abolish ICE,” the Immigration and Customs Enforcement agency that has purview over immigration laws in the country’s interior, is a testament to that shift. Recently Democratic socialist Alexandria Ocasia-Cortez, who ran on a “Abolish ICE” message, triumphed over established New York Democrat Rep. Joe Crowley in a House primary.

Just months away from a midterm election that both Republican and Democratic lawmakers are billing as a referendum on Trumpism, voters’ response to the president’s immigration agenda remains an open question.

Trump and his circle are betting on the immigration message

Time and time again, Trump has brought immigration policy front and center, often calling on Congress to act. Republican congressional leaders haven’t been so sure about how to proceed — so much so, that when Trump first came into office, Republican leaders’ policy agenda left off comprehensive immigration policy reform altogether. The centerpiece of the Republican Party’s message as the 2018 midterms approach is supposed to be the new tax law, which the GOP championed.

Yet as the House and Senate’s failed immigration bills have shown, immigration is a divisive issue for Republicans — the type of issue that a political party typically tries to avoid in a contentious election year.

But Republican leaders, such as House Speaker Paul Ryan and Senate Majority Leader Mitch McConnell, have been forced to respond to Trump’s immigration priorities.

After all, when President Donald Trump won the presidential election in 2016, his campaign managers attributed it in part to his making immigration a hot-button issue in the campaign — from his calls for a southern border wall to his “Muslim ban.” Now, Trump’s using the immigration issue to campaign once again.

A vote for Democrats in November is a vote to let MS-13 run wild in our communities, to let drugs pour into our cities, and to take jobs and benefits away from hardworking Americans. Democrats want anarchy, amnesty and chaos – Republicans want LAW, ORDER and JUSTICE!

And Trump’s most ardent defenders in Congress are betting on conservative anti-immigration policy as a winning message in 2018, too.

“If the House votes for amnesty, then it will deflate the base, and they’ll feel betrayed, and they’ll stay home,” said Rep. Steve King (R-IA), one of the most ardent anti-immigrant conservatives in Congress. (His comments echoed a position former Trump aide Steve Bannon holds.) “And that we could lose the majority over that, and if that happens, then it’s almost a certainty that Democrats would impeach President Trump,” King added.

When Ryan took up immigration bills in the House, Rep. Mark Meadows (R-NC), the chair of the ultraconservative House Freedom Caucus and one of Trump’s confidants, also warned that Republicans’ immigration platform could make or break their party during the Trump administration.

Polling shows immigration is an energizing issue for Republicans. But the most vulnerable Republicans, many in districts with large immigrant populations, are pushing back against this kind of messaging.

Democrats are moving to the left on immigration

Meanwhile, rising Democratic stars are calling to “abolish ICE” — using it as a rally cry for liberals appalled by Trump’s immigration policy. Candidates across the country are running on the slogan — and emerging 2020 presidential hopefuls are embracing it, too, including Sens. Elizabeth Warren and Kirsten Gillibrand.

The position is a response to the photos and reports of thousands of children who have been separated from their parents because of Trump’s “zero tolerance” policy toward asylum seekers crossing the border illegally. As Vox’s Dara Lind explained, “Abolish ICE” is the latest leftward shift for Democrats:

For Democrats, it’s been a simple calculus. Democrats’ attempts at “tough love” centrism didn’t win them any credit across the aisle, while an increasingly empowered immigrant-rights movement started taking them to task for the adverse consequences of enforcement policies. Democrats have now learned to ignore the critics on the right they couldn’t please, and embrace the critics on the left whom they could.

But for now, it’s unclear if this more aggressive pitch will be the main vehicle to propel a “so-called” blue wave, which Democrats are seeking in November.

Immigration may be the leading issue for voters overall at the moment, but health care and the economy continue to be the top two priorities for Democratic voters.

Who is Tom Steyer without his red plaid tie?
3 days, 5 transcripts: What we’ve learned from recently released impeachment depositions
Wonder Woman 1984 has been postponed until August 14
Can you still do IVF during the coronavirus pandemic?
“This one is scarier”: Obama-era officials say current economic crisis is fundamentally different fr...
Iowa’s 2016 caucus app worked and everyone forgot about it