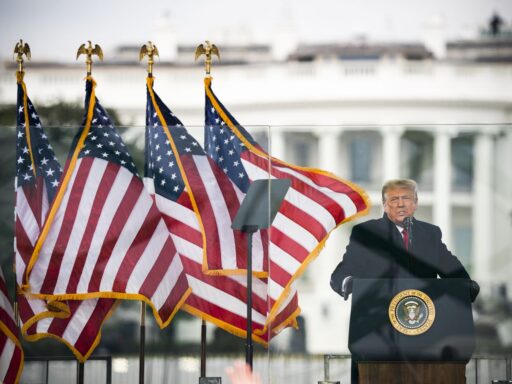 Speaking to protesters from the White House, Trump said “we have to primary the hell out of the ones that don’t fight.”

The “Save America” pro-Trump rally just outside the White House on Wednesday amounted to a declaration of war on the Republican Party by the president’s most fervent followers.

President Donald Trump attacked a long list of Republicans during his speech, including Mitch McConnell, Mitt Romney, Liz Cheney, and Bill Barr, in addition to the Supreme Court. Their offenses? Being unwilling to help him try to overturn his election loss to Joe Biden.

“They’re weak Republicans, they’re pathetic Republicans,” Trump said, adding later: “If they don’t fight, we have to primary the hell out of the ones that don’t fight. … We’re gonna let you know who they are.”

Trump teased in Georgia on Monday that he’d present new smoking gun evidence of election fraud during Wednesday’s rally, but it ended up just being the same old lies. He referred to the counting of votes as “explosions of bullshit” and compared the US unfavorably with “third-world countries.”

“Mike Pence, I hope you’re gonna stand up for the good of our Constitution and for the good of our country. And if you’re not, I’m going to be very disappointed in you, I will tell you right now. I’m not hearing good stories.” — Trump pic.twitter.com/RyZZpxGrqZ

Trump’s speech started so late and went on for so long, however, that Pence couldn’t have heard most of Trump’s pressure campaign if he wanted to. The joint session of Congress to make Biden’s victory official started well before Trump finished speaking. Fox News viewers saw the surreal visual of Trump putting pressure on Pence to reject election results while Pence oversaw the hearing.

Quite the split screen — Trump putting massive pressure on Pence to try to overthrow the election while Pence gets ready for the joint session pic.twitter.com/8oFG5IgwGw

Alas, while Trump was speaking, Pence released a statement indicating he would not reject the Electoral College results after all.

Trump’s speech capped off a morning in which Trumpworld figures like Rudy Giuliani, Kimberly Guilfoyle, Eric Trump, and Donald Trump Jr. spoke. The attempted hostile takeover of the Republican Party was also a major theme during Don Jr.’s speech.

“These guys better fight for Trump,” he said. “Because if they’re not — guess what? I’m gonna be in your backyard in a couple of months.”

“These guys better fight for Trump. Because if they’re not –Guess what? I’m gonna be in your backyard in a couple of months” — Donald Trump Jr pic.twitter.com/drSqNNTEQz

But regardless of whether Trumpworld wants to accept it, the reality is the president doesn’t have enough votes in the House or Senate to overturn the will of the voters. Nonetheless, at the end of his speech, Trump encouraged his supporters to “walk down Pennsylvania Avenue” and try “to give our Republicans — the weak ones, because the strong ones don’t need any of our help — we’re to try and get them kind of pride and boldness they need to take back our country.”

Trump suggested he would walk with his supporters but reportedly returned to the White House after his speech. Meanwhile, Fox’s Chris Wallace urged viewers to “understand how utterly unprecedented” Trump’s remarks were.

Chris Wallace of Fox News: “What we’re seeing today, people need to understand how utterly unprecedented it is. For the last hour, we’ve heard the sitting POTUS refuse to concede & say that he will never accept the results of an election… the POTUS is making up stories.” pic.twitter.com/8VTg7PZG4j

“For the last hour, we’ve heard the sitting president refuse to concede and say that he will never accept the results of an election,” Wallace said. “What’s at stake at whether a bunch of Congress can overturn the will of the American people, 150 of them, when they went out to vote.”

Whoa: Trump supporters going at it with the police on the steps of the Capitol as Congress counts the Electoral College ballots inside pic.twitter.com/LiQhaa5KkQ

But inside, Senate Majority Leader Mitch McConnell delivered a speech in which he strongly criticized Trump’s effort to overthrow the election, saying, “If this election were overturned by mere allegations from the losing side, our democracy would enter a death spiral.”

Taxpayer costs at Trump properties show the shamelessness of his “corruption” talk
The Justice Department has dropped Michael Flynn’s case
The real story behind TikTok
What the US can learn from other countries using phones to track Covid-19
This week in TikTok: The absurdity of the Capitol siege
Rejoice! The long-rumored Deadwood movie is officially happening.