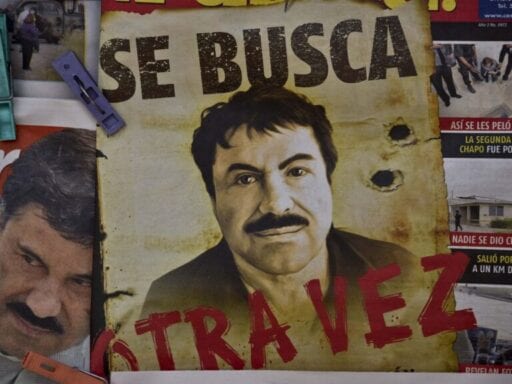 Share
Loading...
A poster with the face of Mexican drug lord Joaquin “El Chapo” Guzman, reading “Wanted, Again”, is displayed at a newsstand in one Mexico City’s major bus terminals on July 13, 2015, a day after the government informed of the escape of the drug kingpin from a maximum-security prison.  | YURI CORTEZ/AFP via Getty Images

It would undermine US-Mexican efforts to combat them.

President Donald Trump wants to designate Mexican drug cartels as “terrorist organizations,” a move that would give the US more tools to fight the groups, including the possibility of sending troops to Mexico.

But it could also undermine cooperation with Mexican forces in combating the cartels and escalate tensions between the two governments.

Trump proposed categorizing cartels as terrorist organizations — the same designation as al-Qaeda, ISIS, and Boko Haram — in the wake of violence that has escalated in recent weeks. Just earlier this month, 21 police and cartel members died in a shootout near Mexico’s border with Texas.

The US government has already designated some cartels as “transnational criminal organizations.” Reclassifying them as terrorist organizations would give the US additional authority to issue sanctions against those who support the groups, prevent their members from entering the US and deport those who have already reached American soil. It would also pave the way for the US to send active-duty troops to Mexico to engage in counterterrorism operations.

Trump said last week that the administration has made all the necessary preparations to issue the classification, but has held off for now at the request of the Mexican president, Andres Manuel López Obrador:

….will temporarily hold off this designation and step up our joint efforts to deal decisively with these vicious and ever-growing organizations!

It’s not the first time Trump has pressured the Mexican government. In June, he threatened to impose tariffs on all Mexican goods unless Mexico stepped up its efforts to prevent migrants from reaching the US southern border. López Obrador, who had assumed office with the aim of treating migration as a humanitarian rather than enforcement issue, consequently deployed over 20,000 national guard troops to intercept migrants.

A series of high-profile killings have brought the cartels back into Trump’s focus.

In November, cartel members attacked a Mormon family traveling in northern Mexico, murdering six children and three mothers. The assailants opened fire on the family’s car and burned it. Though it appeared to be a random act of violence, Mexican authorities later suggested that the assailants might have mistaken the family’s car for one carrying members of another criminal group that was seeking control over the region.

Trump then called for using military force against the cartels.

“This is the time for Mexico, with the help of the United States, to wage WAR on the drug cartels and wipe them off the face of the earth,” Trump tweeted following the attack.

Earlier this month, another 21 people died during a standoff between Mexican police and cartel members who had attacked local government offices in the town of Villa Union, which is near the Texas border. Four police officers, 10 cartel gunman and seven other cartel members were killed.

Mexican authorities also suffered an embarrassment in October after they let Ovidio Guzmán López walk free following an hours-long shootout in the city of Culiacán. The son of Joaquín “El Chapo” Guzmán — the former leader of the Sinaloa Cartel who is now serving a lifetime prison sentence in the US — had been indicted in the US on charges of trafficking cocaine, marijuana, and meth in February.

But Mexican police nevertheless released him shortly after taking him into custody because they were attacked by other cartel members.

These incidents have put pressure on López Obrador to clamp down on the cartels. The Mexican president had been elected on a platform of combatting the cartels, running with the slogan “abrazos, no balazos,” which translates to “hugs, not gunshots,” and pushing violence prevention. He also assigned the newly minted Mexican National Guard to combat the cartels, until he was forced to redirect them to immigration enforcement at Trump’s request.

But that strategy doesn’t appear to be working in the face of brazen acts of violence, including the macabre practice of hanging of bodies from bridges. The Jalisco New Generation Cartel, which formed in 2010, is expanding to new parts of the country that were previously peaceful and is now in direct competition for territory with heavyweights like the Sinaloa cartel. For example, the cities of Guanajuato, Tijuana, and Los Cabos has seen an uptick in violence.

The homicide rate in Mexico is also on the rise: There were 22,059 murders this year as of October, as compared to 21,581 by the same time last year.

Why the US shouldn’t call the cartels “terrorist organizations”

There is a precedent for designating violent groups as terrorist organizations in Latin America. In 2002, the Bush administration named Colombia’s largest rebel group, the communist Revolutionary Armed Forces (FARC), as a terrorist group. The US sent the military to advise the Colombian government on its counterinsurgency and counterterrorism operations.

But the situation in Mexico is very different: If the US designates the drug cartels as terrorist organizations and sends troops to Mexico, the Mexican government would perceive it as an impingement on national sovereignty, and bilateral efforts to combat the cartels would likely stall.

“The prospect of bringing active-duty US troops onto Mexican soil would not go over well with Mexican voters,” Paul Angelo, a fellow for Latin America studies at the Council of Foreign Relations, said.

Instead, it might make sense to expand the number of cartels that are labeled transnational criminal organizations. With that classification, the US can still bring financial sanctions against these organizations, just as it could against terrorist organizations.

The number of organized crime organizations in Mexico has shot up in recent years, jumping from roughly 20 in 2006 to over 400 in 2018, Angelo said. Only a fraction of those 400 groups, however, are currently designated as transnational criminal organizations.

The US could also accept more responsibility for helping to fuel cartel violence in Mexico. The drug cartels exist because of American demand for illegal drugs, and most of the cartels’ firearms are being illegally exported from the US.

CBP could set up a screening initiative to confiscate arms that are bound for Mexico — but that would require a significant expansion of the agency’s customs staff on the border at a time when the Trump administration is more interested in investing in its immigration enforcement operations.

“If we really accept that we have a shared responsibility — we have a partnership in helping Mexico with all its criminality — then we also have to take responsibility for all the firearms that are flowing out from the United States to Mexico and helping fuel this violence,” Angelo said.