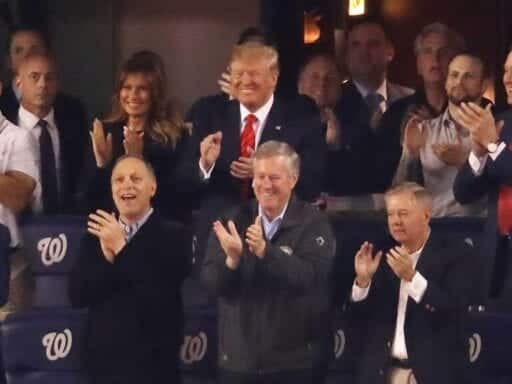 The president probably thought his World Series experience would be a bit better.

President Donald Trump got a less-than-welcoming — but not necessarily unexpected — reception at game five of the World Series on Sunday. And instead of leading “lock her up” chants, he was on the receiving end of “lock him up” calls from the crowd.

Here’s what happened: The president attended the fifth game of the World Series between the Houston Astros and Washington Nationals in Washington, DC on Sunday evening. With him in his box at the game were First Lady Melania Trump and multiple Republican members of Congress, including Sens. Mitch McConnell (R-KY) and Lindsey Graham (R-SC) and Reps. Mark Meadows (R-NC), Matt Gaetz (R-FL), and Liz Cheney (R-WY).

During the game, the Jumbotron showed US service members in a tribute to them, and the crowd cheered. But when Trump and his guests were shown on the big screen, those cheers quickly turned to boos. And then, some fans began to chant, “Lock him up.”

Video and audio of the event quickly spread across Twitter.

WATCH: President Trump met with loud boos as he is introduced at the World Series in Nationals Park on Sunday night. pic.twitter.com/4RTW8ZqxqP

It’s far from the first time a baseball crowd has booed an American president, but the incident got so much attention that Twitter put it out as a “Twitter Moment” on Sunday night.

“Lock him up!” chants broke out at Nationals Park as President Trump attended Game 5 of the World Series on Sunday night. https://t.co/H6jCLDB91r

When Trump was first introduced by the stadium’s announcer, he turned to the first lady and appeared to mouth, “Wow.” As the booing began, the pair tried to smile and clap through it, though the smiles later turned to grimaces.

Beyond the booing and chants, some fans at Nationals Park also brought with them signs calling for Trump’s impeachment. Signs reading “Impeach Trump” and “Veterans for Impeachment” were on display at the field.

The “Veterans for Impeachment” sign behind home plate pic.twitter.com/5THxQoCn39

It’s not necessarily surprising that the president would be met with some negativity on Sunday evening: Washington, DC, is a political and left-leaning place. In 2016, over 90 percent of the district voted for Trump’s rival Hillary Clinton. Earlier in the day, Trump had taken a victory lap on the death of ISIS leader Abu Bakr al-Baghdadi and perhaps expected a better reception on that. But he didn’t get it.

Talk about the booing and chants Trump got on Sunday, predictably, spilled over into Monday and set off a new debate: Should people be comfortable with so publicly chastising the president?

On Monday, Morning Joe hosts Joe Scarborough and Mika Brzezinski lamented the chants. “We are Americans, and we do not do that. We do not want the world hearing us chant, ‘Lock him up’ to this president or to any president,” Scarborough said.

For almost 2 years, Joe and Mika helped NORMALIZE the creep who regularly hurls insults at them, and who leads “Lock Her Up” chants at his hate rallies.

Now they don’t think he deserves the SAME treatment.

Democratic Sen. Chris Coons (D-DE) in an interview with CNN said he has “a hard time with the idea of a crowd on a globally televised sporting event chanting ‘lock him up’” at the president. “I frankly think the office of the president deserves respect, even when the actions of our president at times don’t,” he said, adding that he hopes those chants won’t start to become commonplace at Democratic rallies or the Democratic National Convention next year.

Others, however, said the handwringing over the booing and chants was misplaced.

Sorry Joe, but it felt great, because we have the right to criticize the President. And he earned every bit of it! https://t.co/ty1GFbjl6s

Many people pointed out that Trump has generally shown no qualms about the “lock her up” and “lock them up” chants that go on at his rallies.

A President who *leads* a “lock her up” chant against his political enemies smacks of authoritarianism.

Americans who chant “lock him up” to a President who acts like a tyrant and believes he is above the law is calling for accountability. https://t.co/pJVEdNYX0J

It’s worth noting that a president being booed at a public event, including a baseball game, isn’t a new occurrence. It happened to former Presidents Barack Obama, George W. Bush, and George H.W. Bush. In other words, this is not unique to Trump.

And other presidents have been booed at baseball games, in case everyone suddenly forgot.