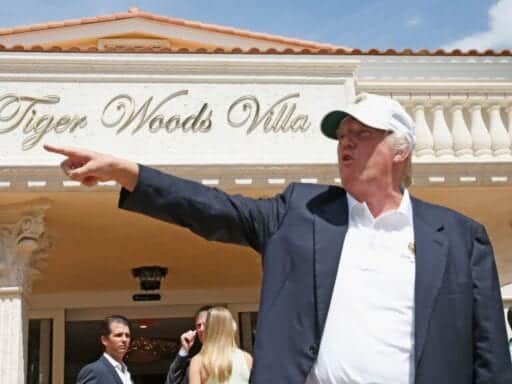 Critics accused Trump of wanting to use the meeting to personally enrich himself.

President Donald Trump has retreated from a plan to host next year’s G7 summit at his Miami resort amid criticism that it was a brazen attempt to use his position to benefit his private businesses.

Critics — including Democrats and Republicans — widely panned the choice, announced Thursday, as one of the starkest examples of self-dealing in a presidency that has taken the practice to unprecedented levels. Saturday, Trump said it was this “Irrational Hostility” that pushed him to change his mind, despite being convinced that in proposing to host the G7 at his resort he “was doing something very good for our Country.”

I thought I was doing something very good for our Country by using Trump National Doral, in Miami, for hosting the G-7 Leaders. It is big, grand, on hundreds of acres, next to MIAMI INTERNATIONAL AIRPORT, has tremendous ballrooms & meeting rooms, and each delegation would have…

…..its own 50 to 70 unit building. Would set up better than other alternatives. I announced that I would be willing to do it at NO PROFIT or, if legally permissible, at ZERO COST to the USA. But, as usual, the Hostile Media & their Democrat Partners went CRAZY!

….Therefore, based on both Media & Democrat Crazed and Irrational Hostility, we will no longer consider Trump National Doral, Miami, as the Host Site for the G-7 in 2020. We will begin the search for another site, including the possibility of Camp David, immediately. Thank you!

The administration will consider using Camp David — the site of the last US G8 in 2012 — instead of Trump’s private resort, the president said.

Citizens for Responsibility and Ethics in Washington (CREW) Executive Director Noah Bookbinder said in a statement Saturday that Trump’s decision to plan the G7 at his own property was “outrageous, corrupt and a constitutional violation.”

“It was stunningly corrupt even for a stunningly corrupt administration,” Bookbinder said. “His reversal of that decision is a bow to reality, but does not change how astonishing it was that a president ever thought this was appropriate, or that it was something he could get away with.”

Thursday, acting White House chief of staff Mick Mulvaney announced the choice of Trump National Doral in Miami as the site of the annual summit, which gathers the leaders of seven of the most economically powerful countries on earth. Mulvaney defended the decision by saying the resort was “far and away the best physical facility for this meeting.”

The acting chief of staff didn’t deny that the choice to host the leaders at his resort would present a major marketing opportunity for the resort, which has struggled financially, but simply argued that Trump “doesn’t profit from being here” and “doesn’t need any more help” with branding.

“Donald Trump’s brand is probably strong enough as it is, he doesn’t need any more help on that,” Mulvaney said. “It is most recognizable name in the English language and probably around the world.”

As Vox’s Aaron Rupar noted, the fact that Trump’s name is widely recognized doesn’t change the fact that bringing several world leaders to his resort couldn’t hurt his struggling business:

That Trump’s name is one of the most well-known in the English language might arguably be true — but “Trump National Doral Miami” is less so. And beyond the branding opportunity, it’s also a financial one, especially seeing as how Doral’s net operating income has declined by nearly 70 percent since 2015.

And Sunday, Mulvaney suggested the president still thinks of his businesses when making decisions, telling Fox News Sunday, “At the end of the day he still considers himself to be in the hospitality business … we’re all surprised at the level of pushback.”

Critics are concerned about patronage of Trump’s businesses, but the president is not

While the Miami Doral announcement brought widespread backlash, it wasn’t necessarily a surprise. Accusations that Trump has been improperly benefitting from his presidency have been nearly constant since he entered office.

Trump is the first president in decades to refuse to divest from his business empire. He’s argued the fact that he has placed his financial holdings in a trust that he can access whenever he chooses protects him from conflicts of interest, but his critics argue his continuing to benefit from his hotels and resorts opens the door to corruption.

They also claim that Trump may be in violation of the US Constitution’s “emoluments” clause, which bars public officials from accepting gifts from foreign parties given foreign officials have spent money at Trump properties.

Members of the Trump administration have done little to quiet these critics, and Mulvaney suggested Thursday that critics’ concerns do not faze the president; the acting chief of staff said, “He got over [the appearance of impropriety] a long time ago.” Meanwhile, Trump and has refused to discourage actions that personally enrich his family.

Trump has or is developing resorts in at least 10 countries and has met with their leaders since taking office, Politico reported. In China, Saudi Arabia, and South Korea, companies owned by the governments themselves are helping to develop Trump properties. And he reportedly spoke with the president of Argentina about a permitting difficulty his business is having in that country.

Foreign officials have also patronized the president’s properties, particularly the Trump hotel in Washington, DC. The Embassy of Kuwait has held celebrations at the DC hotel, as has the Embassy of the Philippines. The Filipino ambassador to the US told Balitang America the choice wasn’t made at random: “Having it in a hotel that happens to have his name is not necessarily the end-all be-all, it’s a statement. It’s a statement that we have a good relationship with this president,” he said.

In his phone call with Trump that helped launch the impeachment inquiry into the president, Ukrainian President Volodymyr Zelensky made it a point to tell Trump he had stayed at a Trump property in New York. And Malaysian Prime Minister Najib Razak and the Prime Minister of Romania have both been seen at Trump properties as well. Japanese Prime Minister Abe Shinzo accepted a stay at Trump’s Mar-a-lago property as a “gift.” The list goes on.

Beyond foreign contributions, Trump has been censured for federal spending at his properties. Vice President Mike Pence faced criticism because he chose to stay at a Trump hotel in Doonbeg, Ireland — 180 miles from his meetings in Dublin — during an official visit. The week before that stay, reports surfaced that Attorney General William Barr plans to spend $30,000 on a Christmas party at Trump’s Washington, DC property, where he’s been spotted dining. And in recent months, there has been concern the military was encouraged to spend money at a Trump resort in Scotland.

All of this had led to scrutiny from lawmakers and ethics watchdogs. Last week, Sen. Bob Menendez of New Jersey, ranking Democrat on the Senate Foreign Relations Committee, estimated members of 22 different foreign governments have spent money at Trump resorts. Ethics experts at CREW put that number at 111 officials from 65 foreign governments. CREW has also tallied 630 visits to Trump properties from hundreds of administration officials and tracked $5.9 million in spending from political groups at the resorts.

House Democrats are investigating Trump’s apparent self-dealing; the chamber’s Oversight and Judiciary committees sent letters to the administration last month demanding details about his plan to host the G7 summit at his resort and Pence’s visit to the Ireland resort. But the Trump administration has maintained the president has done, and is doing, nothing wrong: The House’s letters were ignored.

Donald Trump just issued a surprise pardon for the man at the center of an epic fight between Google...
Why Netflix’s fantastic new docuseries Cheer is so addictive
This week in TikTok: MAGA meltdowns and Gen Z revolutions
South Korea just changed a longstanding military law for the sake of BTS
Trump’s claim that only immigrants with “the lowest IQ” follow the law was unconscionable
Minneapolis police officer Derek Chauvin charged with murder in the death of George Floyd