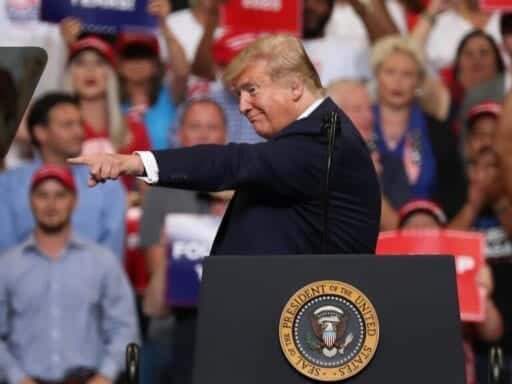 Trump’s polling isn’t great. So he’s using the one play he knows.

President Donald Trump’s speech kicking off his reelection campaign Tuesday made clear how he thinks he can win: through scorched-earth negativity and the politics of resentment.

Speaking in Orlando, Florida — and mostly reading from prepared remarks rather than improvising — Trump launched attack after attack on familiar hate figures: Democrats, the “fake news,” the Mueller investigators, and of course Hillary Clinton.

The speech actually opened on a positive note. Trump thanked his supporters, said he’s restored “government by and for the people,” and bragged about the economy’s performance.

And, just about five minutes in, things took a turn.

“2016 was not nearly another four-year election. This was a defining moment in American history,” Trump said. Then, in a mocking tone, he gestured toward the members of the media present and said: “Ask them, right there.” And in case anyone missed his meaning, he added: “By the way, that is a lot of fake news back there.”

Chants of “CNN sucks” resounded among the crowd.

A Democratic win in 2020, in Trump’s telling, wouldn’t be an ordinary political outcome. It would be the end of the world.

“They would shut down your free speech and use the power of the law to punish their opponents,” he asserted. “They would strip Americans of their constitutional rights while flooding the country with illegal immigrants.”

Trump has not been polling well

The context is that Trump began his presidency in a tenuous political position, elected quite narrowly and likely needing to at least equal if not improve his support to win in 2020 — and has seen his popularity worsen since.

All of this is hardly a surprise, given Trump’s longtime preference for retaining the support of his “base” through polarization and division, rather than trying to unite the country or reaching out to people who don’t already support him.

However, this is more or less how Trump beat Clinton in 2016. Polls showed he was the most unpopular major party presidential nominee ever, as measured by favorability ratings. But Clinton became the second-most unpopular, and it turned out that just enough people in the key swing states ended up turning out for Trump rather than Clinton.

So, this points to Trump’s likely best hope for reelection. He is too toxic to hope for a landslide. But it’s certainly conceivable that he could make the eventual Democratic nominee so toxic to enough voters that he can squeak through with another narrow win.

Broadening his own support would be nice — but he seems more focused on making sure Democrats don’t broaden theirs.

Still, some parts of the speech came off as rather old hat.

In particular, Trump returned again and again to attacking Hillary Clinton, weaving together her email scandal, her campaign’s funding of the Steele dossier, and her use of the word “deplorables” to describe some of Trump’s supporters. He mentioned her eight times in about 80 minutes.

Clinton, of course, will not be on the ballot in 2020. So though Trump did his best to demonize “Democrats” generally and the media, he is still lacking the personal foil on which he usually prefers to rely. He gave brief mentions to “Sleepy Joe” Biden and “crazy” Bernie Sanders, but didn’t dwell much on them just yet.

To truly make his reelection case, that’s what he’s going to have to do: figure out how to destroy the Democratic nominee.

Pope Francis refused to meet with Mike Pompeo so as not to boost Trump
The Vox Book Club kicks off our June discussion of The Princess Bride
Kansas, of all places, is shaping up to be an important 2020 battleground
Early polls show voter support for impeachment is growing
The Supreme Court has blocked a Louisiana abortion law — for now
Don’t let the mass shooters win