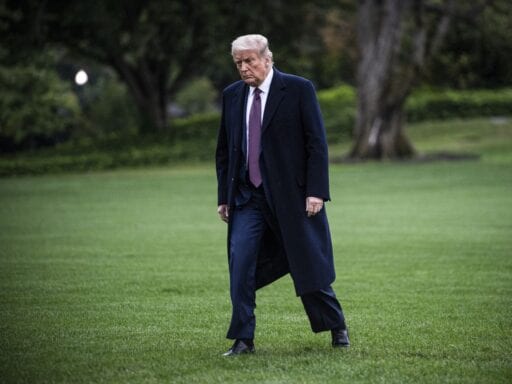 The diagnosis is another reminder of his administration’s failure on Covid-19.

Many questions remain about how and when President Donald Trump was exposed to the coronavirus and if his symptoms will worsen.

But one thing is clear: Trump’s illness is a massive policy failure. Trump and his administration not only failed to protect more than 7 million Americans from the coronavirus, they also failed to protect the president himself. As Brown University School of Public Health dean Ashish Jha tweeted, “I can’t believe he was infected. This is a total failure by [White House] team to protect the President.”

This isn’t just a failure of White House protocols. The failure is emblematic of Trump and his administration’s broader failures on the coronavirus. Over the past few weeks, despite the advice of public health experts, Trump has attended massive rallies as part of his reelection bid, and he’s often refused to wear a mask. He’s also ridiculed his Democratic opponent, former Vice President Joe Biden, for cutting back campaign events in response to Covid-19 and frequently wearing a mask.

According to the Washington Post, Trump’s laissez-faire attitude toward Covid-19 continued even after his team found out that his close aide, Hope Hicks, was potentially infected: “After White House officials learned of Hicks’ symptoms, Trump and his entourage flew to New Jersey, where he attended a fundraiser and delivered a speech. Trump was in close contact with dozens of other people, including campaign supporters at a roundtable event.”

He has, in other words, practiced what he’s told the whole country to do: Go about normal life as if nothing is happening.

From the start of the pandemic, Trump has deliberately downplayed the coronavirus, demanded states reopen too quickly, punted problems with testing and tracing down to local and state governments with more limited resources than the federal government, mocked masks, and tried to politicize public health institutions instead of letting science lead the response.

This was contrary to the advice of public health experts. They called for an aggressive testing and tracing system, one that was used in countries like Germany, New Zealand, and South Korea to quickly isolate the infected, quarantine their contacts, and contain the virus overall.

Embracing the growing evidence for masks, experts also called for the general public to wear masks, and for the country’s leaders to do so to set an example. They called for slow and phased reopenings that prioritized more socially valuable spaces — schools over bars and restaurants — and gave officials enough time to see how things were going, carefully calibrating how much could open and how quickly.

Time and time again, Trump rejected this. He called on states to “LIBERATE” themselves by opening far too early, contributing to surges of Covid-19 across the US over the summer. He questioned the value of masks, suggesting that people wear them to spite him. He called for less testing in the US, arguing that more tests picked up more cases and therefore made the US look bad — leading the Centers for Disease Control and Prevention to temporarily recommend less testing in its guidelines, before abruptly pulling back the change after public criticism.

It’s these failures, according to experts, that help explain America’s massive coronavirus epidemic. The US surpassed more than 200,000 Covid-19 deaths — more than any other country. When controlling for population, the US hasn’t had the highest death rate for Covid-19, but it’s among the top 20 percent of developed nations, and has seven times the death rate of the median developed country. If the US had the same Covid-19 death rate as, say, Canada, more than 120,000 more Americans would likely be alive today.

But Trump didn’t just say and do all of this in an abstract policy sense. He lived it — through his rallies that experts warned against, through his fundraisers and other campaign events, and through his refusal to wear a mask.

The result is the president of the United States has now tested positive for the coronavirus. It’s for similar reasons that millions of Americans have contracted the virus and hundreds of thousands have died of it. It’s yet another failure of Trump and the federal government to protect us — even the president himself — from the disease.