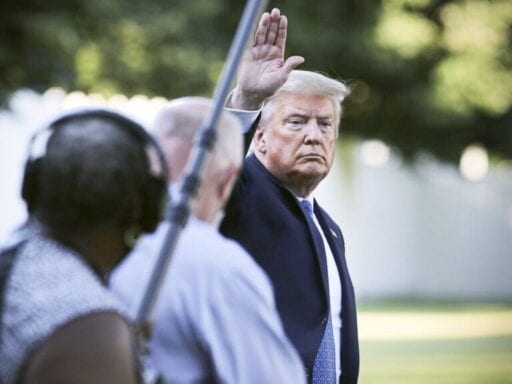 Share
Loading...
President Trump waves to reporters as he returns to the White House after posing for photographs in front of St. John’s Episcopal Church on June 1. | Chip Somodevilla/Getty Images

The president portrayed the protests as violent to justify his militarized response while also attacking Biden for being too tough on crime.

The president spent the morning mostly retweeting right-wing radio host Buck Sexton, who was busy creating a narrative that gangs of lawless rioters were roaming the streets of New York City breaking windows and looting stores.

The Sexton tweets retweeted by Trump were mostly made Monday and referred to the events of Sunday. The host — who had the president on his show in May — also took shots at some of Trump’s favorite political targets, the media and Democrats. “Go through CNN’s official twitter feed right now. It’s a master class in propaganda,” Sexton tweeted Monday, a message retweeted Tuesday morning by the president.

Trump also added commentary to one of his Sexton retweets, using it as an opportunity to suggest the protests could use the presence of more law enforcement.

“The National Guard is ready!” Trump tweeted while quote-tweeting a post from Sexton claiming that protesters smashed out windows on 5th Avenue.

The National Guard is ready! https://t.co/AifVRgWOlM

Sexton’s claim that 5th Avenue stores had “countless windows shattered” was not an accurate one. A Commercial Appeal report recounting the damage done to the city’s retail stores over the weekend said that the Avenue’s luxury stores, like the one shown in Sexton’s photo, were boarded up before the protests and were largely left unscathed.

Beyond misleading photos, the radio host also used the protests — as the president himself has — to attack Democrats. Sexton accused agitators among the protesters of being “Democrats who are ruining cities across the country,” a message also retweeted by the president.

These are Democrats who are ruining cities across the country

Yes, I mean the politicians in charge- but also the rioters. Any of them who votes, will be voting for Joe Biden

Nobody in the media wants to say this, but we all know it’s true. And we shouldn’t let it go.

While there was some looting over the weekend, protesters on Tuesday largely kept things peaceful, with many provocations coming from the police. But in retweeting day-old tweets, Trump, purposefully or not, painted a false — and violent — narrative of Tuesday’s protests.

Trump did so as he’s worked to burnish his image as a leader who will uphold “law and order.” It’s a message he has made subtly through tweets proclaiming his support for police, and explicitly in addresses, like in a speech he gave in the White House Rose Garden Monday when he said, “I am the president of law and order.”

Casting the protests as violent feeds this narrative, as well as the idea that the heavy-handed military response he’s called for — one that some of his own military officials have opposed — is justified.

On Monday, law enforcement officers tear-gassed peaceful protesters in Lafayette Park near the White House in order to clear the way for the president’s photo op at nearby St. John’s Church. The decision has drawn widespread condemnation from faith leaders, including ultraconservative Pat Robertson, who called it “not cool.”

On a videoconference call Monday, Trump berated governors over their responses to the nationwide protests, calling them weak and demanding they “dominate” protesters.

Trump’s response to mainly legitimate and peaceful protests is largely not supported by the public. A Reuters/Ipsos poll of 1,008 adults conducted Monday and Tuesday found that 64 percent of Americans “were sympathetic to people who are out protesting right now,” with 27 percent saying they were not supportive and 9 percent unsure. The poll has a credibility interval of plus or minus 3.5 percentage points.

Additionally, 55 percent said they did not support Trump’s handling of the protests, while just 33 percent approved.

The poll is just one early data point, but it suggests that Trump’s hard-line stance against the protesters could end up having political consequences for him, especially in an election year when he’s largely trailed presumptive Democratic nominee Joe Biden.

Ironically, despite Trump’s attempts to position himself as someone holding the line against chaos, he hit out at Biden in a Twitter thread Tuesday morning for being too tough on crime, citing the former Vice President’s role in the passage of the 1994 crime bill, which is credited with dramatically increasing black incarceration rates in the US.

Trump also repeated one of his favorite claims, that he’s done more for black Americans than any president since Abraham Lincoln, even as he calls on the military to suppress black-led peaceful protests against police violence.

….the possible exception of another Republican President, the late, great, Abraham Lincoln…and it’s not even close. The Democrats know this, and so does the Fake News, but they refuse to write or say it because they are inherently corrupt! See “pinned” above.

Trump’s tweets show how muddled his message is. According to Trump’s Twitter feed, Democrats are responsible for ruining American cities by allowing lawlessness, while also at fault for ruining black families thanks to their law-and-order policies. The dueling narratives simply don’t make sense.