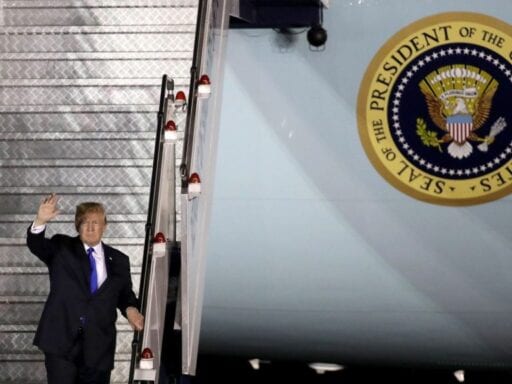 Presidents can invite friends on Air Force One. But it gets complicated when they’re members of your private club.

Being a member of Trump’s Mar-a-Lago club in Palm Beach, Florida, might come with a few additional perks — including tours of Air Force One.

Buzzfeed reports that some members of Trump’s Florida clubs were invited on Air Force One last year, based on invitations and verified through a Freedom of Information Act request. Two tours were scheduled last year on February 18, 2017, according to Buzzfeed:

At least 14 people were scheduled to take those two tours. Although the names of the individuals are redacted, partially unredacted email addresses show eight of those people were affiliated with Arrigo Automotive Group, a family-owned car dealership in the West Palm Beach area.

The leadership of the company — Joe Arrigo and his sons, Jim and John Arrigo, and their wives — have been members of both Mar-a-Lago and Trump International Golf Club in West Palm Beach. Membership records from 2007 obtained by BuzzFeed News list the family as members of both the clubs and specify that Jim Arrigo had been a member of the Trump International Golf Club since 1999, the year it opened.

The invited guests, including Arrigo, wouldn’t confirm that they were invited or took any tour, and last year the White House told Buzzfeed that “it is common for friends/family of the President to receive tours of Air Force One.”

And that is true. It turns one of the pluses of being president is getting to invite your pals onto Air Force One. Previous presidents did it, including Obama, who, for example, once invited Aerosmith for a tour aboard the plane.

The problem is, of course, that the guests who were asked to attend are reportedly members of Trump’s clubs — which means they’re paying thousands as members, making it much harder to separate the friendship and business part.

Americans have gotten used to Trump jetting off to one of his clubs over the weekend — Mar-a-Lago, or Bedminster, in New Jersey. Trump often mixes business and golfing at his clubs. He’s hosted foreign leaders at Mar-a-Lago, including Japan’s Prime Minister Shinzo Abe.

But that has raised some questions on whether Trump is profiting from his presidency. Mar-A-Lago reportedly doubled its initiation fees to $200,000 shortly after Trump became president, and has charged more for tickets to events — including the most recent New Year’s Eve bash. The Buzzfeed report suggests that those higher prices to be a member are coming with even more exclusive benefits.

The Trump presidency is over, and Obamacare is still alive
CNN fact-checked Trump’s RNC speech on air. It took 3 minutes.
Vox Sentences: Your Vox guide to the first debate
A reporter confronted Sarah Sanders about Trump’s habit of insulting black people on Twitter
7 winners and 2 losers from this year’s weird Golden Globes
Why North and South Dakota are suffering the worst Covid-19 epidemics in the US