Trump’s responses to the impeachment inquiry are becoming increasingly incoherent 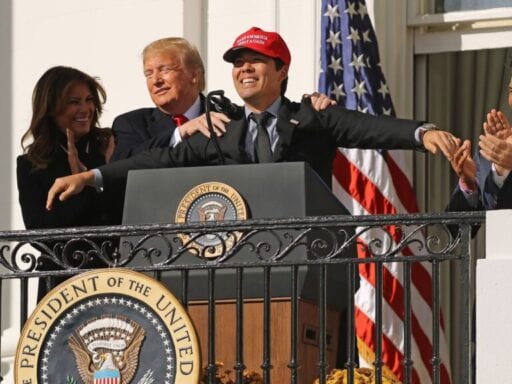 Sunday illustrated how President Donald Trump’s efforts to develop a coherent defense in response to the House’s impeachment inquiry are becoming increasingly incoherent.

First, early Sunday afternoon, Trump held a media availability in which it took him less than a minute to contradict himself about his dealings with Ukraine. He falsely claimed “nobody” with direct knowledge of the phone call in which he tried to leverage the Ukrainian president into politically beneficial investigations came forward to complain about it, but then in the next breath acknowledged that witnesses “only came forward when you [i.e., the media] asked, and some of them are Never Trumpers.”

That claim, too, was false. To cite one notable example, the media played no role in Lt. Col. Alexander S. Vindman’s decision to testify to House impeachment investigators about his concerns about the call, which he was on, and there’s no evidence that Vindman, the top Ukraine expert on the National Security Council, is a “never Trumper.”

“Why are all of these people listening to this absolutely, totally appropriate call, why didn’t they come forward?” — Trump’s new talking point is that if his call with the Ukrainian president was so bad, then why didn’t everybody who listened in on it become a whistleblower? pic.twitter.com/JVYWbtWXyg

Trump’s comments to reporters revealed how he’s flailing for a response to the House impeachment investigation. But on Sunday evening, he topped himself with a tweet that was even more starkly incoherent.

Alluding to a Washington Post report about how a number of Senate Republicans “are ready to acknowledge that President Trump used US military aid as leverage to force Ukraine to investigate former vice president Joe Biden and his family as the president repeatedly denies a quid pro quo,” Trump — who has spent weeks denying there was a quid pro quo in which military aid to Ukraine was being held up unless the government there conducted investigations of political benefit to him — suddenly reversed course by suggesting he may have engaged in a quid pro quo after all. He then asserted “there is nothing wrong with that,” but in the same sentence walked back his seeming reversal by saying, “there is no quid pro quo!”

False stories are being reported that a few Republican Senators are saying that President Trump may have done a quid pro quo, but it doesn’t matter, there is nothing wrong with that, it is not an impeachable event. Perhaps so, but read the transcript, there is no quid pro quo!

So, in a nutshell, Trump’s whiplash-inducing tweet was tantamount to acknowledging a quid pro quo, asserting it was no big deal, but then insisting that in fact it didn’t happen after all.

Trump’s comments to reporters and on Twitter indicate that he’s torn between denying the account of his conduct emerging from witness testimony in the impeachment inquiry — that he used military aid to Ukraine as leverage to try to get the government there to undertake politically beneficial investigations — or on the other hand acknowledging those accounts are accurate and arguing they’re no big deal.

Either of those paths is problematic. Making a case that witnesses are mischaracterizing things is complicated by the fact that a White House-released summary of Trump’s call with Ukrainian President Volodymyr Zelensky has already corroborated key aspects of the emerging story. And making a case that the conduct isn’t a big deal means arguing that cajoling a foreign government into doing political favors for a president is fine and normal.

Trump, however, is trying to have it both ways by insisting both that Vindman (and other witnesses) have their facts wrong and that even if they are right, the conduct they describe is fine. And as a result, his statements are difficult to square with each other — not only over the course of a single day but even within individual tweets.