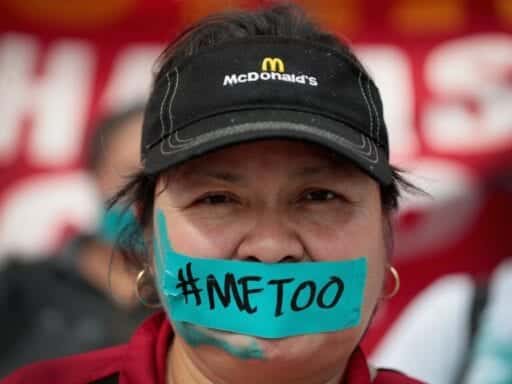 The CEO of McDonald’s was booted from the company Friday after the board of directors discovered that he had a consensual romantic relationship with an employee.

Stephen Easterbrook, who has been the top executive at McDonald’s since 2015, stepped down for his “poor judgment” in violating the company’s code of conduct, according to an SEC filing. The news was first reported by the Wall Street Journal, with few details about the relationship.

Easterbrook’s separation agreement shows that he will get about 6.5 months of severance (his base salary is $1.5 million). As part of the deal, Easterbrook signed a confidentiality agreement and vowed not to work for McDonald’s competitors for two years.

Easterbrook is divorced, and it’s not illegal to have a consensual relationship with a work subordinate. However, the power dynamic is problematic, as a subordinate may feel forced into a relationship to keep his or her job. Corporate executives have long gotten away with this behavior, but that’s starting to change. Easterbrook’s firing shows how strict companies have become about workplace dating as stories of rampant sexual harassment have rocked corporate America.

And yet the move seems like an empty gesture in light of the serious allegations of sexual harassment that McDonald’s restaurant employees have reported over the years.

“[T]he company has refused to listen to us. With the firing of Steve Easterbrook, we now know why. It’s clear McDonald’s culture is rotten from top to bottom. McDonald’s needs to sit down with worker-survivors and put them at the center of any solution,” the Fight for $15 and a Union movement, which is organizing McDonald’s workers across the country, said in a statement Sunday.

Dozens of women have filed gender discrimination complaints against the company since 2016, arguing that McDonald’s has allowed a toxic work culture to flourish at its independently owned franchises. McDonald’s has since rolled out a sexual harassment prevention training for franchise owners, but restaurant workers say it has done nothing to keep them safe. Easterbrook’s firing is a reminder that the company has done very little to protect its most vulnerable workers.

Long before the #MeToo movement became a force to contend with, women who work at McDonald’s have been complaining about widespread sexual harassment at the iconic fast food chain.

Women say they are fed up with supervisors who grope them, ask for sex, and expose themselves on the job. When they report the behavior, managers ignore them, they say, or even punish them. In 2015, women who work at McDonald’s went on strike in Chicago to express their frustration. In September 2018, they went on strike again, this time in 10 cities.

Female McDonald’s employees have filed more than 50 sexual harassment lawsuits and Equal Employment Opportunity Commission complaints in the past three years, according to the Fight for $15 labor movement, which was launched by the Service Employees International Union in 2012. Some of the cases are still under investigation by the EEOC, which is part of the process before workers can sue. The company is currently trying to settle some of the lawsuits that have made it to court. Meanwhile, not much has changed for women who work at the chain.

In May, a group of 25 women in 20 cities filed sexual harassment complaints against McDonald’s with the US Equal Employment Opportunity Commission. Most are new cases that must first go through an EEOC investigation, but a handful involve complaints women filed with the agency last year, which they are now taking to court. In the latest round of complaints, which are included in the tally of more than 50 cases mentioned above, workers as young as 16 have accused supervisors of serious misconduct, including attempted rape, indecent exposure, groping, and sexual offers. The women said they were ignored, mocked, or punished when they reported it. Some had their hours cut back and others were fired.

“Sexual harassment is not something you should have to endure no matter how desperately you need a job,” Maribel Hoyos, who quit her job at a McDonald’s restaurant in Tucson, Arizona, told reporters that in May. Hoyos said she and her teenage daughter, who both worked at the same restaurant, were punished for complaining about a manager who repeatedly groped them and made unwanted sexual advances. “I was passed over for a promotion, my work hours were cut and I was cut out of managers’ training program. Then we fell behind on our rent.”

Before the September 2018 strike, a spokesperson for McDonald’s told the AP that the company had several policies and training programs in place to help franchises prevent harassment, and that they’ve hired experts to help “evolve” those procedures.

In May, in response to the most recent complaints, Easterbrook said that the company recently began offering sexual harassment prevention training to franchise owners and general managers, and that about 90 percent of them have gone through it. He also said the company launched an anonymous hotline to report complaints. It’s unclear what happens after the complaints are filed.

The company, based in Chicago, had been slow to get involved because it doesn’t consider franchise workers company employees. There are more than 38,000 McDonald’s restaurants around the country, but the vast majority (93 percent) are owned by independent franchises companies.

McDonald’s is locked in a labor dispute over whether the fast-food chain is considered a “joint employer,” and is therefore partly liable for labor violations committed by individual franchises. The company argues that it is not a joint employer, so it cannot be held legally accountable for sexual harassment and other illegal workplace behavior at any of its independently owned restaurants. Workers disagree. They say the company has too much control over franchise restaurants and workers to make that claim.

Sexual harassment has been a problem at McDonald’s for decades

America’s most famous burger chain has a history of discrimination investigations that dates back even further than the strikes.

In 2008, a Colorado-based McDonald’s franchise agreed to pay $505,000 to a group of female employees as part of a settlement with the EEOC. In the original lawsuit, attorneys for the EEOC said teenage girls who worked at a restaurant in Denver were subjected to “egregious sexual harassment in the workplace by their male supervisor.” The supervisor allegedly bit their breasts and grabbed their buttocks, and offered favors in exchange for sex.

Then, in 2011, the agency sued the owner of a Wisconsin McDonald’s, claiming that the male employees made sexual comments about the bodies of their female co-workers, propositioned them, kissed them, and groped them without consent. Several of the victims were teenage girls in high school.

“Despite being notified of the situation, [the owner] failed and refused to take prompt and appropriate action to correct the harassment and the resulting hostile environment, forcing at least one of the harassed employees to quit. Further, the company fired other harassed employees after they complained repeatedly about their co-workers’ behavior,” the EEOC said in a press release at the time. The restaurant owners settled the case for $1 million.

These are just a few of the cases that the EEOC agreed to take to court. But most women employees have to pursue cases on their own, which places a huge burden on low-wage workers in the fast-food industry, many of whom are young and may not be aware of their legal rights.

While it’s a good, public-facing step to fire Easterbrook over a consensual relationship, it’s going take a lot more to convince workers that something has fundamentally changed.

The four crucial questions Jeff Bezos needs to answer about his $10 billion climate pledge
The $15 minimum wage bill has all but died in the Senate
“I am humbled by what we’ve been able to create”: Small business owners on when they knew they’d mad...
Target is reportedly censoring words like “Nazi” and “queer” from book descriptions
Birthright citizenship is the third rail of immigration politics
The world’s most profitable company is about to go public