Trump’s speech in Hershey revealed a presidency off the rails 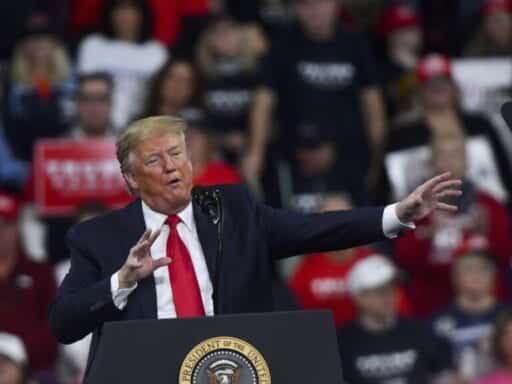 It was one of his ugliest rallies yet — and put the stakes of 2020 in sharp relief.

As House Democrats prepare to vote on articles of impeachment related to his alleged abuse of power and obstruction of Congress, President Donald Trump gave a speech at a campaign rally on Tuesday night in Hershey, Pennsylvania, that highlighted many of the reasons people feel that the country will struggle to withstand another year of this — even in the likely event that the Senate doesn’t end up removing him from office.

Over the course of a more than 90-minute delivery, Trump pushed conspiracy theories and blatant lies, trashed law enforcement officials that aren’t blindly loyal to him, exhibited thuggish tendencies toward protesters, made misogynistic remarks, and demonstrated that he fundamentally misunderstands the Constitution.

It was one of his most troubling performances in recent memory and served as a stark illustration of just how ugly Trump’s reelection campaign will be.

As the president, Trump has access to information and briefings from some of the world’s top intelligence professionals. And yet he can’t seem to stop himself from spreading rumor and innuendo in an effort to demean his political foes.

During a portion of his speech on Tuesday in which he demeaned both the FBI rank-and-file and bureau leadership, Trump out of nowhere suggested, without evidence, that former FBI agent Lisa Page took out a restraining order against former FBI agent Peter Strzok. Strzok and Page became become right-wing punching bags and the subject of conspiracy theories after it was revealed that while in the course of having an affair with eachother during their FBI tenures, the two shared personal text messages in which they expressed anti-Trump opinions.

“Did I hear he needed a restraining order after this whole thing, from Lisa? That’s what I heard. I don’t know if it’s true,” Trump said.

Trump spreads unsourced rumors about Lisa Page taking out a restraining order on Peter Strzok: “Did I hear he needed a restraining order after this whole thing, from Lisa? That’s what I heard. I don’t know if it’s true.” #BeBest pic.twitter.com/h6W3YMrlpo

Page herself later tweeted that Trump’s claim is “a lie,” adding, “Nothing like this ever happened.”

It obviously doesn’t take much to debunk a claim of this sort. But the point is that the president is shameless enough to push them in the first place. Fact-checks and logical reasoning have a hard time dealing with Trump’s firehose of nonsense.

“You have great people in the FBI, but not in leadership.”

Trump’s comments about Strzok and Page were part of his broader attack on the FBI. Hours after Trump lashed out at FBI Director Christopher Wray for telling the truth about an Inspector General report that concluded the origins of the bureau’s Russia investigation weren’t tainted by political bias, Trump took aim at his hand-picked director once again.

Later, while lamenting how the FBI “destroyed the lives of people” who were associated with his campaign — a comment alluding apparently to people like Paul Manafort and Roger Stone — Trump referred to FBI agents as “scum.”

“Their lives have been destroyed by scum, ok? By scum,” Trump said, before hyping a forthcoming report by US Attorney John Durham that apparently will be harsher on the FBI than the just-released IG report.

Not only were these comments ugly, but they demonstrate how Trump demands total personal loyalty from law enforcement agencies that in theory are supposed to operate independently of partisan politics. But to Trump, if the FBI director speaks the truth and refuses to validate conspiracy theories about anti-Trump bias in the FBI, then he’s not the right person for the job. If bureau brass goes after his associates, they’re “scum.” If the Inspector General was appointed by Barack Obama, then his work is inherently suspect.

Trump has been accused of sexual misconduct by more than 20 women, and yet during his speech in Hershey he tried to politicize sex crimes committed by undocumented immigrants. He gloated about how his use of a racial slur hurt Sen. Elizabeth Warren’s poll numbers — “she opened that fresh mouth of hers and it stopped,” he said — and at another point, told a story in which he referred to Warren’s marriage as “a phony, disgusting deal.”

“That’s her husband, he’s supposed to be living in the house. I don’t think she’s seen him for 10 years … did you ever see such a phony, disgusting deal?” — Trump, who reportedly doesn’t share a room w/Melania, attacks Warren for posting corny social media videos w/her husband pic.twitter.com/otOdds7LLZ

When his speech was disrupted by a protester, Trump lamented that security wasn’t rougher with her, saying, “that particular guy wanted to be so politically correct. Ahhh! Ahhh! We don’t want to be political correct!”

“Law enforcement is so great. That particular guy wanted to be so politically correct. Ahhh! Ahhh! We don’t want to be political correct” — Trump laments that arena security wasn’t rougher with a female protester pic.twitter.com/GdkEbzZUHQ

Later, Trump referred to House Intelligence Committee Chair Adam Schiff as a “crooked bastard” and seemed to barely catch himself from wishing physical harm upon him.

But perhaps even more ominously, Trump warned of doomsday if he doesn’t win reelection next year.

“At stake in our present battle is the survival of the American nation itself. We will destroy our country if these people get in,” Trump said.

When he wasn’t warning of the apocalypse if he doesn’t win a second term, Trump teased shredding the Constitution by serving as many as 29 years in office.

“Should we give it a shot? Maybe we will. I’m only kidding” — Trump muses about shredding the Constitution and serving as many as 29 years in office pic.twitter.com/TeyhCCuEJn

Though Trump took pains to point out that he’s kidding, this particular “joke” has become such a staple of his speeches that one can’t help but wonder.

Less than a week after video of Canadian Prime Minister Justin Trudeau and European leaders mocking him at a NATO summit went viral, Trump claimed, absurdly, that “this country is so respected. And we were not respected four years ago. We were laughed at.” And just hours after a federal judge blocked his plan to spend billions of military dollars on his border wall, Trump said “we’re building it and it’s fine and we have the military money coming in from the military. Believe me … we started winning in court.”

On the same day that a federal judge blocked Trump’s plan to spend billions of military dollars on his wall, he claims, “we’re building it and it’s fine and we have the military money coming in from the military. Believe me … we started winning in court.” pic.twitter.com/r9BIbb3GBO

Trump described the whistleblower complaint that initially sounded the alarm about his dealings with Ukraine as incorrect, despite the fact that every key allegation in it has been corroborated. As his speech wound down, Trump proclaimed “we support, protect, and defend the Constitution of the United States.” But earlier in the speech he described Democrats’ efforts to follow the impeachment process as specified in that very same Constitution as an attempt to “overthrow our democracy.”

Many more examples of ugliness from just Trump’s speech in Hershey could be cited. He sensationalized crimes committed by undocumented immigrants in gory detail — “last summer at least 19 illegal aliens were charged in connection with grizzly homicides, including hacking victims to death and ripping out, in two cases, their hearts,” he said — and made a variety of false accusations against Democrats, including that they want “to get rid of religion” and support infanticide. He also expressed his usual tragicomical level of ignorance about how wind energy works.

“Darling I want to watch television tonight and there’s no damn wind, what do I do?” — Trump still thinks that wind energy means people won’t be able to watch TV reliably pic.twitter.com/w6xwi9qgfL

The dark spectacle doesn’t necessarily bolster Democrats’ impeachment case, but it does illustrate what the stakes are — not only of a possible impeachment trial, but of the 2020 campaign. Watching Trump deliver such a nakedly authoritarian speech behind the presidential seal made it hard to shake the thought that the election that really mattered was 2016.