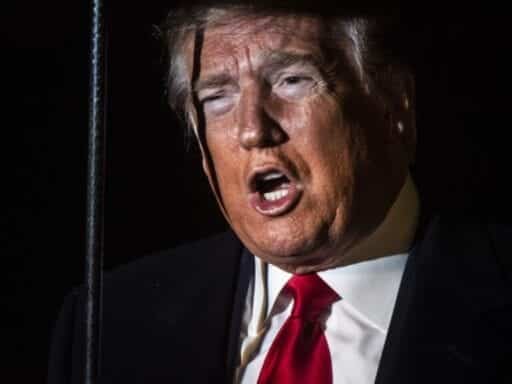 Trump bullied his 2020 rivals — calling them short, a communist, and a liar — and praised himself.

Presidents giving interviews before Super Bowls has become a tradition — Obama fielded questions about Benghazi and his detractors; Trump has answered questions about the immigration and the turnover on his staff.

While the questions can be tough, given the spirit of the day, these interviews aren’t alway the most rigorous of exercises. But Trump found himself before an exceptionally friendly interviewer this time around, sitting down with Fox News’ Sean Hannity ahead of the game between the Kansas City Chiefs and San Francisco 49ers.

Their conversation was less of an interview and more of an opportunity for the president to attack against his enemies unchecked for just over eight minutes — railing against Democrats who impeached him, making bizarrely incorrect claims about the 2020 Democratic presidential field, and even making height jokes about former New York City Mayor Michael Bloomberg.

When asked about whether he’d be able to work with Democrats following his impeachment, the president replied he wasn’t sure, saying, “I see the hatred — they don’t care about fairness, they don’t care about lying,” a statement that could not be heavier with irony given Trump’s own well documented difficult relationship with the truth.

Trump claims to Hannity, without any caveats whatsoever, that “me and this administration — we’ve done more than any administration in the history of our county.” pic.twitter.com/pzDgpVY7Te

Hannity nodded in agreement, as Trump went on, saying, “the whole thing was nonsense,” that is was “very, very unfair,” and that “my family suffered because of all this, and many other families suffered also.”

He did not address his role in pressuring Ukraine to dig up dirt on his political rivals, or the White House’s refusal to cooperate in the impeachment inquiry. Instead, the president accused Democrats of impeaching him in hopes of brightening their 2020 prospects, saying, “They just want to win; it doesn’t matter how they win.”

In a lightning round, in which Hannity encouraged the president to say the first thing that came to mind, Trump attacked Democratic presidential candidates.

“Look at Sleepy Joe, what’s going on with him? He’s having a hard time,” Trump said of former Vice President Joe Biden. Sen. Elizabeth Warren, he accused of being a liar, saying, “I call her ‘Fairy Tale’ because everything’s a fairy tale … this woman can’t tell the truth.”

Sen. Bernie Sanders, Trump claimed, is a “communist” who got married in Russia. The claim prompted Hannity’s only attempt to correct the president; the Fox News personality reminded the president that the candidate actually took a trip to the then-Soviet Union shortly after his marriage, and that he wasn’t married there.

Trump did, however — as he has recently done on Twitter — claim the Democratic National Committee is not being fair to Sanders, seeming to reference reports of some disquiet among certain Democrats about Sanders’s recent rise in the polls by claiming the Democratic Party is “rigging it against him,” echoing discord following the 2016 Democratic primary.

The president had perhaps his harshest words for Bloomberg. He again criticized the DNC in speaking of Bloomberg, arguing it was unfair the party changed the debate rules in a manner that seems to benefit the mayor, before attacking Bloomberg for being short. (Bloomberg is about 5’8”).

“He wants a box for the debates, why should he be entitled to that?” Trump said. “Does that mean everyone else gets a box?”

Trump leveled similar attacks against Bloomberg Sunday morning on Twitter, writing, “Many of the ads you are watching were paid for by Mini Mike Bloomberg. He is going nowhere, just wasting his money, but he is getting the DNC to rig the election against Crazy Bernie.”

Bloomberg’s campaign responded with a statement that reads: “The president is lying. He is a pathological liar who lies about everything: his fake hair, his obesity, and his spray-on tan.”

The president did make some positive statements — about himself.

He claimed that thanks to his hard work, “there’s a revolution going on, I mean a positive revolution,” particularly among minority communities, whose lives he said have become better under his watch.

He also took credit for a strong economy, for having done a “tremendous job” assisting China in its fight against the coronavirus, and summed up his time in office like this: “Nobody’s made achievements like we’ve made, so many different things.”

Trump on the State of the Union: “We’re gonna talk about the achievements that we’ve made … I’m so proud of what we’ve done for our vets, with choice.” (The legislation Trump is referring to was actually signed into law by President Obama in 2014.) pic.twitter.com/3KnGk7pFyp

These sorts of statements aren’t new, or even unexpected from the president — he talks like this all the time on Twitter, at his rallies, and at press conferences. However, this marks the first time he has been able to deliver such statements unchecked before such a large and diverse audience — everyone watches the Super Bowl, not just Trump fans or journalists.

It also isn’t surprising that Hannity — who is good friends with Trump — did not try to correct him except for his remark about Sanders. But the fact that this all ought to have been expected does not make it any less disturbing that the president of the United States was given almost ten minutes to address the nation, and spent it not answering pressing questions of national concern, but attacking his rivals in incredibly petty ways.

Manhattan is one of the best, most unheralded dramas of the 2010s
The 2020 summer Olympics will be postponed due to coronavirus, says IOC official
Elizabeth Warren can’t escape the  Medicare-for-all funding debate — even on SNL
The Iowa Republican caucuses you didn’t know were happening, explained
What’s at stake if Trump gets to replace Justice Ruth Bader Ginsburg
7 winners and 8 losers from Game of Thrones’ final season premiere