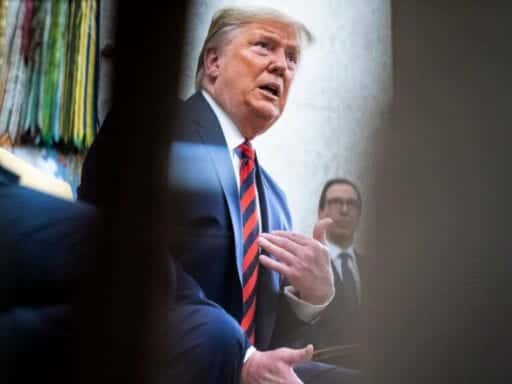 Trump still thinks his own intelligence agencies are wrong about who hacked the DNC — and he wanted Ukraine’s help to prove it.

It hasn’t received as much attention as his efforts to get the Ukrainian government to investigate Joe Biden and his son, but the “transcript” of President Donald Trump’s phone call with Ukrainian President Volodymyr Zelensky also indicates that just a day after special counsel Robert Mueller’s testimony before Congress, Trump was seeking help in trying to undermine the foundations of the Russia investigation.

According to the White House’s account of Trump’s July call with Zelensky, the Ukrainian president obliquely brought up military aide that the Trump administration had mysteriously put on hold just days earlier by referring to specific pieces of equipment he intended to buy once the money came through.

Trump responded by telling Zelensky, “I would like you to do us a favor though.” He went on to ask him for a confusing favor related to a cybersecurity firm, a billionaire, and a computer server — but its subtext seems to be that Trump wanted help uncovering evidence that he believes would indicate that Russia was framed for hacking the Democratic National Committee (DNC) in 2016.

“I would like you to find out what happened with this whole situation with Ukraine, they say Crowdstrike … I guess you have one of your wealthy people … The server, they say Ukraine has it,” Trump said, according to the White House. (The ellipses are in the “transcript,” which could be benign pauses or could suggest the White House may have withheld some information, a la Attorney General William Barr’s misleading letter to Congress about the Mueller report ahead of its public release.)

CrowdStrike, for those who may not remember, was the cybersecurity firm that the Democratic National Committee (DNC) used to investigate hacks against it back in 2016. It concluded that Russia was responsible, a finding later backed up by the US intelligence communities and special counsel Robert Mueller. But Trump apparently still believes that his own intelligence agencies have it wrong.

CrowdStrike cooperated with the FBI’s investigation of the hacks but Trump has nonetheless repeatedly pushed baseless conspiracy theories suggesting that information was somehow withheld from the bureau because CrowdStrike didn’t turn over a physical server to the FBI, and was therefore involved in a cover-up that resulted in the Russia investigation. (This isn’t how the relevant technology works, but more on that later.)

For a sense of how grounded in reality this “inside job” conspiracy theory about the DNC hack is, it’s worth pointing out (as Josh Marshall of Talking Points Memo did) that, broadly speaking, it’s the same one that holds that DNC staffer Seth Rich was murdered by a DNC-affiliated hit squad for leaking the emails to WikiLeaks.

During a bilateral media availability with Zelensky at the United Nations General Assembly on Wednesday, Trump alluded to the “Crowdstrike” conspiracy theory and said that his personal attorney, Rudy Giuliani, is “looking to also find out where the phony witch hunt started, how it started.”

President Trump: “There was no pressure.”

Once Trump asked Zelensky for some help trying to discredit the origins of the Russia probe during their phone call, he apparently turned to more forward-looking concerns.

According to the White House’s summary of the call, after Zelensky promised to help Trump out with email-related stuff, Trump then brought up “[t]he other thing.” He went on to ask Zelensky to work with Attorney General William Barr on an investigation of Democratic presidential candidate Joe Biden and his son.

Trump’s ask regarding the Bidens has received more attention — and understandably so, since it amounts to the president asking a foreign government to essentially serve as the opposition research arm of his political campaign. But Trump’s reference to “Crowdstrike” is also significant, illustrating as it does the president’s continued fixation on the Russia investigation, not to mention the fact that he continues to disbelieve the consensus conclusion of his own intelligence agencies.

Based on the White House’s “transcript,” Trump seems to think that Ukraine was in possession of an email server containing Clinton’s emails. There’s just one problem: It doesn’t really work like that.

As Lonrenzo Franceschi-Bicchierai explained for Vice, the ask Trump made to Zelensky regarding “Crowdstrike” rests on a fundamental confusion that he can’t seem to shake: that “a very rich Ukrainian” is somehow in physical possession of the DNC server:

In reality, there’s no missing server, and both CrowdStrike and the US government concluded that Russian government hackers broke into the DNC.

In a 2017 interview with the Associated Press, Trump said CrowdStrike is “Ukraine-based” (fact check: it’s based in Sunnyvale, California, and has a big office in Arlington, Virginia).

So, to recap, it seems that Trump is saying that CrowdStrike, an American company, is actually Ukrainian. That’s why he’s asking the new President of Ukraine, a former comedian by the way, to help him find a missing server that actually does not exist.

In short, Trump doesn’t really know what he’s talking about and hence made a nonsense ask of Zelensky. But Zelensky, likely in his desire to appease Trump and receive the held-up US aid, indulged him anyway.

Though the White House’s “transcript” provides strong evidence that Trump linked releasing the military aid to Zelensky’s willingness to help him dig up dirt on Biden, Trump has this week alternately claimed the hold-up was over concerns about “corruption” and European countries not spending their share on foreign aid. Perhaps even he realized that the truth about him continuing to solicit foreign help to discredit his political rivals — and in this case seemingly using foreign aid as leverage — would be publicly untenable.

Vox Sentences: Hackers are holding cities hostage
There are far worse things than polarization
Republican Kelly Loeffler and Democrat Raphael Warnock advance to Georgia Senate runoff
The High Note’s ambitions aren’t as big as its characters’ dreams. But it’s still fun.
Why do gender reveals unleash so much destruction?
6 reasons to be skeptical of Trump’s calls to reopen the economy