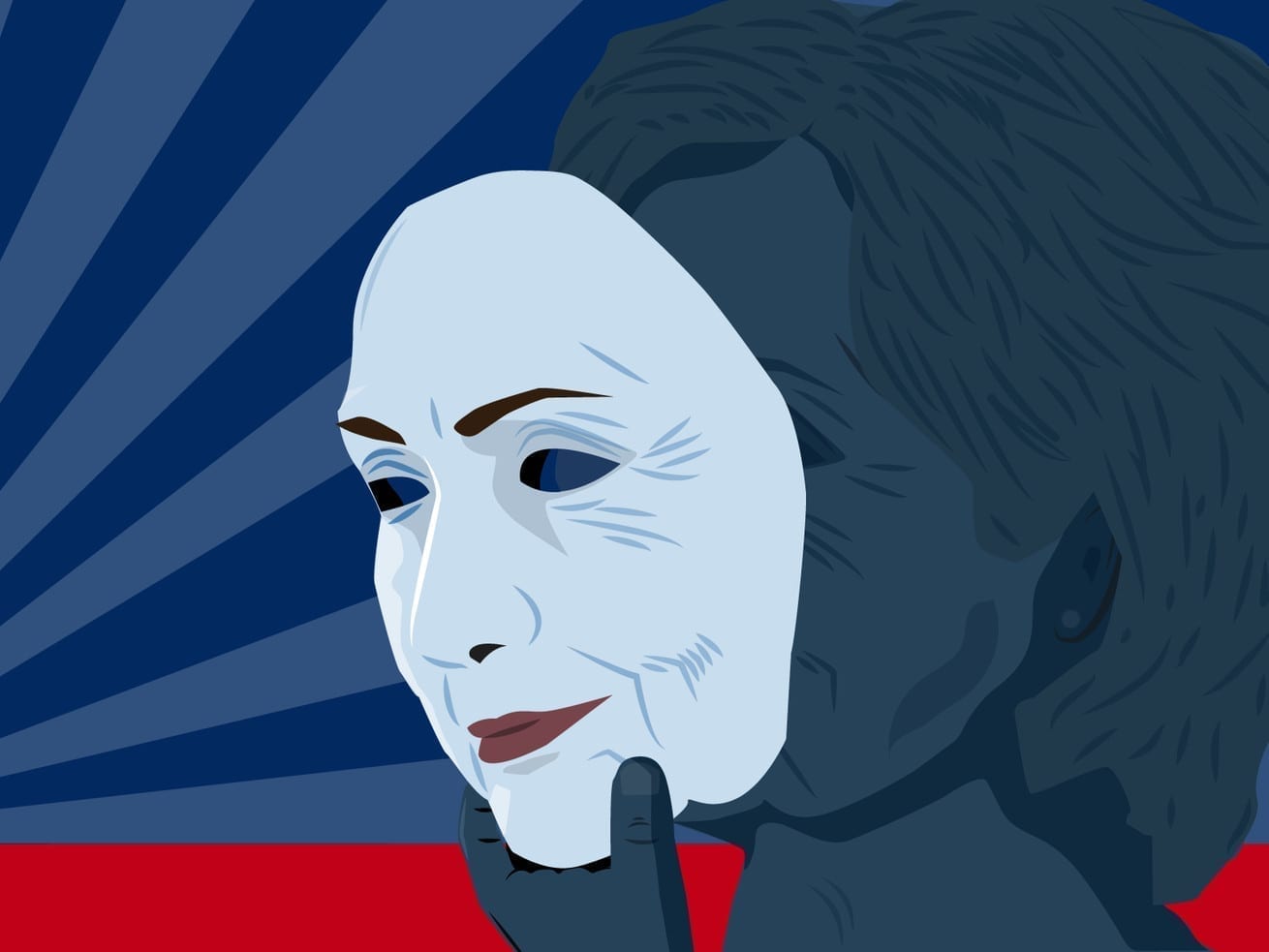 Halfway into one of the most scandal-plagued chapters of the presidency, Fox News still needs the “Hillary” villain.

Hillary Clinton has played no active role in our politics since she lost the 2016 presidential election. She has watched from the sidelines as Donald Trump writes one of the most scandal-plagued chapters of the American presidency.

But on Fox News, the character “Hillary Clinton” still plays a crucial part in the story.

I call her a character because the value Fox News finds in Clinton is largely a narrative one. Fox News has devoted itself to painting Trump as a protagonist, which can be hard given the scandals, the incompetence, and the cruelty. But with the perfectly crafted villain, anyone can be made a hero.

And that villain is, still, Hillary Clinton.

Since Trump’s inauguration, Fox News has consistently covered Clinton more than other cable news channels — by a wide margin.

If you forced a robot to watch Fox News for the last six months — which is what the TV News Archive did — it would’ve seen Clinton’s face more than 2,000 times. That’s six times more than CNN.

And it’s not like Clinton has generated news. Rather, Fox News has often used Clinton as a non sequitur.

When Homeland Security Secretary Kirstjen Nielsen was confronted by protestors during dinner because of her role in the separation of immigrant families, Fox News host Sean Hannity’s reaction was: “Hillary? Nancy Pelosi? Elizabeth Warren? Where are you?”

When Fox News ran out of Clinton news to cover in January, it sent Jeanine Pirro to a dry cleaner near Clinton’s home in Chappaqua, New York, where she asked strangers about Clinton’s pantsuits.

The day Supreme Court Justice Anthony Kennedy retired, Hannity explored an alternate universe: “Hillary Rodham Clinton now would be making now a second appointment in the terms of the judicial courts of American history.” Hannity believed Trump would pick a replacement who would uphold the Constitution, which is “sadly the exact opposite of what Democrats and people like Hillary would want.”

This “Hillary” character — in which Fox News has found so much value — isn’t a post-2016 invention, nor is it purely a Fox News creation. Rather, it’s the product of 30 years of character development by the media and her opponents, which has resulted in a blunt storytelling tool for the pro-Trump news network.

The three decades of building up the “Hillary” character

Shawn Parry-Giles, a University of Maryland communication professor, has been recording Clinton news segments since 1996. She now has cabinets full of VHS tapes capturing nearly 1,200 broadcast stories, which she wrote about in her 2014 book.

“Once someone’s image gets cemented in popular culture or in the press, with contributions by opposition, it’s hard to break away from that,” Parry-Giles told me.

For Clinton, that image was cemented very early. Parry-Giles argues that the most “formative media moments” for Clinton was a 1992 interview in during her husband’s presidential campaign. Pushing back against the notion that she’s staying with Bill for political reasons, Clinton said, “I’m not sitting here some little woman standing by my man like Tammy Wynette.” The next day, she reiterated this sentiment:

Parry-Giles argues that this feminist characterization is what became entrenched as the “true” Hillary Clinton, and she would be penalized for any hints of evolving away from this image.

Over two decades, Fox News made Mrs. Clinton one of the longest-running villains on TV. Mr. Ailes would rewrite her part over the years: In the 1990s, she was a bra-burning affront to stay-at-home mothers; in her Senate race, she was an entitled wife riding on her husband’s coattails; by the 2008 primary, she was Lady MacBeth, desperate to star in her own production.

In 2016, Mr. Ailes made Mrs. Clinton, a centrist Democrat whose most audacious campaign promise was that she wouldn’t over-promise (“we don’t need any more of that”), seem like a cross between Saul Alinsky and Ramsay Bolton.

But it wasn’t just Fox.

During the 2008 election, Parry-Giles found that several pundits insinuated Clinton had a “lack of political authenticity in favor of political expediency.” In a conversation with MSNBC’s Tucker Carlson, the Los Angeles Times’s Rosa Brooks said the last time they saw the “real Hillary” was in 1992, during the Tammy Wynette interview. CNN’s Carol Costello openly pondered whether Clinton was choosing a “mantle of feminism” in favor of “political masculinity.” Carl Bernstein of Watergate fame wrote an autobiography of Clinton, in which he described Clinton as a “very much camouflaged woman,” even as he called her a highly qualified candidate.

This idea that she was always hiding something was the dominant theme of most Hillary Clinton coverage in recent years. During the 2016 election, the most-covered story on the front page of the New York Times was Clinton’s email scandal — covered far more than Trump’s Muslim ban proposal.

On the evening news, Clinton’s emails got more airtime than all policy stories combined.

All of this built up the narrative that Clinton was hiding something — that she was deceiving the public, hiding her authentic self, for political power.

Once Clinton lost and Trump became president, much of this narrative went away.

Not on Fox News.

After every presidential election, the losing candidate continues to play a role as the face of the losing party.

We can see this trend with both John McCain after his 2008 loss and Mitt Romney after his 2012 loss. But the residual coverage of Clinton far surpasses them on all networks.

Of all the cable networks, it’s Fox News that has gotten the most mileage from this character.

Last fall, congressional Republicans and Fox News pushed the Uranium One conspiracy — the idea Hillary Clinton personally benefited from sale of uranium to Russia. This is untrue.

When Fox News reports on FBI special counsel Robert Mueller’s investigation of the Trump campaign’s ties with Russia, they make sure to bring Clinton into the story.

They say it was Clinton who started this witch hunt — that it was her campaign that paid for the “fake Russian dossier,” which eventually led to the investigation. (The Clinton campaign did pay for the dossier, but we don’t know how much of a part it played in the initial FISA warrant, despite top Republicans trying to prove otherwise.)

Sometimes, they just use Clinton as a foil to show that, no matter what Trump did, Clinton is way worse.

When there is news that legitimately involves Clinton, Fox News ramps up its coverage.

The network was particularly interested in the Justice Department’s inspector general’s report, which looked at the FBI’s handling of the Clinton email investigation.

Many Fox News pundits, including Hannity, believed it would show the FBI was protecting Clinton — that there was an alternate justice system for elites like the Clintons. (It showed no such thing.)

All of these narratives are complex. It requires a bit of mental gymnastics to justify Clinton being the topic of these stories.

But it all makes sense for Fox and its viewers.

”What Fox wanted was the president having sex in a room Reagan wouldn’t walk into without a jacket on,” Lucianne Goldberg, a regular Fox News guest during Bill Clinton’s presidency, told Gabriel Sherman.

And on Fox News, there’s nothing simpler than “Hillary.”

Pence got the Covid-19 vaccine to build confidence in it. Trump supporters could use more of it.
Amy Klobuchar drops out of the 2020 presidential race
The Constitution’s ban on “cruel and unusual” punishment is in grave danger from the Supreme Court
These are the Trump associates who’ve pleaded guilty in the Mueller probe
Workers need to be part of the conversation about UBI, says “Beaten Down, Worked Up” author Steve Gr...
Congressional candidate talks sexual abuse in political ad