US citizen spouses and children of unauthorized immigrants were shut out of stimulus relief. Now they’re suing. 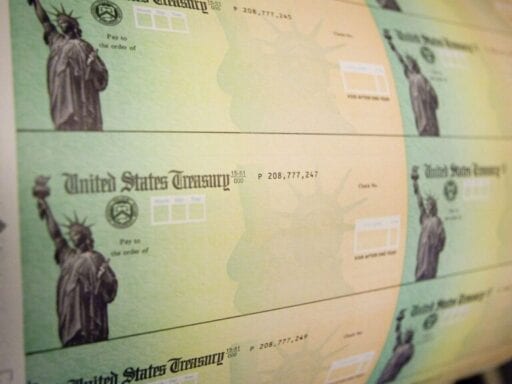 Economic stimulus checks are prepared for printing at the Philadelphia Financial Center May 8, 2008 in Philadelphia. | Jeff Fusco/Getty Images

Immigrant advocates are arguing in court that American citizens who are married to unauthorized immigrants should still be eligible for stimulus checks along with their children.

The $2 trillion Coronavirus Aid, Relief, and Economic Security Act, or CARES Act, gives most taxpayers up to $1,200 and $500 for each of their children under the age of 17. But even if they pay taxes, unauthorized immigrants are not eligible for the stimulus checks, which the government started sending out in April. Neither is anyone else in their household, including their spouses and children, even if their spouses and children are US citizens.

Advocates from Georgetown Law and Villanova Law filed a class action lawsuit in Maryland federal court on Wednesday challenging the CARES Act on behalf of seven US citizen children of unauthorized immigrant taxpayers. They argued that it unfairly discriminates against these children based on their parents’ immigration status and denies them equal protection under the law in violation of the US Constitution’s due process clause.

Immigrant advocates at the Mexican American Legal Defense and Education Fund also filed a lawsuit last week arguing that the CARES Act is unconstitutional because it “discriminates against mixed-status couples.”

“The refusal to distribute this benefit to US citizen children undermines the CARES Act’s goals of providing assistance to Americans in need, frustrates the Act’s efforts to jumpstart the economy, and punishes citizen children for their parents’ status — punishment that is particularly nonsensical given that undocumented immigrants, collectively, pay billions of dollars each year in taxes,” Mary McCord, legal director of Georgetown Law’s Institute for Constitutional Advocacy and Protection, said in a statement.

How the CARES Act penalizes unauthorized immigrants and their families

The bill excludes those in households with people of mixed immigration status, where some tax filers or their children may use what’s called an Individual Taxpayer Identification Number (ITIN).

The IRS issues ITINs to unauthorized immigrants so they can pay taxes, even though they don’t have a Social Security number. If anyone in the household uses an ITIN — either a spouse or a dependent child — that means no one in the household will qualify for the stimulus checks unless one spouse served in the military in 2019.

If the law is allowed to stand, it could impact an estimated 16.7 million people who live in mixed-status households nationwide, including 8.2 million US-born or naturalized citizens.

The exclusion for mixed-status households defies current practices: Many other federal programs are designed in such a way that US citizen children of unauthorized immigrants can access necessary benefits, including the child tax credit, food stamps, housing assistance, welfare benefits, and benefits from the Special Supplemental Nutrition Program for Women, Infants, and Children.

But there is a precedent for this kind of exclusion. Amid the global financial crisis in 2008, Congress handed out tax rebates to most American taxpayers, except for the spouses of immigrants who didn’t have Social Security numbers.

What the exclusion means for mixed-status families

Most of the families of the children named in Wednesday’s lawsuit have a combined income of no more than $30,000 and, absent financial support from the federal government, are struggling to stay afloat.

One parent, identified only as N.R. in the complaint, lost her job at a restaurant during the pandemic and her partner has also been unable to work because he contracted Covid-19. The family has no income and depends on community support as well as food from her child’s school system in order to survive.

Another parent, C.V., lost her job at a catering company and has had to pick up part-time work at a restaurant, but she fears that she won’t be able to pay rent and will be evicted along with her child. And H.G.T., who has three children, hasn’t been able to afford internet access, which has become necessary as her older children try to attend school online.

Mixed-status couples are also suffering from being denied stimulus checks. Sarah and her husband Juan, who asked to be identified only by their first names to protect their privacy, are one such couple living in Evansville, Indiana. She is a born-and-raised US citizen, but he came to the US 14 years ago from Honduras without authorization, seeking to earn enough money to support his parents and siblings back home.

The couple married three years ago, and shortly thereafter, she started the process of sponsoring him for a green card. He’s still waiting for an interview at a consulate in Honduras, which has been postponed on account of the pandemic. But if all goes to plan, he will soon have permanent residency and be issued a Social Security number.

In the meantime, however, Juan is still living in the US as an unauthorized immigrant, filing taxes under an ITIN. Neither he nor Sarah, therefore, are eligible for stimulus checks.

Sarah is continuing to work from home during the pandemic, working in medical billing and making $45,000 a year. And Juan chose to take a month off from his job in painting and construction because they feared he would contract the virus at work, but he is now back on the job. She said that, together, they make a decent living, but they do have a lot of expenses, including his biweekly $120 remittances for his family in Honduras so they can buy food and pay their water and electric bills.

Still, she’s angry that both she and her husband are being penalized during the pandemic.

“While not receiving the stimulus hasn’t been a burden, it feels like a slap in the face as a US citizen that even I won’t get it,” she said. “I, personally, am not opposed to my tax dollars paying for undocumented immigrants receiving aid during this pandemic, but I can understand why our government wouldn’t do this. But me? A US citizen? I’m insulted and angry. I feel like my country does not care about me in the slightest.”