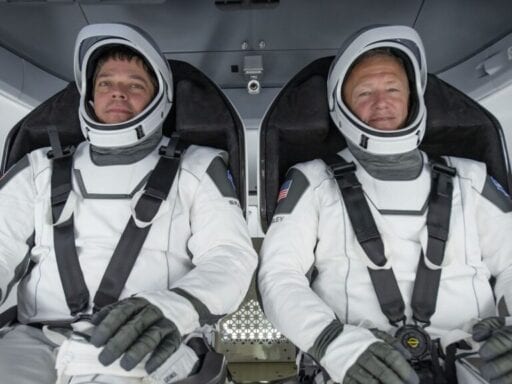 Elon Musk is about to send humans into space. The billionaire’s rocket ship company SpaceX is scheduled to launch its first crewed spaceflight on Saturday afternoon. If all goes as planned, Crew Dragon Demo-2 will be the first time humans have taken off for space from American soil since the NASA Space Shuttle program’s final mission in 2011. It will also be the first crewed spaceflight from a private company, ever.

The launch was originally scheduled for Wednesday, May 27, at 4:33 pm ET, but about 15 minutes before take off, it was scrubbed due to weather. According to NASA, the issue was the “strength of electric fields in the atmosphere.” The new launch is set for Saturday at 3:22 pm ET.

Whenever the launch does end up happening, the stakes will be high. A successful mission may begin a new era of space exploration, taking it out of the hands of governments and the public sector and into the hands of private businesses. If Demo-2 fails, it could be a long time before crewed spaceflights return to the United States.

Using $100 million of his PayPal payout, Musk founded SpaceX back in 2002, predating his Tesla car company by more than a year. As the story goes, Musk wanted to put plants on Mars, but it was too expensive to acquire the rockets to do so. So he started his own company, SpaceX, to see if he couldn’t get those costs down. In early years, the venture seemed destined for failure: Between 2006 and 2008, the first three launches of its privately funded Falcon 1 rocket failed. But the fourth SpaceX rocket succeeded later in 2008, and the fifth carried a satellite into orbit in 2009.

After this — and with some funding from NASA — SpaceX accelerated development of the Falcon 9 which first took flight in 2010. This two-stage rocket powered by nine Merlin engines has now launched 83 times, carrying cargo including satellites into orbit and supplies to the International Space Station (ISS). It’s failed just twice: once in flight in 2015 and once on the launch pad in 2016. It’s the first and only orbital rocket that’s partially reusable, which significantly cuts down on operating costs.

There’s also the Falcon Heavy, a heavy-lift launch vehicle that looks like a Falcon 9 rocket with two Falcon 9 boosters strapped to the sides. On its 2018 maiden voyage, it sent a Tesla into space, complete with a dummy driver clad in a spacesuit. It’s still up there somewhere. On the second Falcon Heavy launch, all three rockets returned safely to Earth. After the third and most recent launch, the Falcon Heavy earned certification from the National Security Space Launch (NSSL) program, which is part of the United States Space Force.

Impressive and unexpected as the success of SpaceX has been, Elon Musk still has his sights set on greater things. The company’s most ambitious project yet, the SpaceX Starship, is currently underway. Intended to be a fully reusable, stainless steel, heavy-lift launch vehicle that would tower over the iconic Saturn V rocket developed for the NASA Apollo missions, the Starship is supposed to go to the Moon, Mars, “and beyond.” In fact, NASA has already included the Starship on its list of commercial launch systems for the Artemis missions which are scheduled to land a man and a woman on the moon by 2024.

The next step toward its more ambitious goals begins with the plan to launch the first private crewed space flight. Two NASA astronauts, Robert Behnken and Douglas Hurley, will ride to the launch site at Florida’s Kennedy Space Center in a white Tesla emblazoned with the NASA logos. Wearing custom SpaceX pressure suits, the two astronauts will get in the Crew Dragon capsule which will sit on top of a Falcon 9 rocket.

SpaceX obviously wants everything to go exactly as planned. Stormy weather off the coast of Florida delayed the launch on May 27. If the May 30 date is also cancelled, the next possibility would be Sunday, May 31. If it’s successful, its first crewed mission could set SpaceX up for an even brighter future. The company has become NASA’s preferred launch partner and now handles about two-thirds of the agency’s launches under government contracts worth billions. SpaceX also offers a “rideshare” option that will carry smaller payloads to orbit for as little as $1 million. The company also just raised over $500 million in fresh funding to keep developing its Crew Dragon capsule, Starship program, and Starlink satellite business. So it’s safe to say that SpaceX has a lot riding on this Demo-2 launch.

SpaceX, now valued at about $36 billion, rose to prominence after NASA fell from grace. The federal space agency has to rely on private companies to launch its astronauts into space because its own crewed spaceflight program ended when NASA ended the Space Shuttle program in 2011. At that time, NASA shifted its attention to Mars and Earth science and away from space shuttles and a return trip to the Moon. More recently, President Trump has shifted NASA’s attention yet again and pushed for funding for the Artemis lunar expedition missions, which some say won’t happen on time.

Suffice it to say, there’s been some shifting of priorities at NASA. In the years since the Space Shuttle program ended, American astronauts have had to hitch rides on Russian rockets to get to and from the ISS at a cost of $86 million each and an unquantifiable amount of national pride. (SpaceX, by contrast, is estimated to charge $55 million per astronaut for these round-trip flights.) This arrangement with Russia is not supposed to last forever.

That means space exploration is now a business, and many of its biggest innovations are coming from the private sector, which is partially subsidized by public money. And NASA is just fine with this, as the new partnerships shifts some of the cost of developing and constructing spacecraft onto private industry. Through these arrangements, Boeing has developed its Starliner capsule, which has no launch date yet, and SpaceX built the Crew Dragon capsule, which is set to be the star of this week’s crewed launch.

Success is by no means guaranteed. Boeing has been beset by problems, failures, and delays. Meanwhile, the first SpaceX Crew Dragon capsule blew up during an engine test in 2019.

We need to talk about Elon

No discussion of SpaceX would be complete with some hand-wringing over its controversial founder and CEO — Musk himself has made sure of that.

His biographer Ashlee Vance interviewed Musk for Bloomberg as the Demo-2 launch approached. Vance highlighted how Musk has recently made himself a lightning rod of criticism for suggesting that Covid-19 is fake and generally being awful on Twitter. Yet, the SpaceX founder is the man of the hour. Vance writes:

Even the most fervent Musk hater, of whom there are plenty in the US, has to feel some twinge of pride. At a moment when the American Empire can seem to be in decline, here’s a clear sign that great things remain possible and that humans have much left to achieve. “America is still the land of opportunity more than any other place, for sure,” Musk says, waxing patriotic. “There is definitely no other country where I could have done this—immigrant or not.” That it’s a multibillionaire, Covid-19-truthing, entrepreneurial huckster/hero delivering this message is pretty much perfect for America in 2020.

Vance added that Musk’s “business tactics and behavior can oscillate between infuriating and appalling.”

Indeed. Musk’s Twitter account has 34.5 million followers, and the material that issues forth tends to alternate between self-promotional businessman and angsty teenager. Musk’s tweets alone have gotten him sued by a cave diver and the Securities and Exchange Commission. (He won the first case and settled the second, with an agreement that personally cost him $20 million and his chairmanship of Tesla’s board.)

Just this year — which, keep in mind, is even half over — Musk has vowed in a tweet to sell his possessions, after which he tweeted, “My gf … is mad at me.” Musk also said the price of his own company’s stock was “too high,” named his new child X Æ A-Xii, repeatedly downplayed the coronavirus pandemic, and forced his Tesla employees to work through it — even defying government orders to reopen a factory early. SpaceX, which is considered critical infrastructure, never stopped. When Musk did seem to take the pandemic seriously, it was to offer his companies’ assistance in manufacturing ventilators. But that help never really came — although in fairness, neither did the feared nationwide ventilator shortage that prompted those tweets. Musk’s recent tweet urging followers to “take the red pill,” a term that has well-known far-right and men’s rights activist connections, got a response from Ivanka Trump, who simply said, “Taken!”

Yet while his bizarre, attention-seeking behavior may be a turnoff for many, his businesses make enough money and are cool enough to investors that SpaceX and Tesla seem to be succeeding in spite of Musk’s increasingly controversial public image. The US government, however, is not a business, and it has not taken well to Musk’s antics. Along with the SEC’s $20 million fine, NASA investigated and scolded him after he smoked pot while appearing on a podcast in 2018.

Still, SpaceX is undeniably an accomplishment, and a successful launch will be an essential step toward Musk’s plans for the moon or Mars or wherever he ultimately decides to go. It’s hard to know how a failure, even one that results in the loss of human life, could affect the company’s grandest ambitions. If it causes NASA to rethink its public-private partnership, it could be a more significant detour. But at this point, it’s hard to imagine the future of space travel without SpaceX and without Musk.

Correction, May 26: An earlier version of this story incorrectly stated the amount of a recent round of investment in SpaceX. The company raised just over $500 million. This article has also been updated to reflect a launch delay.

Theresa May is on a doomed mission to renegotiate Brexit
Hillary Clinton’s defense of Bill Clinton is why women don’t come forward
Congress is on track to avoid a government shutdown — as long as Trump doesn’t get involved
What’s really going on with the economy
Tote bags, water bottles, mailing labels: Why non-profits give away so much crap
Poll: Bernie Sanders is beating every other candidate in Nevada