“We are living in a touristic prison”: Palestinians on life in the holy city of Bethlehem 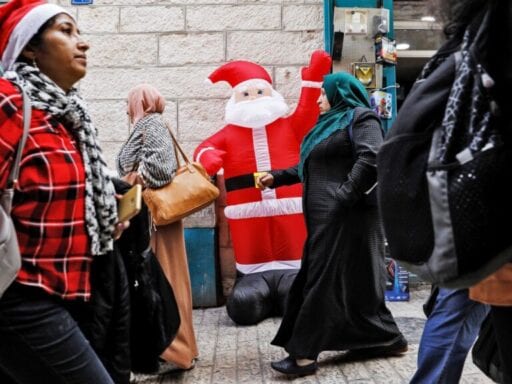 Share
Loading...
People walk past an inflatable Santa Claus along a street market in the West Bank city of Bethlehem on December 7, 2019. | Emmanuel Dunand/AFP via Getty Images

Millions visit Bethlehem every Christmas. But Palestinians who live there are struggling to survive.

BETHLEHEM, West Bank — It’s daytime in Bethlehem, about two weeks before Christmas, and two laborers are adding stones to a narrow, cobbled road believed to have been taken by Mary and Joseph from Nazareth to the place of Jesus’s birth.

The pilgrimage route known as Star Street is being renovated in hopes it will return to its former glory: a bustling thoroughfare of historical importance. For now, though, it is often deserted, its storefronts almost always shut.

Downtown Bethlehem, the commercial heart of the city, is mostly bypassed in favor of the more well-known ancient site: the church built on top of the grotto where Jesus was born. After the Oslo I Accord — what was meant as a pathway for Palestinian self-determination — was signed by the Israeli government and the Palestine Liberation Organization in 1993, tourism in Bethlehem boomed.

Seven years later, it took a nosedive when the Israeli military invaded many of the West Bank’s major cities that were under Palestinian jurisdiction. As a political stalemate and expanding Israeli settlements led to the bloody Second Intifada, or uprising, the devastation and Israeli curfews kept tourists away; hotels closed and restaurants went out of business.

It took several years for Bethlehem to claw its way back as a tourist destination. Star Street has already been renovated three times in almost two decades. Today it houses an iconography school, where Palestinians learn to make religious art to replace the cheap, factory-made replicas produced mostly in China for sale at the city’s souvenir shops.

It is also home to Dar Al-Sabbagh, a research center for Bethlehem expats that’s considered one of the most important historical buildings in the city.

Bethlehemites are also excited this year about the return of a wooden relic believed to have been part of Jesus’s manger. As it makes its way from the Vatican to Jerusalem and then on to Bethlehem, this small piece of history is expected to attract more pilgrims this Christmas season.

“We are expecting 1.4 million tourists,” said Anton Salman, the mayor of Bethlehem. This number includes only pilgrimage groups and not individuals, though, so numbers are expected to be much higher.

This is a 20 percent increase over last year, Salman noted: “The number of tourists coming into the city is increasing. Since 2017, the number has been going up.”

But experts say Israel’s mushrooming settlements in the West Bank and its separation wall, which divides Bethlehem from Jerusalem — its historical sister city — have restricted access to the city and devastated the local economy.

“We are living in a touristic prison. Yes, we get lots of tourism, but for the Palestinian people, it’s pretty much a prison,” said Suhail Khalilieh, head of the Settlements Monitoring Department at the Applied Research Institute — Jerusalem (ARIJ), a nonprofit based in Bethlehem.

Also this year, Israeli authorities have banned Christians in the Gaza Strip from entering Bethlehem and other cities in the West Bank during Christmas. Israel says the decision is due to “security” reasons, whereas some Israeli rights groups, such as Gisha, believe it’s designed to consolidate the divide between Gaza and the West Bank.

Last year, 700 of the roughly 1,000 Palestinian Christians were given permits to travel to Bethlehem, Nazareth, and Jerusalem to celebrate Christmas.

“We are being suffocated”

Today, there are 23 settlements, which take up 8.1 square miles (21 square kilometers) of the Bethlehem area. Some 165,000 Israeli settlers — comprising about one-third of the total settler population in the West Bank, according to Khalilieh — live here on hilltops, in houses marked by their red tile roofs.

Ninety-two percent of Bethlehem’s 210,000 Palestinians are confined to 13 percent of its total land, he explained. “There is no room to expand or build on,” he said. “Development of the city is extremely limited. Bethlehem is a devastated governorate.

“Bethlehem is known to have one of the highest rates of unemployment within the West Bank. The price of land and [the] cost of living has skyrocketed beyond imagination, mostly because of tourism,” Khalilieh continued. “[The prices may be] good enough for tourists, but for the people of Bethlehem, it’s really expensive considering the income. We are being suffocated in terms of where and how we live, so the thought of immigrating is not far off from the minds of many people.”

The Church of the Nativity, which has been under renovation since 2013, is the main attraction for pilgrims and visitors who come to Bethlehem. But this has not always reaped the economic rewards coveted by Palestinians. If anything, some argue, it’s adding to an existing environmental crisis.

“Bethlehem is suffocating,” said George Rishmawi, a tourism expert and executive director of Abraham’s Path, a nonprofit that develops community-based tourism. “It’s full of buses and cars, [and] we don’t have enough space. Most of our land was stolen for the [sake of] Israeli settlements.

“We have no place to breathe, no open areas for locals,” he added. “Tourists will come normally to visit the Church of the Nativity, use the toilets, some of them have lunch, some of them visit the Shepherds’ Field and leave.”

According to Christian tradition, Shepherds’ Field marks the spot where angels first announced the birth of Christ. Today it is a chapel based in Beit Sahour, a Palestinian Christian village southeast of Bethlehem.

Fadi Kattan, a Palestinian chef who owns and operates the boutique Hosh Al-Syrian Guesthouse and its cafe, believes tourism should extend beyond the Christmas season and that changes should be made to entice visitors to stay in Bethlehem during the rest of the year.

To renovate the church, the Palestinian Authority has spent more than $17 million so far, half of which it fundraised itself, while the rest came from individual donors, states, and religious organizations.

Built in the 4th century, the Church of the Nativity has undergone several makeovers due to both natural and man-made disasters. Almost 85 percent of the restoration has been completed, including repairs to water-damaged windows and a leaky roof.

“Bethlehemites do not collect any kind of fees for entering the church,” Rishmawi said. “We have infrastructure that’s being depreciated, yet we have to raise funds and pay for it and develop the infrastructure, while most of the shops and the people are not feeling the [effects of] tourism, because it is just [focused mainly on] visiting the church.”

“Do they care about what’s happening around them?”

Having the church be the main — if not only — attraction for most visitors during the festive season leaves Bethlehemites feeling “invisible during Christmas,” said Rev. Munther Isaac, the Lutheran pastor of Bethlehem and a prominent Palestinian theologian.

“I say so because their main interest is to visit a site, stones, but not [so] much the people themselves, the community,” Isaac said. “And I always say if Bethlehem were not on the Palestinian side, those millions of Christian pilgrims wouldn’t even care to know about Palestinians and what it means to live under Israeli occupation.”

The challenge, Isaac said, is to look at the Palestinian-Israeli conflict through the eyes of Jesus. Isaac believes that many Western Christians engage in false spirituality when they don’t ask what Jesus would do when dealing with such a conflict.

“As they cross the checkpoint, and they travel near the separation wall and by two refugee camps, I always wonder: Do they care about what’s happening around them?” Isaac asked. “Or is Bethlehem, to them, this romantic view of an old church that they visit and tick off their to-do list of religious duties? Is this what it means to follow in Jesus’s footsteps?”

Dalia Hatuqa is a journalist based in the West Bank and the US. She tweets @DaliaHatuqa and her work can be found at www.daliahatuqa.com.

The #FallingStars challenge highlights extreme wealth — and extreme inequality
Dr. Deborah Birx says, “Social distancing will be with us through the summer”
Jay Inslee, the climate candidate of 2020, is ending his campaign
Podcasts like The Thing About Pam are why I’ll never get tired of true crime
“Probably the worst briefing I’ve seen”: Inside the disastrous congressional Iran meeting
Vox is starting a book club. Come read with us!