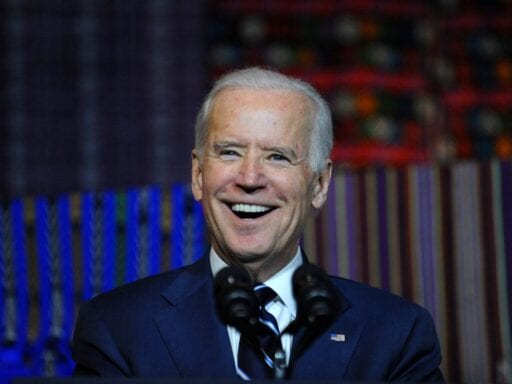 How Biden could use the powers of the presidency to protect vulnerable communities and hold fossil fuel companies accountable.

Election Day is closing in, and former Vice President Joe Biden has made climate change one of his signature issues. His “clean energy revolution and environmental justice” plan would be the most ambitious and aggressive environmental agenda in US history if it were enacted.

Voters, especially young voters, also crave action on climate change. Polling shows that a majority of Americans of all ages want all levels of government to address global warming, but it’s one of the highest priorities for young Democrats.

The single best way to increase enthusiasm for Biden among young voters is to talk about his climate plan. 41% of less motivated voters said thy were much more motivated to vote after hearing about Biden’s bold climate stance. https://t.co/qNwIz0BHSx

Our questions stemmed from two key themes. The first is that we wanted to know what candidates would do specifically with the powers of the presidency rather than their beliefs. The second theme is that political power, not science, is the main limiting factor to action on climate change. We wanted candidates to go beyond professing their belief in the science and talk about how they will shift the balance of power in government toward their positions. (You can see their responses here).

A lot has changed since then. Biden is now the nominee, with California Sen. Kamala Harris as his running mate, and he has put out a more aggressive climate plan than what he had in 2019. The Covid-19 pandemic, meanwhile, continues to rage. Millions are out of work. More than 215,000 Americans are dead.

With that in mind, we asked the Biden campaign to revisit their responses to see if any priorities had shifted. (We posed a similar set of questions to the Trump campaign and will post the responses if and when we receive them). The answers, provided by Biden’s campaign press secretary, Jamal Brown, are below.

1. A president has only 100 days or so in which to pass a few key priorities. Where does climate change fall on your list of priorities when you step into office?

Because of President Trump’s failure to get control of the virus, we are in the midst of a serious economic recession. Trump has no plan to combat the virus, and no plan to pull our economy out of a recession.

Biden has a plan for both, and his economic recovery agenda he will pursue immediately upon taking office is a plan to not only build back to the way things were before the virus or before President Trump — but back better. “Better” means an economy designed to tackle the climate crisis.

When Trump thinks “climate” he thinks “hoax.” Biden thinks “jobs.” Biden’s climate plan is a jobs plan, at its core. Last year, at the beginning of his campaign, he rolled out an ambitious plan to take immediate action on day one of his Administration to rejoin the Paris Climate Agreement, lead the world in upping the ante of our climate ambitions, and put the U.S. an irreversible path to achieve net-zero emissions, economy-wide, by no later than 2050.

This past summer, he released a second installment of his climate plan, scaled up to meet the moment — an economic crisis. His plan will invest $2 trillion in clean energy and infrastructure over four years, creating millions of high-paying jobs with a choice to join a union. He’ll put Americans back to work to accomplish important tasks such as manufacturing electric vehicles, plugging abandoned oil and gas wells, and retrofitting our offices and homes to be more energy efficient. And he has set near-term sectoral targets, such as a carbon-free power sector by 2035.

Biden recognizes that we are in a climate emergency and he will meet the crisis with the urgency that the science demands by beginning to take action on day one of his Administration.

2. If Democrats win a narrow majority in the Senate, will you advocate for reforming or scrapping the filibuster?

Vice President Biden is hopeful that he can get legislation passed without resorting to that.

3. If Republicans control one or both houses of Congress and legislation stalls, what executive actions are you prepared to take to reduce carbon emissions?

On day one, President Biden will rejoin the Paris Climate Agreement and rally the rest of the world to meet the threat of climate change. He will lead a major diplomatic effort to get every major country to ramp up the ambition of their domestic climate targets, including convening a climate world summit to directly engage the leaders of the major carbon-emitting nations of the world to persuade them to join the United States in making more ambitious national pledges, above and beyond the commitments they have already made.

He will make sure those commitments are transparent and enforceable, and stop countries from cheating by using America’s economic leverage and power of example. He will fully integrate climate change into our foreign policy and national security strategies, as well as our approach to trade.

Furthermore, President Biden will sign a series of new executive orders with unprecedented reach that put us on the right track to address our climate crisis. These executive actions will focus on:

Vice President Biden will commit our country to fulfilling our obligation to all workers impacted by a shift in energy sources, like coal miners and their communities, including establishing a Task Force, as the Obama-Biden Administration did for Detroit when the auto industry was in turmoil.

Throughout every aspect of Biden’s plan to rebuild a resilient infrastructure and sustainable, clean energy economy, he will prioritize addressing historic, environmental injustice. Biden has a comprehensive environmental justice plan, which includes:

5. Right now there’s a nationwide push to hold fossil fuel companies accountable via lawsuits, shareholder resolutions, and divestment for their contributions to climate change and campaigns to mislead the public. Do you support these efforts? What do you see at the government’s role in holding polluters accountable?

The Biden Administration will take action against fossil fuel companies and other polluters who put profit over people and knowingly harm our environment and poison our communities’ air, land, and water, or conceal information regarding potential environmental and health risks.

As president, Biden will hold polluters accountable. Plain and simple. Under the Trump Administration, the U.S. Environmental Protection Agency (EPA) has referred the fewest number of criminal anti-pollution cases to the Justice Department in 30 years. Allowing corporations to continue to pollute – affecting the health and safety of both their workers and surrounding communities – without consequences perpetuates an egregious abuse of power. Biden will direct his EPA and Justice Department to pursue these cases to the fullest extent permitted by law and, when needed, seek additional legislation as needed to hold corporate executives personally accountable – including jail time where merited.

Biden will overhaul and update existing programs at the White House, the Department of Justice, and the Environmental Protection Agency in order to comprehensively address the most pressing, intersectional environmental justice issues and hold polluters accountable. For example, Biden will ensure that frontline and fenceline communities are at the table when enforcement, remediation, and investment decisions affecting those communities are made. Biden will ensure working groups on these issues report directly into the White House, so that communities facing the dual threat of environmental and economic burdens have access to the highest levels of the Biden Administration. And, Biden will establish a new Environmental and Climate Justice Division within the Justice Department, as proposed by Governor Inslee, to complement the work of the Environment and Natural Resources Division and hold polluters accountable.

6. The Pentagon has called climate change a “threat multiplier” in international conflict. At the same time, climate change stands to have the worst impacts on countries that contributed least to the problem. How should the US brace for global climate chaos? And what will you do to help other countries prepare for the impending disruption?

To address our defense and intelligence leaders’ warnings about the threats climate change poses to global stability and security, Biden will elevate climate change as a national security priority. Specifically, he will:

In addition, Biden will recommit the United States to the Green Climate Fund, fulfilling America’s pledge and enhancing our security by helping developing countries better manage the adverse effects of climate change, including conflict, migration, and state fragility. The U.S. will also work with international financial institutions to pursue shared debt relief for countries provided that they use those funds for climate-friendly development.

As president, Biden will rejoin the Paris Agreement. But simply rejoining is not enough. Biden will use every tool of American foreign policy to push the rest of the world to raise their ambitions alongside the United States. Part of this effort includes providing “green debt relief” for developing countries that make climate commitments.