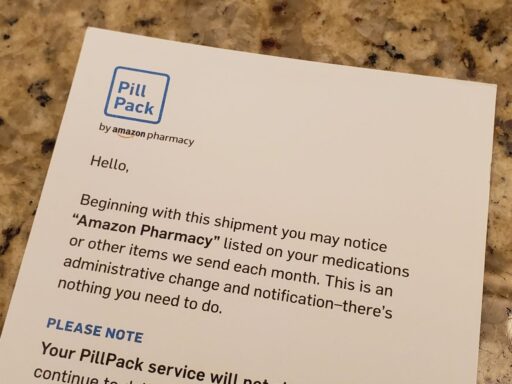 Amazon’s new pharmacy business isn’t about the present. It’s about the future.

Amazon and American health care look, at first glance, like a mismatch. Yet the 21st century’s most ruthlessly efficient retailer has been trying for several years now to gain a bigger foothold in the bloated, borderline nonsensical health system of the world’s richest nation.

Which is why whenever Amazon makes a new health care maneuver, like the company’s recent announcement that prescription drugs would be sold through its flagship website at a discount for Prime members, the same question inevitably gets asked: Is Amazon coming to disrupt health care?

The short answer is no. At least, not yet.

Amazon bought PillPack, an online pharmacy, two years ago with an eye toward making a move like this: integrating the pharmacy business into its monolithic online store. PillPack gave Amazon the licenses to operate a pharmacy in almost every state, and the vision was always that you would eventually be able to fill a prescription for your blood pressure drug at the same time you were shopping for … everything else you buy on Amazon.

On its face, the recent news is an incremental step. Amazon Pharmacy is now just one more pharmacy to choose from, alongside Walgreens, CVS, and the like. Some people might get drugs more cheaply thanks to discounts being offered through Prime, but most will still use their health insurance plan and pay the same amount they would anywhere else. This is bad news for some specialty businesses, namely GoodRx, but the major pharmacy chains aren’t going anywhere anytime soon.

But Amazon surely isn’t finished expanding its health care portfolio. The latest pharmacy play is a chance for the company to get a better idea of what it takes to run a pharmacy business — to handle the logistical and administrative challenges — before it takes another step. The rest of the sector has been put on notice.

“They’re buying information. They’re making an investment to gain some information to figure out whether it’s worth it to make a much bigger investment,” Craig Garthwaite, who studies health care economics at the Kellogg School of Management at Northwestern University, told me. “This might not work, but they would never figure out if they can be a major player without being a minor player first.”

What Amazon Pharmacy can offer patients

Amazon Prime members, of which there are nearly 120 million in the United States, will enjoy two major benefits through Amazon Pharmacy. They can get medications delivered for free within two days and they qualify for discounts, up to 80 percent off generics and up to 40 percent off brand-name drugs, that might allow them to buy drugs on their own for a cheaper price than they could get using their insurance benefits.

(As for people who don’t have Prime or can’t afford it, it would seem they are cut out of these deals, another example of the fundamental inequities in America’s health care system that Amazon is not going to fix.)

The company has already built a slick interface that allows people to enter the last four digits of their Social Security number and pull up their insurance benefits. When people go to check out with their prescription, the website will show insured customers two prices: one with their insurance benefits, one with the Prime discount. For certain generic drugs especially, the Amazon price is going to be cheaper even for people with insurance. For the uninsured, they will now get easy access to discounts on their prescriptions.

“Amazon is offering simplicity, which is something they’re really good at,” Garthwaite said.

From a business strategy standpoint, this is a pincer movement that allows Amazon to gobble up more of the retail pharmacy business, where patients typically use their insurance, and more of the discount drug cottage industry that has grown to offer uninsured patients with rebates similar to, if usually smaller than, what insured patients enjoy. PillPack also catered primarily to patients with chronic conditions, who need the same medications every month. Amazon Pharmacy could expand the company’s reach to capture the one-off prescriptions people receive when they get the flu or have an injury.

The company already has the Prime infrastructure, with warehouses and a team of (overworked) workers who could fill orders and deliver them within a few days, on which to build this new venture. There are some obvious pitfalls that Amazon will want to prepare for. For example, some insured patients who opt not to use their benefits and instead take the company’s discount might be annoyed to find out that their purchase didn’t count toward their health insurance plan’s deductible. Who gets the blame in that scenario, the insurer or Amazon? They’ll also want to expand their counseling services so people can get questions about their prescriptions answered, though that is the kind of service that PillPack is already experienced at providing.

So at bottom, the current version of Amazon Pharmacy looks like a natural extension of the 2018 PillPack purchase. The bigger question then is what comes next.

“For now, I think they are just going to be replacing existing market share,” says Stacie Dusetzina, a health policy professor at the Vanderbilt University School of Medicine. “But they may decide at some point to be more disruptive once they have gotten settled into this new space.”

The Amazon news is most immediately a threat to GoodRx, which offers discounts on prescription drugs for uninsured and underinsured patients. Amazon is now proposing the same service, with all the brand loyalty and retail convenience that comes with its name. In a note to investors, UBS Research analysts called Amazon “a significant competitive threat” to GoodRx. The company’s stock price plummeted 20 percent after Amazon announced its news.

The major pharmacies, like CVS and Walgreens, have been anticipating a move like this for some time. Both already offer discount cards and free delivery, essentially the same service that Amazon is now offering. But they do face a risk if Amazon becomes particularly adept at the online pharmacy business.

Garthwaite identified two ways in which the company could build on the current service and potentially absorb an even bigger share of prescription drug sales. First, it would need to figure out cold storage. The Prime warehouse infrastructure probably works for the more conventional medications, but biologics that treat rheumatoid arthritis or cancer and need to be handled sensitively require special storage and transportation that Amazon would need to build out.

The other, related question is whether they could reduce delivery times from two days to same-day or even two hours. Imagine going to a doctor, who writes a prescription for you and sends it to Amazon, and the medication is delivered to your door on the same day, all without your having to step inside a brick-and-mortar pharmacy.

“That actually sounds like a compelling product at that point,” Garthwaite said.

And Amazon could use that superlative convenience paired with its newly established relationships with health insurance plans to start competing more directly with the major pharmacy chains. It might vie to be labeled a “preferred” pharmacy by health plans, which reduces the out-of-pocket obligation for patients.

Over the long haul, Amazon might even become experienced enough with pharmacy benefits to start administering them itself, creating a new competitor for pharmacy benefits managers (PBMs). The recent mergers of health plans and PBMs may limit the company’s ability to make those inroads. Health insurers won’t be eager to cooperate with a new competitor for one of their other lines of business. But that doesn’t mean Amazon won’t give it a try.

Can Amazon unlock lower drug prices? That looks less likely. Existing companies like GoodRx already offer the same kind of discounts on drugs Amazon is now proposing. The major PBMs already command huge market shares — Caremark, Express Scripts, and Optum alone make up 75 percent of the entire market — that give them significant leverage in their negotiations with drug manufacturers. Amazon can take some of their business, but they’re already operating at such a scale that the online retailer won’t have much of an advantage if it tries to bargain for lower prices.

At least not yet. This should be treated as a trial period for Amazon. Company CEO Jeff Bezos is known to be unafraid of failure. A different venture into employee medical clinics struggled to gain traction, but that didn’t stop Bezos from making the investment to test out the concept.

It may be that Amazon will have the same problems scaling up its pharmacy business. But the company also clearly sees an opportunity for growth. The potential for future disruption is baked into this business proposition.

“While this move may not really be the disruption to drug prices that people were hoping for, Dusetzina told me, “it may give Amazon the experience they need in this space to make a bigger move in the future.”

Is social media ready for a Covid-19 vaccine?
College football players are taking a stand against racism — and taking a big risk
Florida Legislature approves bill requiring former felons to pay fines and fees before voting
Syria’s Idlib was already a humanitarian nightmare. Now the coronavirus has arrived.
Mitt Romney just did something that literally no senator has ever done before
Wholesale coffee is cheaper than it’s been in years. That’s not good news.