What Nancy Pelosi said about the 25th Amendment 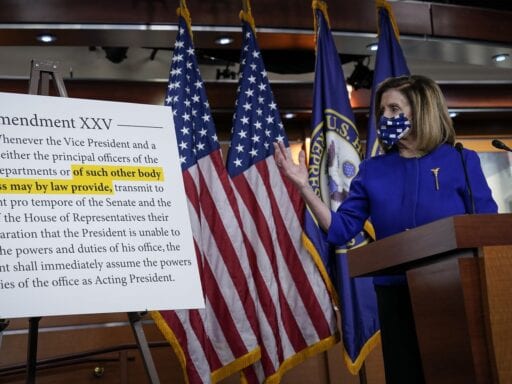 Share
Loading...
Speaker of the House Nancy Pelosi during a news conference at the Capitol on October 9 in Washington, DC. | Drew Angerer/Getty Images

It’s not about removing Trump, it’s about introducing a reform bill.

The infamous 25th Amendment to the Constitution lays out how a sitting president can be temporarily stripped of his powers, if the vice president and a majority of Cabinet secretaries declare that he is unfit to serve.

Rather, Pelosi was promoting a bill sponsored by Rep. Jamie Raskin (D-MD), which, if signed into law, would create a new bipartisan commission that could, if the vice president agrees, declare the president unable to serve.

Pelosi described that this as a general good government reform proposal for the future, saying it is “not about President Trump,” whom she said will “face the judgment of the voters.” Indeed, there’s no chance this bill will be passed or signed into law this year. For now, it’s just an idea.

But in the context of the Trump era, holding a press conference on the 25th Amendment is akin to waving a red flag in front of a bull. And indeed, Trump soon responded with a tweet baselessly accusing Pelosi of planning to invoke the amendment to replace an eventual President Biden with his vice president, Kamala Harris.

Crazy Nancy Pelosi is looking at the 25th Amendment in order to replace Joe Biden with Kamala Harris. The Dems want that to happen fast because Sleepy Joe is out of it!!!

What would this bill actually do?

As often discussed in the Trump era, Section 4 of the 25th Amendment lets the vice president and a majority of Cabinet secretaries temporarily deprive the president of his powers, if they declare his inability to serve in office. The amendment does not define what “inability” entails, but it has often been discussed in terms of physical incapacitation, dementia, or even just erraticism. (The president can also fight to reclaim his powers if he disagrees that he’s unfit, it would take a two-thirds vote of both the House and Senate to keep him sidelined.)

However, the 25th Amendment says it doesn’t necessarily have to be the Cabinet that makes the call on presidential inability. It says that the vice president can also work with some “other body as Congress may by law provide” to deem the president unfit, and take over his powers.

But Congress never ended up creating this other body. So that’s what this bill from Rep. Raskin would do: it would create the “Commission on Presidential Capacity to Discharge the Powers and Duties of the Office.” (The bill isn’t new — Raskin first introduced it in 2017.)

Per Raskin’s bill, this commission would have 17 members. Nine of those members would have to be physicians, and at least four of those nine must specialize in psychiatry. The other eight members will be former high-ranking executive branch officials (former presidents, vice presidents, top Cabinet secretaries, or surgeons general).

This commission could then be empowered by Congress to conduct “an examination of the President to determine whether the President is incapacitated, either mentally or physically.” Then they’d have to tell Congress their findings.

The point of all this would be to take away this decision-making power on presidential inability from the president’s own appointees, who may be hesitant to defy him (and who he could fire), to a group of mostly medical professionals.

Still, most of those medical professionals would be appointed by congressional leaders of both parties (currently Mitch McConnell, Kevin McCarthy, Chuck Schumer, and Pelosi), so politics clearly would not be removed from the process. That means the very high bar to deprive a sitting president of his powers would remain quite high.

Perhaps the most challenging thing about all this, though, would be convincing a president of the United States to sign a bill into law that would create a new way he could be stripped of his powers.

Amazon warehouse workers doing “back-breaking” work walked off the job in protest
9 key questions about the longest government shutdown in history, answered
What Trump actually proposed in his coronavirus speech
The Asian giant hornet, a.k.a. the Murder Hornet, has arrived. Bees beware.
The 9 films that explain the legendary Studio Ghibli
The soothing, slightly sinister world of productivity hacks