What should the media learn from the coronavirus? 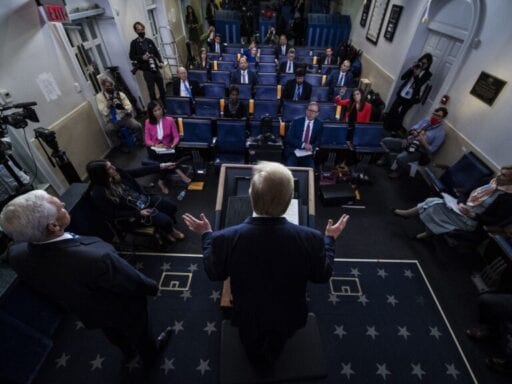 Share
Loading...
President Trump speaks to members of the press during a press briefing at the White House on April 23. | Jabin Botsford/The Washington Post via Getty Images

Covid-19 exposed weaknesses in our media ecosystem. Can we fix them?

The coronavirus is “a nightmare scenario” for the media, wrote New York Times columnist Charlie Warzel. “It is stealthy, resilient and confounding to experts. It moves far faster than scientists can study it. What seems to be true today may be wrong tomorrow.”

Warzel is right. We’ve talked a lot in recent years about fake news. But combating information we know is false is a straightforward problem compared to covering a story where we don’t know what’s true, and where yesterday’s expert consensus becomes tomorrow’s derided falsehoods. In these cases, the normal tools of journalism begin to fail, and trust is easily lost.

There’s been a lot of criticism of what the media missed in the run-up to the coronavirus. Some of it has been unfair. But some of it demands attention, reflection, and change. There’s also a lot the media got right, and those successes need to be celebrated and learned from.

The questions raised in this interview are hard, and go to one of the trickiest issues in journalism: How does a profession that prides itself on reporting truth cover the world probabilistically? What do we do when we simply can’t know what’s true, and when some of what we think we know might become untrue?

Warzel covers the way technology, information, and media interact with and change each other. He’s one of the people I turn to first when I’m churning over these questions, which is … not infrequent. And so this episode of The Ezra Klein Show is a bit different than the normal fare: This is less an interview-with-an-expert, and more the kind of conversation that I — and others in the media — am having a lot of right now, and that I think we at least need to try and have in public.

You wrote that “The coronavirus emerges in the middle of a golden age of media manipulation. It’s resilient and stealthy and confounding to experts. And it moves faster than scientists can study it: what seems true today can be wrong tomorrow.”

It’s the worst possible situation for the media because the way you might normally do your reporting begins to break down, and what you somehow need to be doing is probabilistic reporting. But we don’t really have good models for that, so it creates a trust crisis.

I think face masks are a good example because that’s somewhere where all kinds of media organizations were talking to the CDC and the US surgeon general and everybody said: Face masks are not that effective, they’re more trouble than they’re worth, we should save them for nurses and others. Then, midway through this crisis, they reversed that guidance to some degree. That’s a real problem for the media because we were trying to be accurate and what we were being told wasn’t accurate. Nobody wants to second guess the CDC on face masks, but that stuff does real damage in the long run to people’s faith in us.

I think it’s true. A month ago, there’s the sort of unthinkable moment where the American health care system looks like it might possibly explode. And there was this real backlash against the media — and it was founded.

I did a lot of soul searching in that moment as someone who covers technology, media, politics. I’ve never been a science reporter or someone who’s covered infectious diseases. But should I have seen this coming in some way? Should I have been paying more attention to this global issue, or to global issues in general? Should I always be paying 10 percent more attention to what is happening in China? And, if so, how would that have informed the way that I would have thought about this crisis in January and early February — before it really became real to me as the biggest story in the world?

I think you’re right to focus on [face masks] because I don’t know what the answer is there. The type of reporting that anyone would do is to reach out to the government experts — to speak to the people who are in these positions of authority. If that system breaks down, I don’t know what we’re really supposed to do.

There’s no good answer here, but I think this idea of probabilistic reporting is somewhere along the lines. The thing I’ve noticed from a media perspective is that there is sort of a realm of certainty around the framing of a story where you’re saying, “You don’t need to worry.” It’s framed and couched in an overly assured tone.

I think that when it comes to reporting on science or infectious disease — or probably even politics — the media needs to move a little bit toward embracing uncertainty. People want answers but they also want to be leveled with right now. I think generally that’s how a sophisticated news consumption audience wants to be treated. Part of what we need to do is embrace some of that uncertainty and say, “here’s what we know; here’s what we don’t know.” We need to be a lot more vigilant about foregrounding what we don’t know.

In February, Dr. Anthony Fauci was still saying the risk from the coronavirus to the US was “minuscule.” We assumed that the people we were talking to really knew what was going on. Maybe we should have been more skeptical and said we just don’t know that much here. On the other hand, it’s really hard as a reporter to question what the five epidemiologists you just called are telling you.

This is something I am really struggling with. I keep thinking about how do I cover things more probabilistically without somehow substituting expertise for things I don’t actually have expertise in.

I think that this is going to be a moment in a lot of our lives that will change the way in which we think about risk and resiliency, especially in industries like ours where there is either a future casting element or an assessment of risk and severity that we’re constantly making. I think some of the problem here has to do with the fact that we haven’t had a pandemic like this in a lifetime of people. There aren’t a lot of people alive who went through 1918 to loudly ring an alarm bell.

If you’re somebody who is constantly assessing risk and resiliency and thinking about the interconnected ways in which our systems work globally and are reliant on each other, then you might have rung the alarm bell a little bit earlier. I actually think that’s a reason why a lot of people in Silicon Valley are some of the people who took it really seriously early. You had some venture capitalists in the valley who banned handshakes [in early February].

Those types of people are always assessing the probability of 1 or 2 percent and the type of returns you can get from that. That’s the tech investor strategy. But that’s not necessarily the way you would want the press to act.

I think a lot about the idea that we’re also competing within information ecosystems. You’re competing for attention and eyeballs, and it’s very difficult to turn probabilistic, incredibly hedged, nuanced ideas into something that can get in front of people. It’s always been in our nature, in the press to get important work out to people. And sometimes [to do that] you have to frame things in a way that couches some of the nuance.

That’s a long way of saying, I think that we should constantly be reckoning, as people of the press, with what we’re doing right and wrong.

What’s really going on with the economy
Trump’s Covid-19 diagnosis may have come earlier than we thought
Walmart has again delayed the launch of its Amazon Prime competitor Walmart+
Christians are calling for better family leave policies. That wasn’t always the case.
2020 ties for the hottest year on record
How the coronavirus is changing science