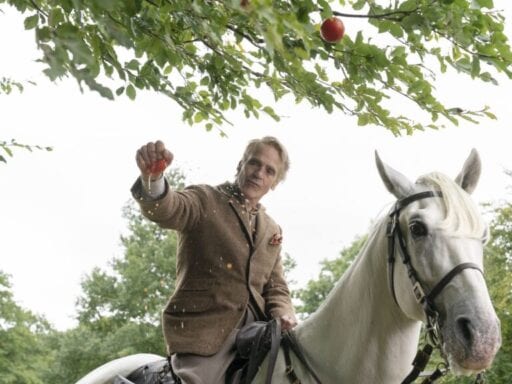 Jeremy Irons’s character doesn’t even feel like he’s on the same show.

Two episodes into HBO’s Watchmen, the show is already brimming with mysteries. Among the unexplained: What kind of powers, if any, does Will (Louis Gossett, Jr.) possess to hang, as he says he did, Police Chief Judd Crawford (Don Johnson? Is Will even telling the truth? What other skeletons are in Judd’s closet beyond that Ku Klux Klan outfit? And what else will Angela (Regina King) find out about him and her family? Is Angela ever going to get a day off?

And there’s an even more stupefying one: Is Jeremy Irons even on the same show?

While the chaos in Tulsa swirls and as squids fall from the sky, Irons’s character is living in a lavish mansion roleplaying an affluent period piece — an Upstairs Downstairs fantasy with a … staff of robot clones? Sure, okay. And while those who read Alan Moore and Dave Gibbons’s comic (or anyone who’s skimmed the series’ IMDB page) might know who Irons is, his identity creates a whole new set of questions.

Jeremy Irons is Adrian Veidt who is also known as Ozymandias

Jeremy Irons’s character’s identity hasn’t officially been confirmed on the show yet. But based on showrunner Damon Lindelof saying Irons is “probably who you think he is” in an interview, a few comic book clues laced into the show, and IMDB, Irons plays Adrian Veidt, a.k.a. Ozymandias, the central villain from the Watchmen graphic novel.

Veidt is considered the smartest man on Earth who, at first, appears to be the rich, fancy, level-headed foil to the vigilante Rorschach’s impulsiveness in the book. He’s a retired hero who observes the entire world from afar. At the end of the comic series, though, it’s revealed that Veidt has concocted and enacted a seemingly nefarious plan: Veidt fakes an alien cephalopod attack that kills millions of real people, and in doing so, unites the United States, Russia, and other superpowers together (against said alien) and avoids an inevitable WWIII nuclear showdown.

Regardless of how one feels about what Veidt did, his giant alien squid attack and the coverup happened in HBO’s Watchmen universe. Now we get to see what life is like in that world, some 33 years after the attack. In 2019, squids fall from the sky periodically. Rorschach has a devout following. But despite these imperfections, the world was saved from nuclear destruction.

What the show has yet to establish is what Veidt is up to these days, or where he is.

According to a newspaper seen in episode 1, authorities believe Veidt to be dead after a years-long, worldwide search:

But the keenest of viewers — and comic book readers — know that this isn’t completely true. Veidt faked an alien attack that changed the entire world. The smartest man on Earth going into hiding and fooling people isn’t that difficult to image. And while the show doesn’t name him, Irons has been shown riding a pale horse, a symbol of Death and one of the four horsemen of the apocalypse, and coddled with a staff of robots — a feat that would require a genius.

It’s unclear where any of this takes place; could it be on a different planet entirely? The credits refer to Irons’s character as “Lord of the Country Manor,” but where that manor exists is anyone’s guess.

Wherever he may be, Veidt lives in slightly sadistic seclusion. In the second episode, we see Veidt stage a play recreating the creation of Watchmen’s omnipotent blue superhero Doctor Manhattan’s creation starring his army of robot clones. These plays get very involved; we see pyrotechnics engulf one of the actors in real flames. And as his clones drag away one of their charred comrades, he takes said clone’s pocket watch and says, “it’s only just begun”:

Veidt’s attachment to the clock is pertinent because in the Watchmen comic books, Veidt was perturbed by a nuclear doomsday he wanted to avoid. In the graphic novel, Veidt has been keeping up with the nuclear tensions arising between the US and Russia. This was tracked by a Doomsday Clock, like the Doomsday Clock we have in real life, and scientists had inched the clock dangerously forward in Watchmen’s alternate timeline.

In the show and the comic, clocks aren’t primarily seen as measures of the time of day, but instead a countdown to something disastrous happening. Like the Rorschach zealots are seen dismantling watches in the first episode, Veidt seems to be planning something, as he restarts the stopped watch. The clock could be ticking away minutes until his big plan — or Veidt’s pocket watch could also be a direct connection to the Doomsday Clock which, like it did in the comics, may indicate a nuclear-type event and his return from wherever his country manor may be to “save” the world one last time.

While the comic book has shown what Veidt is capable of, we don’t know where his storyline is heading in the TV show, or how he will cross paths with the other characters, like Angela and Will.

Veidt floating around Tulsa in his silky robes seems too silly to be what happens next. Conversely, it’s also hard to think that Angela is going to find herself at Veidt’s obscure country manor. But given the strangeness of the series so far, it’s not entirely out of the realm of possibility to see either of those things happen in an upcoming episode, or maybe something even stranger.

Want to fix obesity and climate change at the same time? Make Big Food companies pay.
The Supreme Court’s new decision could sink Trump’s anti-LGBTQ agenda
Star Wars: The Rise of Skywalker’s D23 trailer teases an “evil” Rey
The best $149 I ever spent: A FitBit to monitor my heart rate
Trump’s Supreme Court shortlist is an attempt to remind his base why they love him
The Georgia legislature finally passes a hate crime bill in the wake of Ahmaud Arbery’s death