What to expect from Joe Biden’s first address to Congress 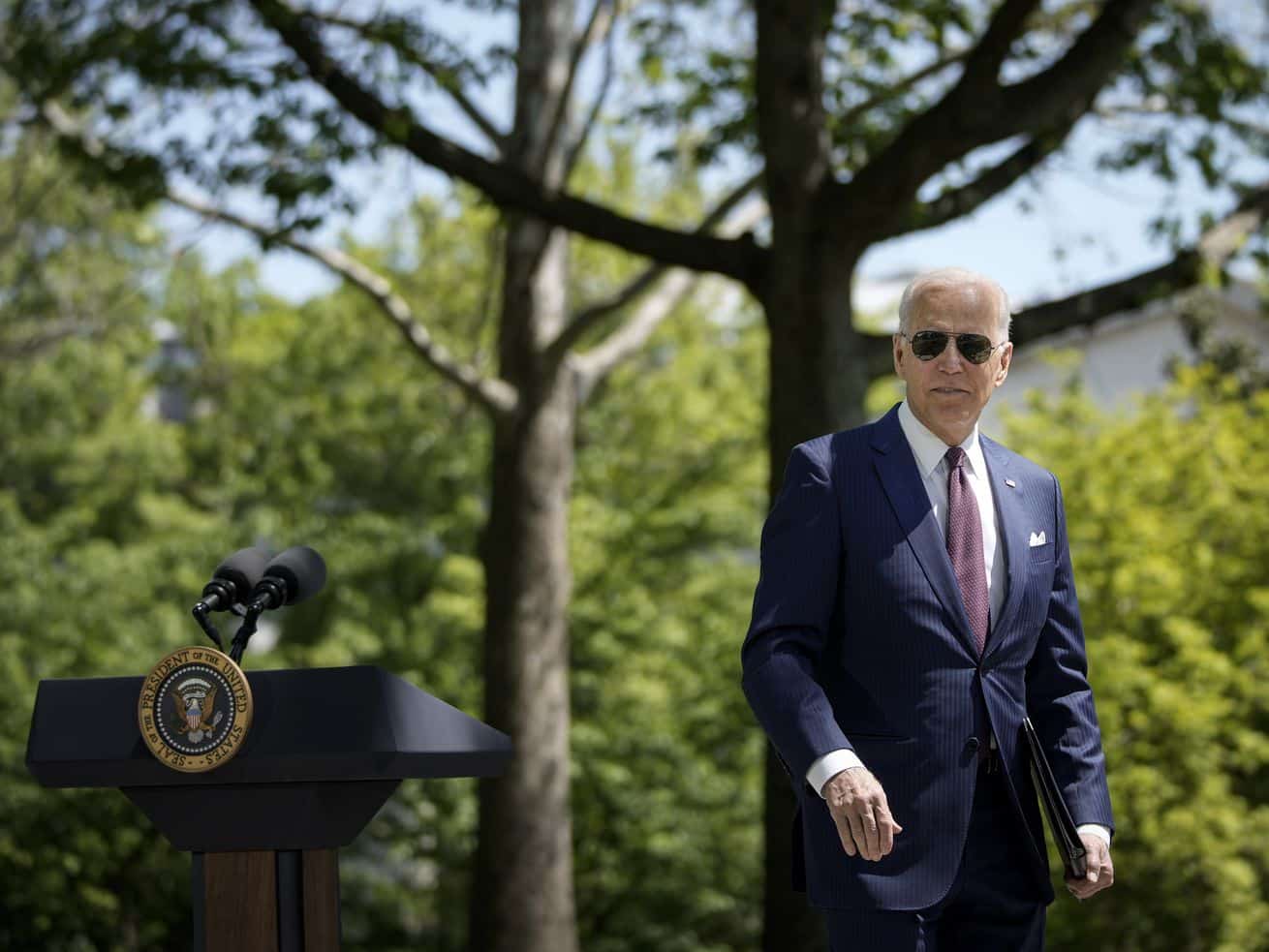 Is it a state of the union? And all your other questions about Biden’s first address to Congress, answered.

President Joe Biden is giving his first address to Congress on Wednesday, and will lay out his agenda for pandemic recovery and economic development. In his speech, he’s expected to tout the administration’s successful effort to vaccinate 200 million people in its first 100 days, comment on legislation to curtail police violence, and push his massive infrastructure proposal.

Biden’s address will take place Wednesday, April 28, at 9 pm ET. It will be broadcast live on major networks such as PBS, CNN, Fox, and NBC, on C-SPAN, and streamed on the White House’s official YouTube page.

Biden’s speech is not a State of the Union address, however. Those happen every January. Biden, like every other president in the first year of their first term, will give what is known as an address before a joint session of Congress.

This year’s joint address will be different from those that came before — in part due to the continuing coronavirus pandemic. Only 200 members of Congress are set to attend due to Covid-19 restrictions recommended by the Capitol physician, far fewer than in normal years, when nearly every lawmaker and their guests typically take part. The secretaries of state and defense are the only Cabinet members expected, while only Chief Justice John Roberts will be in attendance from the Supreme Court.

Also of note will be the people behind Biden as he gives his address. For the first time, two women, Vice President Kamala Harris and House Speaker Nancy Pelosi, will be seated behind the president.

The address also comes later than most: Every president since Ronald Reagan has delivered his first address in February, including President Donald Trump, who used his February 28, 2017, speech to declare an end to the “trivial fights” that dominated the first month of his administration — and that ended up continuing for the next four years.

Biden said he wanted to spend his first weeks in office focusing first on addressing the coronavirus pandemic. But the delay gives him an opportunity to tout his first legislative victory: the American Rescue Plan, a $1.9 trillion Covid-19 relief package that has provided millions of Americans with stimulus checks, extended the federal government’s employment insurance program, and provided funding for vaccine distribution, among other things.

And a later speech gives Biden a chance to highlight progress on vaccination: 200 million shots have now made it into American arms. Nearly 54 percent of adults have received at least one dose, according to the Centers for Disease Control and Prevention.

But Biden’s speech won’t be just about what’s happened; it is also intended to build support for legislation still to come. And that means a focus on infrastructure.

The White House envisioned the American Rescue Plan as the first step in the federal response to the pandemic — it was seen as a tool to stop short-term economic damage and pave the way for a return to normal life. The actual recovery was meant to be taken care of by future plans, the first of which Biden unveiled in early April: the American Jobs Plan.

The plan could stimulate the economy in the long term, while fixing crumbling infrastructure and aiding the transition to green energy. If passed, it would dedicate $621 billion in infrastructure to repairing the country’s dilapidated roads, bridges, ports, and railway systems, while allocating another $300 billion to bolster manufacturing, among other things. It’s a plan Biden wants to pay for by raising the corporate tax rate to 28 percent and closing loopholes on offshore banks and international corporations.

Biden can be expected to make a pitch for this plan Wednesday night, and will also detail the proposal’s counterpart, the American Families Plan. It’s a $1.8 trillion proposal focused on “human infrastructure” that would provide child care funding, universal prekindergarten programming, tuition-free community colleges, and paid family leave, along with extending the child tax credit and the earned income tax credit.

“The core of that [speech] will be him laying out the specifics of the American Families Plan, his commitment to child care, to education, and to delivering on those priorities,” White House press secretary Jen Psaki told reporters last Thursday.

Both plans would represent a fundamental shift in the federal government’s role in providing for Americans. As Vox’s Ella Nilsen writes:

The Biden administration is attempting to reclassify social welfare programs like medical leave and universal education access as a type of human infrastructure. He’ll hit on both of those points in his speech Wednesday as he attempts to drum up support from moderate Republicans in Congress and from Democrats who are wary of proposals veering from the political center.

The administration is seeking to win bipartisan support for its jobs plan, given that Democrats need 10 Republican senators to overcome the filibuster in the Senate. Republicans and corporate figures have acknowledged the country needs to rebuild its highways and bridges, but have thus far signaled a wariness to spend too much to do so — as well as an outright rejection of Biden’s plan for paying for the initiative.

Democrats could attempt to pass the plan using budget reconciliation — under this process, only a simple majority is needed to pass legislation in the Senate, although there are limits on what can be in that legislation, as Vox’s Dylan Scott has explained. Democrats currently have 51 votes in the Senate (counting the tiebreaking vote of Vice President Harris) and could conceivably pass the infrastructure plans through reconciliation.

But to do so, they’ll need to keep all Democrats — including Sen. Joe Manchin (D-WV), who has called for bipartisanship in crafting the infrastructure package — in line. And Biden’s speech will, in part, be a case for why they should follow his lead.

Biden will also address the problems with policing

Speaking just over a week after a Minneapolis jury’s decision to convict former police officer Derek Chauvin of murder for the killing of George Floyd, Biden will call on Congress to pass the George Floyd Justice in Policing Act, Psaki said.

“I think he’s promising to the Floyd family that he will use the power of his presidency — the bully pulpit, as he intends to do during his joint address next week; the role of senior leaders in his government — to help push the George Floyd Justice in Policing Act forward,” Psaki said at a press briefing last Wednesday.

The Justice in Policing Act calls for a number of reforms at the federal level, including demilitarizing police departments, increasing data collection on police misconduct, and expanding access to body cameras. And Biden is expected to highlight how the bill might help reduce police killings, as well as how it could help address the problems of racial bias in policing.

Sen. Tim Scott will give the GOP response to Biden’s joint address

Sen. Tim Scott (R-SC) — a GOP rising star who has taken the lead for his party in congressional talks on policing policy — will give the Republican rebuttal to Biden’s speech.

Scott is notably the only Black Republican in the Senate. Of the 124 lawmakers in Congress who identify as nonwhite, just 17 percent are Republicans. Diversity, while rising gradually in GOP circles in recent years, is still low. Scott’s speech could be aimed at changing that — and on building on the gains Trump made with some Americans of color.

“I’m looking forward to having the chance to speak to the American people about what’s in my heart and about the conservative values that have led to some of the greatest accomplishments the world has ever known,” Scott said in a video posted to his Twitter account Monday.

Humbled at the opportunity to speak to the nation on Wednesday. Can’t wait to share what’s on my heart—hope y’all tune in! pic.twitter.com/jE6tKMwdZZ

Speeches made by Republican responders have yielded mixed results in recent years. Nikki Haley’s 2016 response helped catapult her into the national spotlight, and she is now reportedly contemplating a 2024 presidential run. Bobby Jindal, Bob McDonnell, and Paul Ryan, who spoke in 2009, 2010, and 2011, respectively, now all have a greatly reduced public presence.

The Working Families Party will give a progressive response

Rep. Jamaal Bowman (D-NY) will deliver the progressive response on behalf of the Working Families Party (WFP), marking the fourth time the group has responded to a presidential address before Congress. Bowman, a first-term representative who was backed by the WFP throughout a contentious primary campaign against incumbent Eliot Engel last year, is regarded as a rising star on the progressive side of the party.

“As we approach the first hundred days of the president’s term, we should celebrate our victories, take stock of where we’ve fallen short, and be crystal clear about what it will take to truly build back better and deliver the recovery and the democracy our people deserve,” Bowman said last week in a press release.

Last year, the Working Families Party response was given by Rep. Ayanna Pressley (D-MA), whose national profile has only risen since.

Above all, Biden wants to unify the country

Biden has made unity a key part of his message, and it’s likely he’ll touch on this theme Wednesday evening. He’ll need to explain why Democrats should stay united on infrastructure to keep the reconciliation path open, while also making a pitch to Republicans to negotiate with Democrats in good faith. And he’ll attempt to solidify public support. He’s pitching the proposals as a litmus test for the American government.

The stakes are certainly high. For Biden, the plans represent the way forward out of the pandemic, but also pose an important question, as he said when pitching the jobs plan earlier this month: “Can democracies still deliver for their people?”

Belarus’s historic antigovernment protests, in photos
The number of US alcohol deaths per year has doubled since 1999
I asked Wall Street insiders whether they’d prefer Elizabeth Warren or Donald Trump. It turned out t...
New Hampshire primary turnout was good for Democrats — sort of
Is this the end of clubs?
How GOP lawyers intimidated a blue Texas county into shutting down 9 polling sites