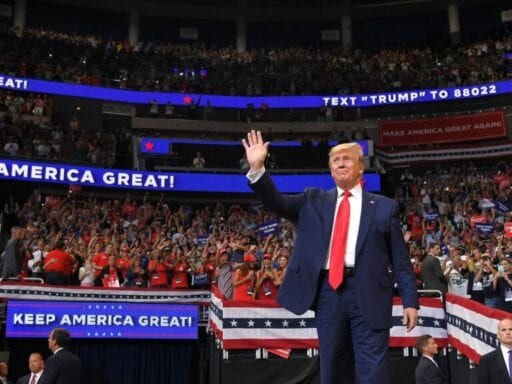 Trump keeps polling really badly against all the major 2020 Dems.

The polls du jour show President Donald Trump trailing basically every Democrat in the 2020 general election, both nationally and in individual states — even in Texas.

Democratic voters might rejoice at these signs that Trump will be a one-term president. But they should temper themselves: Hillary Clinton was regularly leading Trump by 10 points or more a year ahead of the 2016 election. Polls taken 14 months before an election are simply not predictive. Too much can happen and sentiments can change when the race becomes one specific Democrat running against one specific Republican.

We also shouldn’t read too much, pollsters and political handicappers say, into the variations in how different Democrats fare against Trump in these polls. Joe Biden and Bernie Sanders might enjoy the biggest margins simply because they have the highest name ID among the 2020 Democratic field. It doesn’t necessarily mean that they would wallop Trump whereas Kamala Harris or Pete Buttigieg would struggle. It might just mean fewer Americans have heard of them.

But we can still learn something from these surveys. Their message is pretty simple: Trump looks weak. The president is lagging in the low 40s in head-to-head polls, consistent with his stubbornly low approval ratings. A lot of Americans seem to be fully committed to or are actively considering voting for somebody else. That’s not where the incumbent, after three years in office, should be if they want a second term.

The latest hypothetical 2020 general election polling you should know about

Even in Texas, long an electoral pipe dream for Democrats that is suddenly being taken more seriously as a possible target for the challengers, a new survey found Trump polling behind not only Joe Biden (who typically fares the best against Trump in hypothetical head-to-heads) but Elizabeth Warren, Bernie Sanders, Cory Booker, and Kamala Harris too.

These were the latest numbers in Texas from Latino Decisions, North Star Opinion Research, and the University of Houston:

It would be tempting to look at this poll and try to parse some meaning from the marginal differences between the Democratic candidates. Are Biden and Sanders the most electable or just the best known? Does Harris have the shakiest case for her one-on-one viability against Trump?

But the real story is in the second half of the column, with Donald Trump stuck between 41 and 44 percent in Texas. Head-to-head polling from the Washington Post and ABC News, fresh off the presses, tells a similar story at the national level among registered voters:

Once again, the president doesn’t breach even 45 percent against any of his potential Democratic opponents.

What these polls actually tell us: Trump is in a weak position

The Democratic primary has been fixated on the idea of electability, but several different pollsters and handicappers — Democratic and unaffiliated — told me not to over-read the differences between how the various candidates fare against Trump in these polls.

“The results tell us a lot more about Trump’s vulnerability than it shows the strength of the different Democratic candidates relative to each other,” one pollster working with a 2020 campaign said.

Trump has time to turn it around, but he doesn’t appear in nearly as good a position for reelection as the last two presidents who won second terms.

There are other warning bells if you look a little deeper than the head-to-head numbers.

“Trump sometimes runs a little bit behind his approval rating in some of these polls, which is an ominous sign for a president who was so reliant on voters who disliked both him and Clinton backing him,” Kyle Kondik, managing editor at Sabato’s Crystal Ball at the University of Virginia’s Center for Politics, told me.

Presidential approval ratings have always been strongly linked to voting behavior. Here is the RealClearPolitics average of the president’s approval rating, from the start of his presidency to now:

Trump has been consistently unpopular throughout his first two years. So far, at his best, he was 7 points more unpopular than popular. A recent uptick has swiftly eroded. And as Vox’s Ezra Klein wrote last summer, this has been in defiance of a relatively solid economy:

“Trump’s poll numbers are probably 20 points below where a president would typically be with consumer sentiment as high as it is now,” says John Sides, a political scientist at George Washington University who has done work benchmarking presidential approval to economic indicators.

So here, then, is what we can say: Judged on the economy, which is the traditional driver of presidential approval, Donald Trump’s poll numbers should be much, much higher than they are now. Far from finding a winning strategy, he seems to have found a losing one despite holding a winning hand.

And this is the key for Trump and why his standing with voters seems so perilous. Trump beat Clinton among voters who dislike both candidates by a striking margin: 50 percent of those voters backed Trump versus 39 percent going for Clinton, according to CNN. But he can’t depend on the same luck this time around, when the election is more likely to serve as a referendum on his first term.

If Trump isn’t winning people over then his path to victory becomes incredibly narrow. His low approval rating paired with this poor showing in hypothetical head-to-head match-ups suggest he isn’t. That much we can say here in August 2019.