What you need to know about Jair Bolsonaro, Brazil’s new far-right president 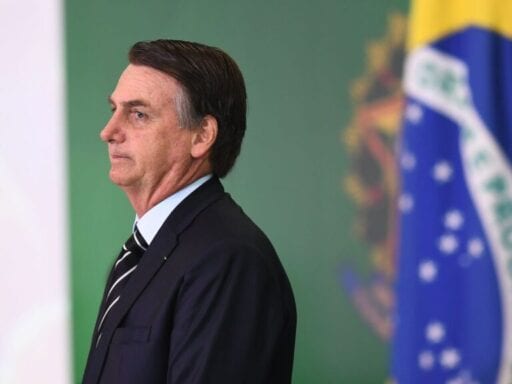 Bolsonaro took office on January 1, repeating many of his hardline campaign promises.

Jair Bolsonaro campaigned for president on the slogan, “Brazil before everything, and God above all.”

Think of it as Brazil’s version of “America First.”

That campaign carried Bolsonaro to a decisive victory in the country’s presidential runoff in October. On January 1, as he was sworn into office, Bolsonaro declared Brazil liberated from socialism and promised “to unite the people, rescue the family, respect religions and our Judeo-Christian tradition, combat genre ideology, conserving our values.”

His inauguration day remarks tapped into what appealed to Brazilians about Bolsonaro during his presidential campaign. The far-right firebrand promised to “break the system” and depart from the status quo after a tumultuous few years. Brazil suffered from a deep recession starting in 2016. That economic crisis was accompanied by political turmoil, as a massive corruption scandal unspooled in the country at the highest levels of government and business, leaving few high-profile leaders unscathed.

Against this backdrop, a rise in violent crime left some voters yearning for order and security, which Bolsonaro — an ex-military officer — promised to deliver.

But his embrace of “law and order” carries alarming undertones, as he has expressed a fondness for the country’s past military dictatorship. His anti-democratic views are just one element of his disturbing rhetoric, though; the new president also freely spews misogynistic, anti-LGBTQ, and racist statements.

Bolsonaro has also often been compared to US President Donald Trump; both have a reputation for incendiary rhetoric, have tried to build campaigns on promises to end corruption and crack down on crime and chaos, and know their way around social media.

The Trump administration, for its part, has unapologetically embraced Bolsonaro as a check on leftist regimes in the region — namely Venezuela, Cuba, and Nicaragua, which National Security Adviser John Bolton dubbed “the troika of tyranny.”

Trump tweeted praise of Bolsonaro’s inauguration speech on Tuesday and informed the new Brazilian president that “the U.S.A. is with you!” Secretary of State Mike Pompeo traveled to Brazil for Bolsonaro’s swearing in, expressing confidence in the US-Brazil relations that “will benefit the world by a set of shared values.” And former United Nations Ambassador Nikki Haley called Bolsonaro — who has lauded Brazil’s military dictatorship — a US-friendly leader who “will join the fight against dictatorships in Venezuela and Cuba.”

This emphatic embrace of Bolsonaro comes as the new Brazilian leader is beginning to make good on his campaign promises. He has already issued orders that undermine protections for LGBTQ populations and indigenous groups, undercutting the defenses of some of his supporters, who dismissed the seriousness of his rhetoric.

Bolsonaro’s rise has roiled Brazilian politics — and the ascendence of the polarizing figure could set the Latin American country on a new, unpredictable path.

Here’s what you need to know about the new Brazilian president sometimes called the “Trump of the Tropics.”

1) He cast himself as the political outsider

Bolsonaro isn’t exactly a political outsider, though he’s certainly tried to paint himself as one. The 63-year-old is a former military officer and has served seven terms in Brazil’s federal congress. As Mike LaSusa wrote for Vox, Bolsonaro has enjoyed strong ties to the military and rose to prominence as “a no-holds-barred conservative.”

He’s been a member of many different parties over the years, but he most recently joined the Social Liberal Party (PSL), and from there mounted his presidential campaign. His affiliation with the formerly marginal party has turned it into a political force that’s made tremendous gains in Brazil’s legislature.

Bolsonaro relied heavily on social media to promote his candidacy and get his message out. He often seemed to be taking a page out of Trump’s playbook, whether it was bragging about his votes, blaming the leftist Workers’ Party for Brazil’s failures, or promising to “rescue Brazil.”

He also faced intense opposition and protests, particularly from women. Opponents have used the slogan #EleNão, or “Not Him.” In September, a man who claimed he was on a “mission from God” stabbed the candidate in the abdomen at a campaign rally.

Bolsonaro was seriously injured — but it helped raise his profile and gave him something of a “martyr” status. It may have also cowed his opponents, who didn’t want to be seen blasting a man who’d just survived a knife attack.

“I just want to send a message to the thugs who tried to ruin the life of a family man, a guy who is the hope for millions of Brazilians,” said Flávio Bolsonaro, Jair’s Bolsonaro’s son, after the attack. “You just elected him president.”

2) He has a history of embracing offensive views

Oh, where to begin. Bolsonaro has a deep record of making offensive comments about women and the LGBTQ community and racist statements about Brazil’s black or mixed-race community.

He’s held these views for years, but his newfound popularity and presidential platform have amplified their reach. Guilherme Casarões, a comparative politics professor at the Getulio Vargas Foundation, a university in São Paulo, told the Washington Post that “five years ago, he was just another congressman with anti-gay views. Now Bolsonaro, like Trump, has become a larger-than-life figure.”

Bolsonaro has even faced charges for his discriminatory comments. Here’s a sampling of some of the things he’s said:

Some of his supporters seemed to welcome his rhetoric, while others wanted him to tone it down for fear that he would alienate voters. Bolsonaro’s opponents have protested against his offensive language and have even compared him to Hitler.

In response, Bolsonaro tried to play off some of his commentary as jokes taken out of context, and during the runoff campaign, he attempted to use more inclusive language by saying he’s trying to make Brazil safer and better for all its people — though his past stances seem to contradict that pretty clearly.

And on the second day of his presidency, Bolsonaro has already indicated that he is serious about scaling back protections for some groups. According to the Associated Press, Bolsonaro signed an executive order that will put the Ministry of Agriculture in charge of indigenous reserves, protected lands for indigenous populations. Advocates see this as a threat to the status of indigenous groups and to the environment, as agribusinesses aligned with Bolsonaro want to open the land for development.

Bolsonaro is also scrapping Brazil’s human rights minister and creating a minister of “family values.” He’s named an ultraconservative pastor to take over the job, which will now oversee women, families, and indigenous populations, and human rights — though it will not include LGBTQ populations.

3) He has a troublesome affinity for Brazil’s military dictatorship

Some of Bolsonaro’s most controversial statements involve his laudatory remarks about Brazil’s brutal military dictatorship. The country was under military rule from the 1960s until the mid-1980s. In 2015, Bolsonaro went so far as to call it “glorious.”

In 2016, he voted to impeach then-President Dilma Rousseff — indicating that he did so in honor of the deceased chief of secret police in São Paulo, who oversaw the torture of hundreds under military rule. It was a disturbing act, as Rousseff herself had been imprisoned and tortured by the dictatorship.

For his presidential run, Bolsonaro chose as his running mate a retired military general who has also made disconcerting statements about military power, including that the return of military rule in Brazil could be justified under some circumstances.

Bolsonaro did not go that far in his presidential campaign — and he vowed that his government would be “constitutional and democratic” in his victory speech.

But his nostalgia for the days of military rule has alarmed many Brazilians, and according to the Washington Post, Bolsonaro has appointed seven former military officers to cabinet posts, the most since the dictatorship. There are others, however, who sympathize with his position in the wake of increased crime and insecurity in the country.

One of the main reasons so many Brazilian voters supported Bolsonaro is his promise to fix the country’s ills — high rates of violent crime, a faltering economy, and endemic corruption.

A huge and sprawling corruption scandal has engulfed Brazilian politics in recent years, and that sense of dysfunction has made the population dissatisfied and disillusioned with its leaders.

Michel Temer, the former president, is affiliated with a center-right party, and was abysmally unpopular. He took over after Rousseff, of the Workers’ Party, was impeached and removed from office in 2016 because of her connections to the corruption scandal. Rousseff was not implicated directly, but her party was in power, and she faced other pressures, such as the deepening recession.

Rousseff’s predecessor, Luiz Inácio “Lula” da Silva, served as president from 2003 to 2011 and remains extremely popular in Brazil, as his tenure was associated with economic growth and greater equality. Lula is so popular, in fact, that he was the frontrunner in the 2018 presidential race and was on his way to becoming president again — except he was barred from running because he’s serving a 12-year prison sentence after also being caught up in the corruption scandal. (Lula and his supporters have called his conviction dubious.)

With Lula out, Fernando Haddad, a former mayor of São Paulo, stepped in. Haddad tried to tie himself tightly to Lula’s legacy, and he made improving the economy central to his campaign. But he failed to drum up enough popular support to beat Bolsonaro, who successfully capitalized on Brazilians’ discontent with their government and its perceived inability to address the country’s economic and political ills.

But now Bolsonaro, as president, will have to deliver on his promises about the economy, corruption, and crime. The new leader plans to embrace more free market policies than his predecessors and on his inauguration day asked Brazil’s Congress to empower the police. Bolsonaro will reveal in the weeks and months ahead how he plans to execute his agenda. But whether he can do so — and at what cost — will define his presidency.

BuzzFeed journalists just walked off the job in 4 cities. Here’s why.
A new virus may be the cause of China’s mysterious pneumonia outbreak
Joe Biden was the most popular candidate among black voters in the Nevada caucuses
Why Bill de Blasio is so hated, explained
Targaryen family tree Game of Thrones' dynasty explained
How Spain’s coronavirus outbreak got so bad so fast — and how Spaniards are trying to cope