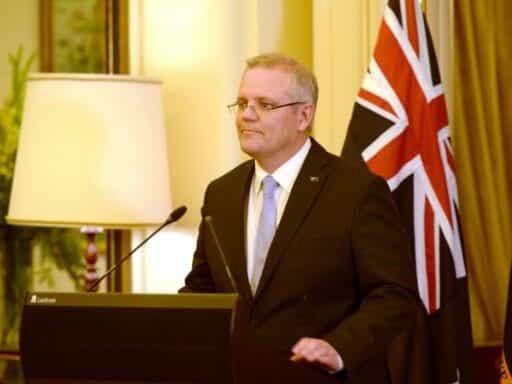 Scott Morrison is the new prime minister after Malcolm Turnbull was ousted in a leadership challenge.

Australia has a new prime minister, with Malcolm Turnbull having been ousted after a revolt within his center-right Liberal Party.

Scott Morrison, most recently the country’s treasurer and former implementer of Australia’s controversial “stop the boats” asylum seeker policy, was sworn in as prime minister on Friday. He didn’t start the leadership revolt against Turnbull, but Morrison emerged the winner of a three-way challenge in the week-long chaos.

Morrison will now be tasked with bringing some stability back to the Liberal Party, while he attempts to stave off the center-left Labor Party in the next federal elections, which must happen by May 2019.

Australia’s latest political tumult is probably causing some whiplash for the country’s voters. Morrison will be the fifth prime minister in five years. No prime minister has lasted a full three-year term in the past decade before being dumped — not by voters but by members of their own party.

Turnbull, who is now resigning from his spot in Parliament, himself staged a leadership coup to wrest control in 2015. It came back to haunt him this week as he faced his own challenge from the right wing of his party.

These intraparty squabbles are starting to feel like a bad routine, revealing a nearly decade-long dysfunction in the political system. It’s also giving politicians a pass; they’re shuffling around leaders of the country but largely leaving voters out of the process.

“They’ve reached a point where politicians have come to accept these before-election removals as a normal part of business, when they really weren’t,” Josh Kurlantzick, a fellow for Southeast Asia at the Council on Foreign Relations, told Vox. “So that just allows almost any modest disagreement to explode.”

A leadership “spill” that set off a week of chaos

Turnbull survived that initial challenge, but Dutton tried again later in the week, after a slew of ministers tried to resign. This time, it turned into a three-way challenge between Dutton; Julie Bishop, the foreign minister; and Morrison, the current treasurer, which is one of the most powerful posts in Turnbull’s cabinet.

Bishop was eliminated in the first round, and Morrison bested Dutton in a close vote, 45 to 40, to become the next prime minister.

Turnbull’s ouster seemed abrupt, but experts tell me it was a long time coming, as the leader had been on shaky terrain within his own party, which has an increasingly vocal conservative wing.

Turnbull, considered a moderate, tried to keep this rightward rebellion in check, granting concessions and trying to placate the hardliners. It didn’t work, and the conservatives were backed up by Australia’s version of (Rubert Murdoch-owned) right-wing media, which cheered Turnbull’s demise.

But Turnbull also has himself to blame. He left the way he came in, through an intraparty insurgency, and his enemies never forgave him for orchestrating the ouster of his predecessor Tony Abbott in 2015. This was a bit of good old-fashioned payback.

“That part wasn’t even necessarily about ideas or even notions of who’s conservative or not,” Kurlantzick said. “It’s just a revenge and disliking.”

The political drama wasn’t totally divorced from policy concerns, however. A debate over energy policy helped set off the political showdown. Energy is a big, messy issue, which Australia’s parties and politicians have been battling out for years. Australia is one of the world’s biggest energy exporters, but its energy infrastructure is shaky at home, and the country is struggling with how to adapt and implement policies to tackle climate change.

These so-called “energy wars” escalated in recent days when Turnbull introduced a modest energy bill opposed by hardline conservatives in his own party.

The sticking point of the bill among the opposition seemed to be limits on greenhouse gas emissions, which were basically in line with Australia’s commitments to the Paris climate agreement. (Dutton had raised the possibility of pulling out of the Paris agreement altogether.)

Turnbull backed down on the emissions portion, but the threat of members of his own party voting against the bill weakened him and escalated talk of a leadership challenge.

It’s against this backdrop that Turnbull failed to hold on — restive conservatives and an animus toward Turnbull set alit by this energy bill. There was no major political scandal or crisis; this was political chaos of the Liberal’s own making.

So who is Scott Morrison? And will this new prime minister have job security?

Scott Morrison, the new prime minister, “snuck through the middle” to take control by being basically palatable to both the pro- and anti-Turnbull wings of the Liberal Party, said Gregory Brown, an adjunct professor at Georgetown University’s Center for Australian, New Zealand & Pacific Studies.

Morrison is not as much of hardliner as Dutton, the man who set the revolt against Turnbull in motion.

Indeed, Morrison’s policies, big picture, probably won’t be all that different from Turnbull’s, though his reputation as a moderate somewhat belies reality — he’s socially conservative and is the architect of Australia’s controversial asylum seeker policy, which turned back boats trying to reach the country’s stores. He also oversaw policies that held migrants and asylum seekers in detention offshore.

But the new prime minister, above all, is a political operator. “Morrison has been a very aggressive player, even if his personality has been the happy guy telling family stories,” Brown said. “Behind the scenes, he’s proved to be a much more cagey political manipulator.”

Morrison proved that in this leadership fight. He didn’t instigate the rebellion against Turnbull but snuck in as a more moderate alternative to Dutton. He can claim that he took charge with his coalition in disarray, but he can also claim a little distance. He didn’t initiate Turnbull’s downfall, after all. He just happened to be there, and just so happened to be the beneficiary.

Dutton has agreed to back Morrison, in an attempt at unity among the Liberals. Morrison, as he was sworn in, said it was their job “to ensure that we not only bring our party back together, which has been bruised and battered this week, but that will enable us to ensure we bring the parliament back together.”

But again, this is Australia’s sixth prime minister in about a decade, the fourth ousted by his or her own party since 2010. The tumult didn’t start with the Liberal Party; the Labor Party went through a similar crisis. And voters punished them for this backbiting. If voters were sick of it then, they’re likely even more sick of the infighting now.

A sense is growing among Australians, as the New York Times pointed out, that the government cares more about these internal power plays than about actually running the government.

What’s more, the Turnbull ouster didn’t make a huge amount of political sense. It’s true that Turnbull and his party were losing popular support and risk losing control in the next federal elections — but Dutton, the guy who started this, really wasn’t popular among voters, and probably would have done more damage to the party’s prospects for control if he won.

Morrison got the gig, but it’s unclear if the shake-up will really help the party, or if voters will just be more exasperated by the turnover. The Labor Party is already using Turnbull ouster as a campaign issue, citing the “division and chaos.”

“This looks to me like a party trying to save itself during the election by trying to change the face at the top,” said Brown. It’s unclear if Morrison can provide that boost, though Brown added that the prime minister will at least have a less restive party to lead, as right-wing media and harder-line conservatives will likely fall in line for now.

The other, more uncomfortable question is what this means for Australian democracy. Federal elections will take place by May 2019, but there’s a sense that this prime minister turnover has become a normal part of business, as Kurlantzick told me, though it really didn’t begin in earnest until the past decade. (John Howard, of the Liberal Party, left office in 2007, and served for 11 years.) And having a new prime minister every couple of years can be disruptive to domestic and foreign policy, and the overall business of governing.

“People are constantly scheming within the parties within the parliamentary system, and prime ministers are getting removed but only rarely through an actual election,” Kurlantzick said.

The leadership “spills” are not a big deal to organize, Kurlantzick added. It is much more onerous to call a general election, or even a by-election, and much riskier, as voters can punish their leaders for creating political chaos.

Australian voters may punish the Liberal Party for this latest tumult. But there’s no guarantee, whoever is control, that Australia’s prime minister has job security.

No one has a damn clue how many jobs will be lost to automation
The life and death consequences of naming the coronavirus
The thankless task of social distancing
Oregon already votes by mail. Here’s what it can teach us in 2020.
SNL cold open: Matthew Broderick plays Mike Pompeo navigating a news-heavy impeachment inquiry
New Beyoncé, a Netflix teen rom-com, and other stuff we loved this week