Where things stand with the investigation into Capitol security failings 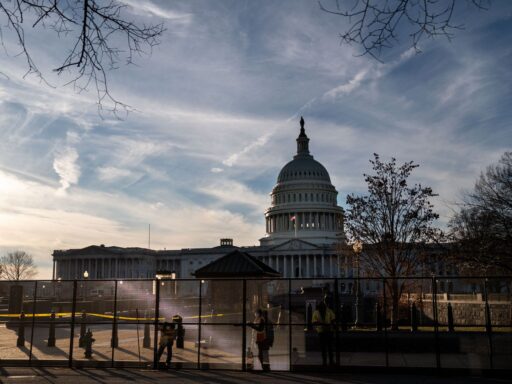 “The cops were very cool” — and that has Democrats worried.

A congressional investigation into the deadly storming of the US Capitol on Wednesday will encompass a probe into whether pro-Trump insurgents enjoyed “some level of support on the inside” as they mounted their attack, Democratic Rep. Tim Ryan of Ohio said Friday.

Ryan, a onetime presidential candidate who chairs the Legislative Branch subcommittee of the House Appropriations Committee, which includes the United States Capitol Police in its jurisdiction, told the Hill Friday that videos that appear to show officers cooperating with the mob “will be thoroughly examined.”

In the days since the infiltration, footage that Ryan called “disturbing” has emerged of Capitol Police officers standing by while pro-Trump insurrectionists file into the building. Other clips, including one where an officer appears to take a selfie with one of the rioters, have also elicited concern on Capitol Hill.

I’ve watched this clip 100 times and I still can’t believe it pic.twitter.com/7vYfmPJoxB

Additionally, the New York Times reported Thursday that a Capitol Police officer offered rioters directions to Senate Minority Leader Chuck Schumer’s office, while another rioter told CNN, “The cops were very cool. They were like, ‘Hey guys, have a good night.’ … You can see that some of them are on our side.”

Cops gave rioters directions to Schumer’s office but aimed a gun at a photographer and didn’t believe she was a journalist. Astonishing this is the level of security in the halls of a co-equal branch of government in the post-9/11 era. https://t.co/HRcll5w15j

Those reports emerge as a growing number of House Democrats express concern about how events unfolded Wednesday. On Friday, House Majority Whip Jim Clyburn told SiriusXM that rioters “went where you won’t find my name, but they found where I was supposed to be,” noting that they found his unmarked office, in which he says he does most of his work, while seeming to pass over his ceremonial one. “So something else was going on untoward here,” Clyburn said.

In a tweet thread Saturday morning, Ryan said, “for the entire U.S. Congress, including key figures in the line of succession, to be left so vulnerable to violent insurrectionists is a failure. Plain and simple. It’s unacceptable, and can never be allowed to happen again.”

Additionally, for the entire U.S. Congress, including key figures in the line of succession, to be left so vulnerable to violent insurrectionists is a failure. Plain and simple. It’s unacceptable, and can never be allowed to happen again.

Capitol Police have not responded to requests for comment, and whether there is support for some Democrats’ suspicions remains to be seen. However, efforts to find out whether there was any collusion with police may go beyond the probe announced Friday: First-term New York Rep. Jamaal Bowman tweeted Friday that he plans to introduce a bill to “establish a commission to investigate the attack, and ties between white supremacists and Capitol Police.”

“This is not entirely a story of incompetence on the part of law enforcement,” Bowman, a new member of the progressive “Squad,” tweeted. “And we have to ask: Did some of those charged with protecting us willingly lay down their posts? Was there a coordinated effort to take over the United States government with violence?”

I’m introducing the Congressional Oversight of Unjust Policing Act to uncover how the terrorist attack on our Capitol was able to breach the Capitol building.

This bill will establish a commission to investigate the attack, and ties between white supremacists and Capitol Police. pic.twitter.com/nOV8OBbfzc

Racial disparities in policing were on clear display

Beyond specific worries about potential internal USCP support for the rioters, some members of Congress have pointed out the jarring disparity in police use of force between Wednesday’s attack and Black Lives Matter protests in DC last summer.

“A lot of protesters, including in my hometown of San Antonio, they were shot with rubber bullets,” Democratic Rep. Joaquin Castro told the Texas Tribune. “People had tear gas used on them quickly. In this situation, I just don’t know how protesters reached the U.S. Capitol grounds, got into the Senate chamber.”

All told, Wednesday’s attack resulted in five deaths, including that of Capitol Police officer Brian Sicknick. According to CNN, a federal murder investigation will be opened into Sicknick’s death. Additionally, more than 50 police officers with either USCP or DC Metropolitan Police were injured in the attack, and 15 officers were hospitalized.

Despite that, a relatively small number of arrests were made the day of the attack. In total, just 61 people were arrested Wednesday, according to CNN, compared to more than 300 arrested in a single day last June at Black Lives Matter protests.

Also in June last year, police in riot gear unleashed tear gas on peaceful protesters to clear Washington, DC’s Lafayette Park and make room for a Trump photo op. Police seemed hesitant to use such force on Wednesday, resulting in a starkly different scene — including images of a Trump supporter who posed with his boots on Pelosi’s desk.

Here’s the moment where police fired teargas into a crowd of peaceful protesters in Lafayette Park, just minutes before Trump’s address in the Rose Garden. pic.twitter.com/KPjxMKdDyx

As Vox’s Anna North has explained, some have argued that the USCP’s response may have been influenced by backlash to the police brutality seen at many of 2020’s civil rights protests. “I’m pretty sure the Capitol Police were trying to do something a little softer, as we try to welcome protesters up there, but it got out of hand,” Terrance Gainer, who formerly led the Capitol Police, said on CNN Thursday.

In the past, however, Capitol Police have been quick to arrest protesters on the Hill. More than 300 people were arrested in a Senate office building during a peaceful 2018 protest against the confirmation of now-Supreme Court Justice Brett Kavanaugh.

Whatever the reason, Democrats appear set on ensuring accountability for this week’s failures by the Capitol Police and other congressional security.

“There was a strategic breakdown, for sure,” Ryan told reporters Wednesday after the siege. “You can bet your ass we’re going to get to the bottom of it.”

And there has already been a leadership shakeup. Capitol Police Chief Steven Sund submitted his resignation Thursday amid sustained criticism, and after House Speaker Nancy Pelosi called for him to do so.

The Senate sergeant-at-arms also resigned earlier this week after Schumer said he planned to fire him upon becoming majority leader on January 20. Pelosi, meanwhile, indicated at her weekly Thursday press conference that a resignation from the House sergeant-at-arms would be forthcoming.

“At least five people lost their lives because of what happened last week, and our national security was put at severe risk,” Ryan said in a Saturday tweet. “Not only must we get to the bottom of how and why this was allowed to happen, we have a duty to ensure it never EVER can happen again.”

Schumer faces the most important Supreme Court fight for Democrats in a generation
Schiff closed his arguments with an emotional appeal, but GOP senators seem unmoved
The Instacart strike, explained
Trump promised 200,000 Covid-19 vaccinations a day. That’s 5 to 9 years to vaccinate the US.
Trump strikes a bitterly vindictive tone during National Prayer Breakfast speech
Pro-Trump protesters rally for a coup: “We’re not going anywhere”