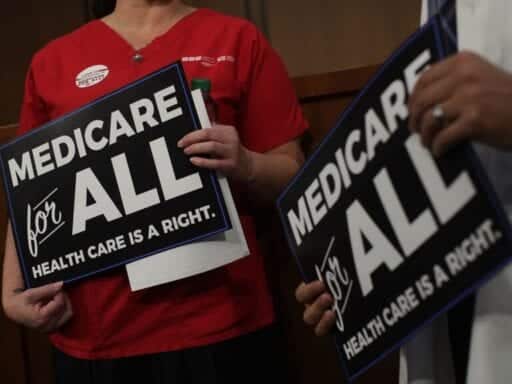 The Trump administration says this chart is a case against single-payer. Actually, it’s a case for it.

Earlier today, the White House released a paper titled “The Opportunity Costs of Socialism.” Weirdly, it contains a chart that actually makes a pretty decent argument for single-payer health care.

It all looks pretty clear cut: Places like Canada and Norway have long wait times in their single-payer systems, whereas we here in the United States have very short wait times.

Except, here’s the key thing it leaves out: America’s seniors are essentially in a single-payer system. The vast majority of Americans over 65 get coverage through Medicare, a government-run health care plan.

And Medicare operates in a way that is incredibly similar to the Canadian health care system. Both of them set prices for all sorts of medical procedures and let patients see a wide array of doctors.

It is true that the Canadian health care system does struggle with wait times. When you read through international research, you routinely see that it has some of the longest wait times in the developed world.

But it is also true that this isn’t a fundamental feature of a single-payer health care system. If you hop across the border and look at our own Medicare program, you see that it’s actually possible to build a single-payer system with short wait times. Most of it just depends on how much you pay doctors; higher pay is going to entice more professionals into the medical space.

And if you really want to compare wait times from the United States to other single-payer countries, you should probably look more broadly at our wait times — not just comparing seniors in our two countries, but comparing the entire population. And, luckily, the Commonwealth Fund publishes a report that does just that!

What is says — and I’ll dive into the numbers in a moment — is that American wait times look a lot worse when you add in all the people with private insurance or no insurance at all. Instead of having the shortest wait times, we’re more like middle of the pack.

This all means that the people in Medicare, our government-run program, are doing just fine on waits. But the people who have to shop for coverage in the private market? They’re waiting longer.

What exactly does middle of the pack mean? Here are a few data points from that report I mentioned:

All these figures and data points tell me that the Trump chart doesn’t say what the White House seems to think it says. It isn’t telling us that single-payer health care has long wait times. If anything, it says that it is possible to build a single-payer system with short wait times — and our Medicare program has already done it.

“This is not normal”: Cory Booker calls out Republicans rushing Amy Coney Barrett’s Supreme Court he...
The Supreme Court is about to hit an undemocratic milestone
The world’s scariest facial recognition software, explained
The Trump administration finally has one good idea to lower drug prices
How to reduce your food’s carbon footprint, in 2 charts
How to travel during the international coronavirus outbreak