“Who did you vote for”: Trump’s welcome-home question for the US pastor released by Turkey 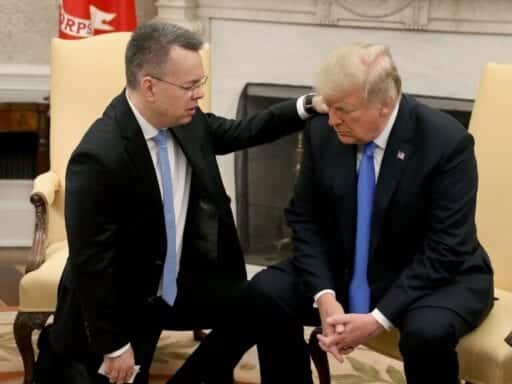 The president held a televised meeting with Andrew Brunson in the Oval Office a few hours after his return to the US.

After Pastor Andrew Brunson, who was detained in Turkey for more than two years, finished a prayer in the Oval Office for the president whose administration had brought him home, Donald Trump was curious about just one thing.

“Can I ask you one question,” Trump asked. “Who did you vote for?”

Amid the awkward, forced laughter that ensued, Trump turned to his Cabinet and added in a faux whisper, “I knew the answer.”

It’s not clear whether the president was addressing Brunson, who had just returned safely to the United States after his release from Turkish detention, his wife who attended the Oval Office meeting by his side, or both. The pastor was arrested along with thousands of others after a failed 2016 coup attempt, and was accused of aiding the movement against Turkish President Recep Tayyip Erdogan.

It’s unlikely the American pastor, who had lived in Turkey for 23 years and was imprisoned a month before the 2016 election, even cast a vote. His wife Norine Lyn, who was briefly imprisoned but released before Election Day, conceivably could have. Neither of them could be heard answering Trump’s question.

After the prayer, Trump says, “Can I ask you one question? Who did you vote for?” (via Fox) pic.twitter.com/85dlXShHFk

The pastor’s detainment had created a huge rift between the two NATO allies. Trump had placed sanctions on two high-ranking Turkish officials and tariffs on Ankara’s steel and aluminum sectors because the country wouldn’t release Brunson.

Brunson’s release marks a huge diplomatic victory for Trump, who celebrated his return and noted his resilience in the aftermath of the arrest.

“I just want to congratulate you because you have galvanized this country,” Trump told Brunson during their meeting.

As Vox’s Alex Ward notes, the Trump administration has made freeing Americans held abroad a “priority” — to great success. The pastor was out of prison and under house arrest in Turkey since July. After being convicted on his charges on Friday, the judges sentenced him on house arrest and removed his travel ban.

Before the prayer, Brunson offered his thanks to the president for negotiating his release.

“I really want to thank the administration,” Brunson said. “You really fought for us, unusually so. From the time you took office, I know that you’ve been engaged.”