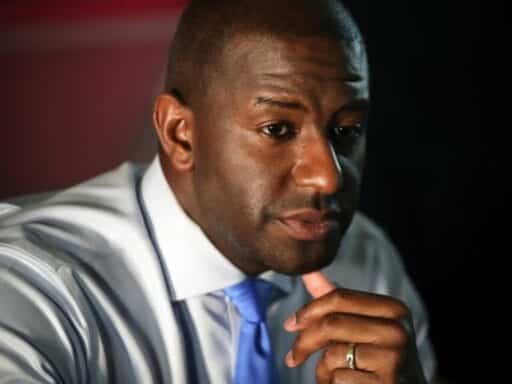 The mayor of Tallahassee just pulled off a major primary upset in Florida’s governor’s race.

Gillum, 39, is the mayor of Tallahassee. He’s running on a progressive platform that includes Medicare-for-all and a $15 minimum wage, and has been endorsed by Sen. Bernie Sanders (I-VT) and progressive billionaire Tom Steyer.

His showing in the Florida primary tonight is history-making; Gillum is the first African-American gubernatorial nominee in the state. It’s an exciting moment for progressive groups, but also for black Democrats in the South; next door, Stacey Abrams is the Democratic nominee in Georgia. If Abrams wins, she could be the nation’s first African-American woman governor.

Gillum is originally from Miami. One of seven children, the nominee’s mother was a city bus driver, and his father was a construction worker. He spoke about his family’s humble beginnings in a March campaign ad.

He entered Tallahassee city politics at a young age. When he was 23, he was elected to the Tallahassee City Commission with just $6,000 in campaign cash, but a strong, locally organized ground game, according to a profile by BuzzFeed’s Darren Sands.

Gillum was surging in polls in the days before the race, but even though progressive groups were very excited about him, he remained fairly under the radar until the week before Election Day. National groups including Indivisible, Democracy For America, Our Revolution, and Collective PAC all threw their support behind him. Billionaire Tom Steyer and his group NextGen also made a significant financial investment of $1 million in Gillum’s campaign.

Even so, Gillum had far less campaign cash than most of his Democratic competitors.

Candidate only; Gillum had decent outside support. But still …

Polls had shown Graham, a former one-term Congress member and daughter of storied Florida governor and US Sen. Bob Graham, in a comfortable lead. Gillum more than doubled his percentage from pre-election polls to Election Day.

In the days before the race, it was clear that Gillum had surging momentum. Even so, some of the state’s pollsters thought it might not be enough.

“Gillum is definitely rising,” Steve Schale, a Democratic operative in the state, told Vox’s Dylan Scott. “When you have four people in the race, typically the one who is rising at the end is the one not being attacked.”

It appears Gillum may have benefited from his Democratic competitors looking at his poll numbers and not taking him seriously. An FBI investigation into corruption in Tallahassee city government — specifically, how the city’s the community redevelopment agency used taxpayer money — has been hanging over Gillum’s campaign, even though there is no evidence that Gillum has been implicated in the investigation or is even a focus of it. The investigation is still ongoing, per a Tampa Bay Times story last month, and FBI officials have said little about it so far.

Gillum’s Democratic opponents also said little about it during the primary. As the Tampa Bay Times’s Kirby Wilson wrote:

A Florida voter would be hard-pressed to find a negative television advertisement about Gillum. And when Chris King, one of Gillum’s opponents, was asked about the investigation in a gubernatorial debate in June, King defended Gillum.

Judging from Gillum’s stunning performance on Tuesday, the FBI investigation didn’t tarnish the candidate’s last-minute surge. But with Trump-backed Republican DeSantis winning the Republican nomination for governor, it could emerge as more of an issue in the general election.