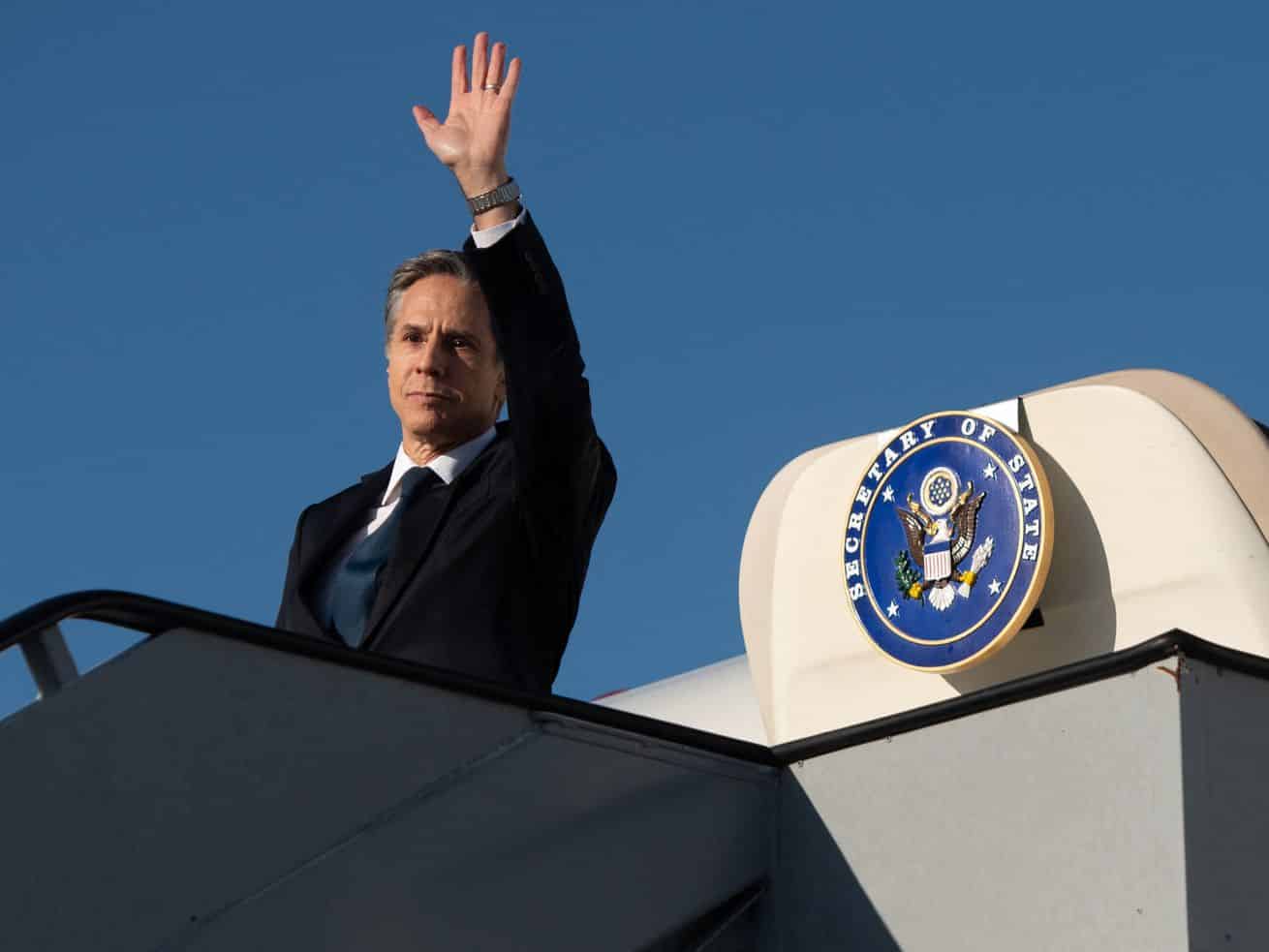 “Telephonic diplomacy” was enough to succeed in this case. But it has its downsides.

Secretary of State Antony Blinken had a choice to make. It was mid-May, and in a few days he’d travel to Europe for talks with allies on the Arctic and climate change, and to meet with his Russian counterpart ahead of a presidential-level summit in June.

But a fight broke out between Israel and Hamas in Gaza, threatening to explode into a larger, bloodier conflict.

Looking at his agenda and the events in the Middle East, Blinken consulted with his staff and the White House on what he should do. There were discussions about having him drop everything to shuttle back and forth between Middle Eastern capitals and help broker a ceasefire. Instead, Blinken decided he should keep his long-planned commitments in Europe but, along with other administration officials, get on the phone with key players in the brewing war.

He made that choice, the opposite of what previous secretaries of state had done during recent Israel-Gaza conflicts, for two main reasons.

The first was that he could still engage in “telephonic diplomacy” while in Europe, in the words of a senior State Department official, without the risk of having to potentially fly home empty-handed and embarrassed.

The second reason, though, speaks to the Biden administration’s view of foreign policy writ large: Less is sometimes more.

“I find that in the current moment in Washington, although it’s been true for a long time, the answer is to do more. Everyone wants more, more, we should be doing more,” said a senior State Department official who, like two others, spoke to me on the condition of anonymity to discuss sensitive internal deliberations. “Of course, more of everything is not a strategy.”

Blinken and others in the administration simply don’t believe solving a regional crisis requires top officials like Blinken to drop everything and fly to the hot spot, especially if there are larger, more consequential, longer-term issues to focus on elsewhere.

“I think it’s very important, given the geostrategic situation, the challenges we face, we be very disciplined and focused on the strategic direction,” the official continued, adding that the US can still “walk and chew gum at the same time.”

It’s not that the US was disengaged from the Israel-Gaza conflict. Top administration figures made more than 80 calls to world leaders during the conflict — with Blinken on the phone for at least 15 of them while in or traveling between Denmark, Iceland, and Greenland — in service of the ceasefire reached after 11 days of fighting.

But Biden’s team felt keeping to the European itinerary was better for the administration’s agenda in the long run and for the conflict in the short run.

“If Blinken had gone [to the region], it actually would’ve slowed things down,” said Dennis Ross, a distinguished fellow at the Washington Institute for Near East Policy, because neither Hamas nor Israel would’ve wanted to look like it was caving to the US.

Critics say much of that is beside the point. When it mattered most, it looked as though the US washed its hands of the situation and let the bombs fall where they may.

“It seemed from the outside that the administration was less interested in intervening and more interested in running interference for Israel’s own operations in Gaza,” said Omar Rahman, a visiting fellow at the Brookings Doha Center. “They damaged their own claim to lead the world on human rights, even if they were working hard behind the scenes to bring a halt to the fighting.”

This episode underscores a challenge the Biden administration will likely continue to face. Many will clamor for the US to visibly involve itself in crises in lieu of keeping a laser focus on longer-term challenges. But strategy is one thing; public perception is another.

For now, that doesn’t bother Biden’s team. “We shouldn’t allow reflexive thinking and unevolved thinking to dictate what we do and how we do it,” said another senior State Department official.

When I discussed Blinken’s European schedule with one of the State Department officials, it was clear the secretary and his staff agreed canceling his appearances there would be the wrong call.

The first part of Blinken’s trip was to Denmark, a nation that needed tending to after its bad relationship with the Trump administration. Then it was off to Iceland for a meeting with the Arctic Council, the eight-country organization that coordinates policy in the High North. It would’ve been “unfortunate” if Blinken’s was the only empty seat at the table, the official said, especially as Russia takes over as temporary chair of the council for two years.

Blinken and his staff also felt it was important to hold bilateral meetings with his counterparts to discuss matters ranging from climate change to pandemic response. The most important of these was a one-on-one with Russian Foreign Minister Sergey Lavrov. Their discussion set the table for next month’s summit between President Joe Biden and Russian President Vladimir Putin.

All this “gives you an idea of what would have been put at risk if he had pulled it down,” the State official said.

The key message from my conversations with US officials was that sending Blinken to Cairo or Jerusalem would’ve kept him from reassuring allies, defending US interests in the Arctic, pushing for actions on climate change, coordinating global coronavirus efforts, and preparing Biden for a tense meeting with Putin. Though no one minimized the importance of ending the violence between Israel and Hamas, most experts I spoke to said the European agenda was robust enough to keep it.

“I think they made the right call,” said Heather Conley, senior vice president for Europe, Eurasia, and the Arctic at the Center for Strategic and International Studies think tank in Washington, DC. “Usually it’s the urgent overshadowing the important, but this was working on the important while also managing the urgent.”

What’s more, she said, it’s never a good idea to send your top diplomatic official by themselves to solve thorny problems. “The secretary of state doesn’t always have to be the desk officer of the crisis of the moment,” Conley told me.

Martin Indyk, who served as the US special envoy for Israeli-Palestinian negotiations from 2013 to 2014, recapped for me the last two times a secretary of state flew to the region during a flare-up.

Then-Secretary of State Hillary Clinton traveled to Egypt and other nations in 2012 when calls to counterparts weren’t working. Her efforts helped secure a ceasefire, making it seem like that should be the playbook: When there’s a crisis, send the secretary.

But the new secretary of state, John Kerry, wasn’t as successful two years later. Despite drafting a ceasefire document for Israel and Hamas to work from, he came back to Washington “really humiliated,” Indyk said.

Watching those events from within the Obama administration was Jake Sullivan, now Biden’s national security adviser. What he took away from both cases, per Indyk, was that the nation’s top diplomat should travel to the area only to finalize terms that could make the ceasefire a success. Otherwise, the chances of in-person engagement working remained low, leading to inevitable embarrassment for the secretary and the administration.

That seems to have informed some of the thinking for why Blinken is in the region now, and not earlier. Once both sides agreed to stop fighting, he went to Israel to demonstrate that America still has its back and to meet with Palestinian leadership to announce more financial support for Gaza.

That trip was more effective than, say, spending time to quash Israel and Hamas’s beef amid the fighting.

“A premature intervention would’ve prolonged the crisis, it wouldn’t have ended it,” said Indyk, now at the Council on Foreign Relations. “The way to move Israel forward is to put your arm around them, reassure them that you’re in their corner, and push them in the direction you want to go.”

Threatening to place conditions on arms sales or call for a ceasefire early, as some critics from the left wanted, likely wouldn’t have worked. “The Israelis would dig in their heels and say, ‘Screw you, we’ve got rockets falling on our people and we’re going to respond,’” Indyk continued. Plus, he and others said, Hamas surely would’ve defied the US by launching more than the 4,500 rockets they did.

That a ceasefire came together after 11 days, and that Blinken was welcomed by both warring parties shortly after the fighting, has led Biden administration officials to consider their efforts a clear success.

“It was an affirmation that we’re a country that’s big enough and capable enough to do multiple things at once,” said a State official.

The Israel-Gaza strategy may have worked. The messaging didn’t.

One of the senior State officials I spoke with hinted they may consider this play again.

Blinken “was able to keep an important agenda moving forward on long-term strategic interests while maintaining a focus on the near-term crisis. That’s probably how we need to look at things going forward, as well,” the official told me.

In other words, don’t expect top officials such as Blinken, Sullivan, or even Secretary of Defense Lloyd Austin to divert from their schedules during the next crisis if they have more strategic issues (in their minds) to attend to.

That’s not to say the administration’s handling of Israel-Gaza was perfect or should necessarily be a model.

Ross, the Washington Institute for Near East Policy fellow who spent more than a decade working on the Israeli-Palestinian peace process in government, noted that deploying Deputy Assistant Secretary for Israel and Palestinian Affairs Hady Amr — an experienced and capable senior aide, but still ultimately an aide — to the region fed perceptions that the US cared little about the fighting. “There’s no doubt that sending someone at that level didn’t signal a level of engagement at a high enough level,” Ross said.

But Brookings’s Rahman said his problems with the administration’s play had less to do with Blinken’s absence and more to do with what the US did on the whole. “I think there are ulterior motives at work, and it had very little to do with the ceasefire itself,” he said. Namely, “they weren’t interested in pursuing a ceasefire until Israel had done what it wanted to do.”

Which brings it back to the messaging issue Biden’s team will struggle with. Again, it’s all well and good to focus on strategic priorities, but the US still has to show where it stands on certain crises. And when the administration had the chance early on, it appeared to many that the US was only worried about Israel’s legitimate right to defend itself from rocket attacks, not how the war might affect innocent Palestinians in Gaza.

The overall play to end the fighting may have worked, then, but the administration didn’t necessarily win the perception battle. Biden’s handling of Israel-Gaza may not be just a flashpoint of his early presidency; it may serve as an example of a recurring problem in the years to come.

Watch: Michelle Wolf performs a “Salute to Abortion” on The Break
The coronavirus crisis has revealed what Americans need most: Universal basic services
The 2020 US House elections
Promising Young Woman finds the thrill in obliterating nice guys
Most teachers spend their own money on their classrooms. 7 educators explain.
The key lesson from school openings abroad: Contain the virus