Why German spies blew up this US island 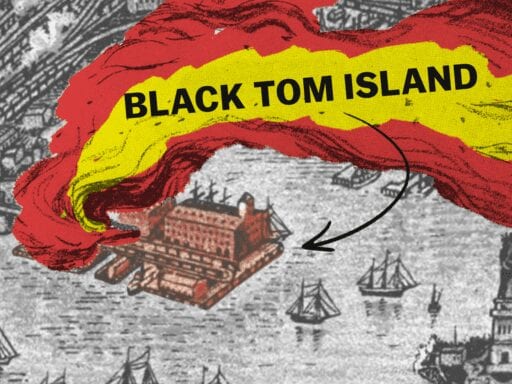 And how they almost got away with it.

In the years leading up to the United States’ entry into World War I in 1917, the nation was neutral. They still profited from the war, though, by manufacturing munitions and selling them to both sides. But a British naval blockade around Germany made it impossible for the Central Powers to acquire American arms. As a result, Germany established a ring of saboteurs and spies within the US, secretly destroying munitions factories and ships, and trying to make it look like an accident.

The signature attack of this campaign occurred on July 30, 1916. Saboteurs set fire to a massive stockpile of munitions ready to ship from Black Tom Island, a munitions depot in New York Harbor — and the explosion was felt for miles. But because the US had no infrastructure of domestic intelligence at the time, it took decades to prove that it wasn’t just an unfortunate accident. This German sabotage campaign ultimately laid the groundwork for the establishment of domestic intelligence agencies specializing in counterespionage in the US.

Watch the video above to learn more about the story. You can find this video and all of Vox’s videos on YouTube. And if you’re interested in supporting our video journalism, you can become a member of the Vox Video Lab on YouTube.

Understand the unfolding coronavirus outbreak with these Vox podcast episodes
Tropical Storm Barry: where the storm is and where it’s heading
The Safest Ways to Dine Out During the Coronavirus Pandemic (If You Must)
Young Latinx voters could be the ones who finally flip Arizona
The Supreme Court’s confusing new “religious liberty” order, explained
The Dow Jones is now lower than it was when Trump took office