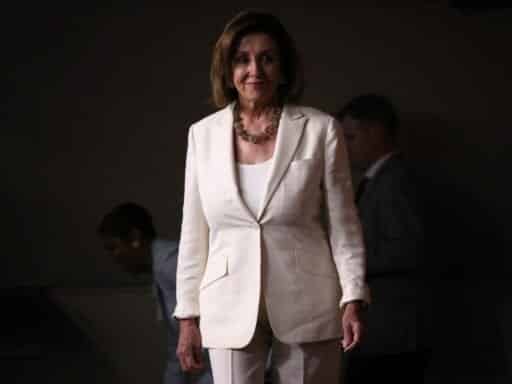 The House of Representatives devolved into chaos Tuesday over whether House Speaker Nancy Pelosi had the right to say that President Donald Trump’s tweets attacking four progressive lawmakers of color were “racist,” as a matter of official record.

The controversy started during a debate over a House resolution condemning Trump’s tweets, in which he said the four lawmakers, three of whom were born in the US, should “go back” to other countries. (The resolution ultimately passed on a vote of 240-187, with four Republicans voting in favor.) Pelosi called the tweets racist during a speech on the House floor.

“Every single member of this institution should join us in condemning the president’s racist tweets,” Pelosi said. “To do anything less would be a shocking rejection of our values and a shameful abdication of our oath of office to protect the American people.”

Republicans called for Pelosi’s words to be removed from the official record, arguing the speaker broke a House parliamentary rule that states lawmakers cannot malign the character of the president.

What ensued was hours of tumult that pushed Democrats and Republicans into their respective corners, caused the former chair of the Congressional Black Caucus to “abandon” his duties presiding over the House floor, and that left Pelosi — the House speaker — temporarily banned from speaking on the floor for the rest of the day. (We’ll explain all of this).

The mayhem comes down to House Republicans’ refusal to censure Trump, no matter the extremity of his rhetoric. Since his weekend tweets, Trump has not backed down on his comments about Democratic Reps. Alexandria Ocasio-Cortez, Ilhan Omar, Ayanna Pressley, and Rashida Tlaib, saying they “hate” the United States. Republicans have been steadfast in defending him.

“Let us preserve those ideals of order and decency this body was founded on,” Minority Leader Kevin McCarthy said on the House floor as he called for Pelosi’s remarks to be removed from the record. “Madame Speaker, it’s not just our nation that’s watching, but the world is watching. I hope you can rise to this occasion.”

But for Democrats, now in the House majority, Pelosi’s statement — and the resolution — are a matter of accountability.

“We can’t be gagged when we want to criticize the actions of the president,” Rep. Jamie Raskin (D-MD) said.

In the middle of a vote, civil rights icon Rep. John Lewis (D-GA) told reporters outside the floor of the House, “The president is a racist. We cannot deny that.”

Nancy Pelosi’s fight to call Trump’s tweets racist and the mayhem on the House floor, explained

Pelosi calling Trump’s tweets racist on the House floor was met with immediate objection from the Republican side of the aisle.

.@SpeakerPelosi: “Every single member of this institution…should join us in condemning the president’s racist tweets. To do anything less would be a shocking rejection of our values and a shameful abdication of our oath of office to protect the American people.” pic.twitter.com/nsskh7TuCS

But Pelosi said the parliamentarian (the official who advises representatives on the House’s rules) had already signed off on her speech, and refused to withdraw her words. Then came the chaos.

Republicans and Democrats engaged in an hour-long deliberation, with tensions escalating on the floor. Rep. Emanuel Cleaver (D-MO), the former leader of the Congressional Black Caucus who was presiding over the House floor during Pelosi’s speech, decided to “abandon the chair” out of frustration.

“We don’t ever, ever want to pass up, it seems, an opportunity to escalate,” Cleaver said, chastising the lawmakers on the floor. “I dare anyone to look at any of the footage and see if there was any unfairness. But unfairness is not enough because we just want to fight. I abandon the chair.”

In Cleaver’s absence, House Majority Leader Steny Hoyer (D-MD) took the chair and brought with him a decision — one that surprised his own party. He ruled that Pelosi’s remarks were not in order. In other words, he ruled that lawmakers, including Pelosi, could not say Trump or his tweets were racist. Instead, they would go on to say the rhetoric coming out of the White House was. (That’s how closely House members were parsing their words.)

That ruling pushed the House floor to a vote: The body as a whole would have to decide whether Pelosi’s comments calling Trump’s tweet’s racist would be removed from the official record. Democrats stood in lockstep: The motion to strike them failed 190-232. Independent Rep. Justin Amash (MI), who recently left the Republican Party, voted with Democrats.

But that wasn’t the only vote the body had to take. Because Hoyer ruled that Pelosi’s words had violated decorum, Pelosi got the punishment House members receive for speaking out of turn: not being allowed to speak on the floor for the rest of the day. That punishment was overturned by a vote, too.

“The speaker engaged in a small-but-necessary act of legislative civil disobedience,” Rep. Raskin said. “She needed to tell the truth about the president’s remarks.”

Raskin added, “There is a logic for parliamentary rules to prevent us from engaging in ad hominem attacks, where we attack the personality or character of the president. But Speaker Pelosi didn’t do that. She criticized his remarks. And members of the House have to have the right to do that. To criticize policy and remarks of the president. That’s a necessary implication of the separation of powers.”

Blame Thomas Jefferson for the obscure parliamentary procedure behind all this

The crux of this fight is a line in House parliamentary procedure that “personal abuse, innuendo, or ridicule of the President is not permitted.”

As Josh Chafetz, a law professor at Cornell Law School, pointed out in a Twitter thread, this is not actually a standing rule of the House. Instead, it’s a “precedential ruling of the chair” of the House, which is laid out in the Thomas Jefferson Manual of Parliamentary Practice.

1/ So, here’s the thing: That’s not a standing rule of the House; it’s a precedential ruling of the chair, set down in the annotated version of Jefferson’s Manual of Parliamentary Practice contained in the House Manual. https://t.co/aomVsuWQXc

Here’s the backstory: In 1801, the founding father and third president (and, it should be noted, a slaveholder) drafted the Thomas Jefferson Manual of Parliamentary Practice, the first book on parliamentary procedure in the United States.

“This manual Thomas Jefferson created for himself when he was vice president,” Chafetz told Vox in an interview. “It was a manual of precedence he thought would be useful from British parliamentary practice.”

Though Jefferson’s parliamentary manual was first used and then later discarded by the US Senate, the House adopted it in 1837 — and has continued to use it.

The part of Jefferson’s parliamentary manual that applies to the current situation with Pelosi was adopted from the British Parliament; members of Parliament could not “speak irreverently or seditiously against the King.” Basically, they couldn’t insult the monarch on the floor of Parliament.

Of course, it’s not as though the modern-day House is following Jefferson’s original manual word for word as it was written in the 1800s. House parliamentary law has been updated many times; the most current reading of Jefferson’s original writing is that “personal abuse, innuendo, or ridicule of the President is not permitted” on the floor of the House.

Notably, if you look back at the congressional record, there’s an instance of a member’s words being struck for calling George W. Bush racist. But, as Chafetz noted, it’s happened more frequently since Trump has taken office.

“What’s interesting is how many of them are post-November 2016,” Chafetz said. “They’re clearly a Republican presiding officer ruling out of order something a Democrat said about Trump.”