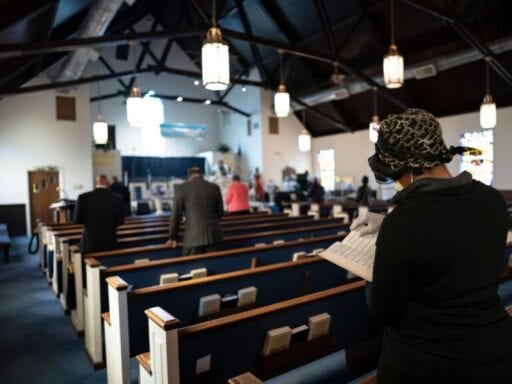 A number of churches across America are holding in-person services to celebrate Easter Sunday, despite federal guidelines calling for people to avoid public gatherings.

The issue of whether to hold in-person Easter services has revealed a split among top conservatives, with President Donald Trump encouraging Christians to worship from home while observing social distancing protocols, and members of the House Freedom Caucus arguing that restrictions on church services are an affront to First Amendment rights of freedom of religion and assembly.

While many churches are remaining closed as part of a nationwide effort to slow the spread of coronavirus, there are numerous reports of churches and even megachurches deciding to hold services.

In at least eight states, religious organizations have been deemed essential services, allowing them to be exempt from stay-at-home orders. While the majority of churches around the country have experimented with alternatives to conventional services — things like livestreamed prayers and drive-in services in parking lots — there have been clashes over restrictions on Easter Sunday, which would in normal circumstances lead to a huge boom in church attendance.

State and local officials have begun taking action to limit attendance at religious services, with mixed results. For example, the mayor of Louisville, Kentucky, issued an order prohibiting drive-in church services for Easter weekend, but a church sued the mayor and the city — and won a temporary restraining order from a federal judge who deemed the policy unconstitutional. US District Judge Justin Walker wrote in his order: “On Holy Thursday, an American mayor criminalized the communal celebration of Easter.”

In Kansas, state lawmakers overturned the governor’s executive order restricting religious gatherings to 10 people ahead of Easter, calling the order “a blatant violation, of our fundamental rights.”

And other religious leaders have held services in violation of state orders.

The Life Tabernacle Church near Baton Rouge, Louisiana expected a crowd of more than 2,000 on Easter Sunday despite a ban on gatherings of over 50 people in the state.

The church’s pastor, Rev. Tony Spell, said his faith would protect him and his attendees from falling ill. “God will shield us from all harm and sickness,” Spell told Reuters. “We are not afraid. We are called by God to stand against the Antichrist creeping into America’s borders.”

Spell made this proclamation despite having faced legal consequences for defying state restrictions in the past: He has already been charged with six misdemeanors for holding services.

As Slate’s Daniel Politi reports, some churches think of Easter as simply too important of a day to conduct services online, and are trying to find ways to offer socially distant in-person services. The Glorious Way Church in Houston will split its services into two sessions, offer hand sanitizer, and limit a 1,000-person space to 100 congregants.

“If it’s a crisis, the church should be able to dispel fear and panic and not join in with the fear and panic,” the church’s pastor John Greiner told the Texas Tribune. “We can’t really make a difference in our world just online.”

In Washington, there’s a split on Easter Sunday social distancing

“Calling on individuals to have greater awareness of their environments, keep reasonable distance from others, and strive to maintain better hygiene may all be warranted as we continue to confront the many unknowns of this virus,” Biggs and Hice wrote. “Prohibitions on worship have no place in these restrictions.”

“Members of many faiths are called upon to gather in community to worship,” they continued. “And the First Amendment protects their right to do so. Sadly, many leaders around the country have taken this pandemic as an opportunity to deem worship gatherings non-essential.”

In particular, Biggs and Hice decried that Kentucky Gov. Andy Beshear’s ban on mass gatherings applies to church services, and that Beshear has pledged to record the license plates of people attending Easter services and impose a quarantine order on them. “There is no place for this behavior in America,” Biggs and Hice wrote.

While Trump said in March he hoped to have “packed churches” on Easter, he has in more recent days encouraged people to continue observing social distancing orders on the religious holiday. On Saturday, he tweeted that he would be tuning into a livestream at Dallas’s First Baptist Church rather than attending a service in person.

And on Sunday, he tweeted out a video message encouraging people to continue social distancing practices despite it being Easter.

“[T]his Easter will be much different than others, because in many cases we will be separated physically only from our churches,” Trump said. “We won’t be sitting there next to each other which we’d like to be. And soon we’ll be again. But right now we’re keeping separation.”

Clearly, not everyone agrees with the president on this issue. But should he want to ease social distancing in the weeks to come — as he has suggested is the case — Trump will have to find a way to convince the public not to gather in close spaces. Should such gatherings continue, reductions the country has seen in confirmed cases could halt, making the case for “reopening” parts of the country far more difficult to make.

Having a bad day? Dave Eggers can help.
How to topple dictators and transform society
“I’m a bit of an overwriter”: How Carly Rae Jepsen whittled 200 songs down to 12
New Jersey just became the 15th state to pass a bill letting unauthorized immigrants obtain driver’s...
The court decision dismissing charges against Michael Flynn is astonishingly bad
Mail has never been more important. Here’s what it’s like to be a postal worker now.