Why the new Covid-19 variants could kill more people, in 2 charts 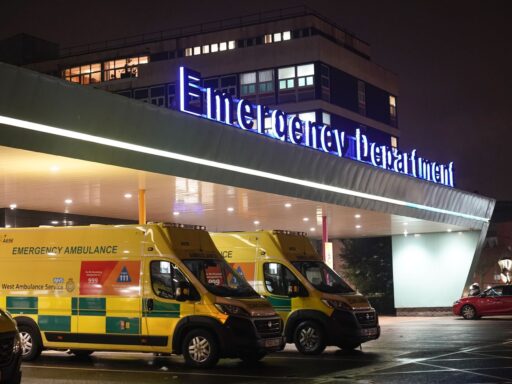 Here’s why epidemiologists are so concerned about more transmissible versions of SARS-CoV-2.

A more contagious SARS-CoV-2 virus is a deadlier one. Not because it gets any individual sicker but because it reaches more people. More illness means more cases: more mild cases, more severe cases, more long-term complications, more hospitalizations, and more deaths.

There’s no one perfect estimate for how much more contagious the SARS-CoV-2 variant called B.1.1.7, which was first discovered in the UK, might be. There needs to be more careful lab work done in animals to nail it down, which could take a few more weeks. But preliminary estimates find it to be between 30 percent and 70 percent more contagious. This variant is now popping up all over the world: in the US, throughout Europe, in Asia, and elsewhere. It’s especially concerning, considering that, in the US and elsewhere, the pandemic’s spread is still reaching new heights.

There’s also a variant called 501Y.V2 that was first found in South Africa; it appears less widespread than B.1.1.7, but also to be more contagious than older variants. It’s still possible that other more transmissible variants will emerge in the future. Scientists just don’t know.

Regardless of exactly how transmissible any new variant is, any possible increase in transmissibility is extremely concerning to epidemiologists and others in public health. It means now, more than ever, our collective and individual actions to stop the spread are critically important.

Here are a few key reasons why.

The reason for concern over a more contagious variant of the virus is simple. “Once it [the variant] becomes common, it will accelerate transmission considerably,” Harvard epidemiologist Marc Lipsitch said on a press call. Accelerated transmission means more cases.

That’s because the virus grows exponentially. Any increase in its inherent transmissibility causes an increasingly high number of cases down the line, if control measures don’t also accelerate to keep up.

With a 50 percent increase in infectiousness, “in less than two weeks, you get twice the number of cases,” Lipsitch says. “And in a month or so, you have four, five times as many cases. But that’s very approximate.” It could be higher, he says.

Epidemiologists think about the transmissibility of a virus with a figure called R, or the basic reproduction number. This describes how many new cases, on average, will follow one case of the virus.

In the beginning of the outbreak, before the world sprang into action, epidemiologists estimated the R to be around 2 or 3. Since then, thanks to our (inconsistently implemented) efforts — mask-wearing, social distancing, business closures, etc — the R has been reduced in many states to around 1.1 to 1.2. But as long as the R figure is greater than 1, the virus can spread exponentially.

Let’s say a community has gotten its R value down to 1. Then a 50 percent more transmissible variant comes along. It could mean that the same mitigation effort that got the old variant of the virus down to 1 now only gets it down to 1.5.

Which is to say: To combat a more transmissible version of the virus, communities need even more stringent controls.

A 50 percent more transmissible virus, Lipsitch says, means “we need to cut our contacts down by another third compared to the already strong restrictions [already in place] in order to get back to the same place where we were.” That could mean closing down businesses that have partially opened back up, closing down schools, and other such lockdown measures.

If communities do nothing in the face of a more contagious variant, the numbers could add up very quickly. Bill Hanage, another Harvard epidemiologist, walked me through the following thought experiment.

Let’s say a community has the virus more or less under control. The R value in the area is 1, which means the number of cases in the area remains constant, month to month.

A more transmissible virus also increases the threshold for herd immunity, or the rough estimate of the percentage of people in a population who need to achieve immunity, ideally via a vaccination, in order for the outbreak to decrease in size.

Herd immunity thresholds are dependent on the value of R. The higher the R value, the higher the threshold. If a more transmissible variant becomes dominant the world over, it increases pressure on vaccination campaigns to vaccinate even more people. Already, it’s looking like upward of 70 percent of the population will need to be immune to achieve herd immunity (though the exact figure needed is unknown). That’s already an extremely high and difficult bar to clear, given the slow early distribution of the vaccines.

There’s also the yet-to-be-realized possibility that the virus could mutate into a form that reduces the efficacy of the current vaccines.

One good piece of news about the B.1.1.7 variant: So far, it doesn’t seem to be any deadlier than older variants of the virus. That is: Any individual who gets it isn’t any more likely to end up in the hospital or die, according to the early data.

But more infections mean more death. “In general, the more people get infected, the number of hospitalizations and deaths rise accordingly as a proportion of that number,” Emma Hodcroft, a molecular epidemiologist at the Institute of Social and Preventive Medicine in Switzerland, says. “So more cases is also bad news.”

A 50 percent more contagious virus is even a deadlier concern than one that’s 50 percent more deadly, as London School of Hygiene & Tropical Medicine epidemiologist Adam Kucharski explains on Twitter.

Increase the deadliness of the virus by 50 percent in that scenario and you’d expect 193 deaths — a 49.6 percent increase.

Increase the contagiousness of the virus in this scenario by 50 percent and you get 978 deaths, Kucharski finds. That’s a 658 percent increase. That’s a theoretical calculation, but the central point is the exponential effect, as Kucharski explains.

It’s not entirely clear if this will come to pass

Hanage stresses that the 50 percent more transmissible figure being reported is based on how this variant behaves in the UK. In a different place — with different adherences to social distancing, different mitigation measures in place — the new variant could behave differently. It’s complicated, yes, but that’s outbreaks for you.

But even the hypothetical threat of a more transmissible variant is a call for action.

To stop more mutations from happening, to stop more potentially problematic variants from popping up, we need to stop the spread of SARS-CoV-2 in general. For one, that helps us deal with the pandemic overall. But “that’s also conveniently how we get fewer emerging variants,” Angela Rasmussen, a virologist with Georgetown’s Center for Global Health Science and Security, told me in a December interview. “If the virus isn’t replicating, it can’t mutate. And if it can’t mutate, the new variants can’t emerge.”

The new variant mean our individual actions matter more than ever. This variant spreads in the same manner as other SARS-CoV-2 variants, and the same precautions apply. Social distancing, mask-wearing, and ventilation are as important as ever.

With the new variant around, Lipsitch says, “Your isolation and quarantine and contact tracing is considerably more important, even more than it was before. So you’re doing more for the world.”

The Village Voice has been shut down
US charges former US Air Force officer with spying for Iran
High-stakes brinksmanship in the Pacific as China expands reach into the South China Sea
Immigrant detainees are fighting to be released in the pandemic
Watch: the first footage of Doctor Who’s first woman Doctor is here
Young people have a stake in our future. Let them vote.