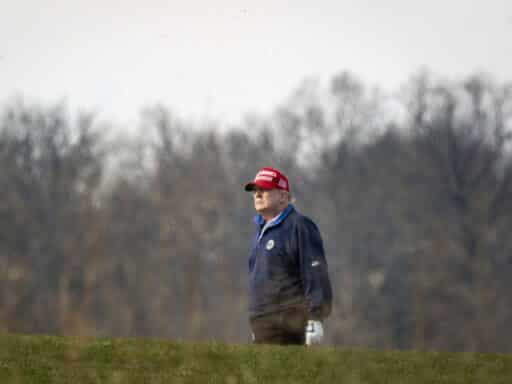 The decision comes in the wake of Trump’s encouragement of a rally in Washington, DC, that resulted in a mob storming the Capitol building and at least five deaths. For years, the president has used his Twitter account to reach his nearly 90 million now-former followers on the platform as a means to bypass traditional media. Many critics have long argued that Twitter should take a firmer stance against Trump due to his dangerous use of the platform to spread lies and violent rhetoric. While some may see the move as too little, too late, and Trump’s supporters are questioning it entirely, it nevertheless marks a historic exertion of Twitter’s ability to influence politics during a time when the strength of democracy in the US is being seriously tested.

“In the context of horrific events this week, we made it clear on Wednesday that additional violations of the Twitter Rules would potentially result in this very course of action,” read a company blog post on Friday explaining the decision. Despite the fact that Twitter has generally allowed world leaders like Trump to post more controversial content than the average user since their tweets are deemed newsworthy, the company said that these accounts are still “not above our rules entirely and cannot use Twitter to incite violence, among other things.”

Ahead of the permanent ban, Twitter had previously temporarily suspended Trump’s tweets on Wednesday for violating its policies on civic integrity and violence, and warned that it may permanently suspend him if he continued to violate its policies. Now, users can no longer see Trump’s tweets, and the president is unable to post on his account.

After close review of recent Tweets from the @realDonaldTrump account and the context around them we have permanently suspended the account due to the risk of further incitement of violence.https://t.co/CBpE1I6j8Y

The move comes as hundreds of Twitter’s own employees urged CEO Jack Dorsey to suspend Trump permanently, according to a report by the Washington Post.

The day before Twitter’s permanent suspension, Facebook blocked Trump’s account on its platform, which has tens of millions of followers, from posting and emphasized that the ban would be in place for at least two weeks until President-elect Joe Biden’s inauguration.

Recent events leading to the decision

Twitter’s official explanation for why it permanently blocked Trump’s account was that his last two tweets violated the company’s Glorification of Violence policy and were part of a broader pattern of encouraging violence during the transition of presidential powers. Twitter specifically cited a concern that Trump’s followers seemed to interpret his announcement about not attending Biden’s inauguration as a signal that it would be a “safe” target for violent acts.

The first tweet that pushed Trump past Twitter’s tipping point stated that he would not attend Joe Biden’s inauguration. The second declared that the “75,000,000 great American Patriots” who voted for Trump would not be “disrespected or treated unfairly in any way, shape or form!!!”

Twitter said that, when read in the broader context of the recent violence in DC and how Trump’s tweets can be mobilized by his followers to incite further violence, those two tweets impelled the platform to suspend his account.

In the past week, a growing chorus of leaders in the political and tech communities have been placing more pressure than ever on social media companies to permanently ban Trump. Their concerns correspond with fears that Trump is encouraging his followers to stage some sort of coup by forcefully rejecting the certified results of the presidential election declaring Biden the next president.

“Now is the time for Silicon Valley companies to stop enabling this monstrous behavior — and go even further than they have already by permanently banning this man from their platforms,” former first lady Michelle Obama said in a statement Thursday afternoon.

And hundreds of Twitter’s own employees — who have rarely publicly protested the company’s decisions — came out to say that they felt the company had a moral obligation to shut down Trump’s account.

“We play an unprecedented role in civil society and the world’s eyes are upon us,” the employees wrote in a letter to Jack Dorsey and Twitter executives. “Our decisions this week will cement our place in history, for better or worse.”

People in Trump’s inner circle such as Donald Trump Jr. quickly derided Twitter’s decision, arguing that the company is holding his father to a double standard by not taking down the accounts of Iran’s Ayatollah Khamenei and “numerous other dictatorial regimes.”

A history of controversial tweets

Trump launched his political career on Twitter spreading racist “birtherism” conspiracy theories about former President Obama. And as he continued to gain political power, he has been a prolific user of the platform, regularly spreading false statements, conspiracy theories, and, at times, what many see as dangerous rhetoric veering on inciting violence.

Over the years, the former reality TV star has repeatedly used the platform to retweet conspiracy theorists such as QAnon supporters, spread medical misinformation about Covid-19, suggest potentially shooting into crowds of Black Lives Matter protesters, and at multiple points inched toward potentially provoking a nuclear war via the platform.

And for four years, Trump’s incendiary social media posts have largely gone unchecked by Twitter and other major tech companies. That’s because Twitter, Facebook, YouTube, and other companies have repeatedly said they don’t want to interfere in politics but rather act as neutral platforms committed to free speech values.

Those limits have been tested by Trump’s repeated attempts to interfere with the integrity of the US elections process via social media. In the months leading up to and following the 2020 presidential election, Trump has endlessly spread baseless conspiracy theories about the election being purportedly “stolen” from him, despite having no substantial proof of any such allegations. His repeated assertion that the election was rigged has also inspired some of his fervent followers to doubt the legitimacy of the US Electoral College, fueling the “Stop the Steal” protests which led to Wednesday’s violence.

For some critics of Trump’s Twitter behavior, the company’s actions to limit the president’s tweets are several years overdue. Trump has already built an infrastructure of highly networked social media followers who continue to organize in private groups, alternate social media platforms like Gab and Parler, as well as through the Twitter accounts of other prominent Trump supporters.

However, his administration still has access to two official US government accounts: @POTUS and @WhiteHouse. Those accounts will be handed over to the Biden administration soon, according to Twitter. The company has said it will not suspend those accounts unless it deems that course of action absolutely necessary to alleviate real-world harm.

It’s unclear where Trump will go from here. The natural social media platform for Trump to migrate to, Parler, has fewer rules around content moderation, but those policies are suddenly proving problematic. Around the same time that Twitter permanently suspended Trump, Google banned Parler from its app store, and Apple has warned it may do the same if the platform doesn’t start moderating content more aggressively.

Twitter’s action in banning Trump was an unprecedented move by a major tech company to limit the platform of a major political figure in the interest of preserving democratic stability. And there’s a good chance we’ll be seeing more of that from other companies in the future, too.

Trump signs executive order on immigration, but says 'zero tolerance' will continue
DIY vape juice mixing is on the rise in the face of a federal vaping crackdown
The devaluing of black property has led to the devaluing of black lives
The battle over DACA comes to the Supreme Court
Why Sacramento is still protesting Stephon Clark’s death, one year later
Vox Sentences: Action against the “murderous operation” in Myanmar