Wonder Woman 1984 is a better rom-com than superhero movie 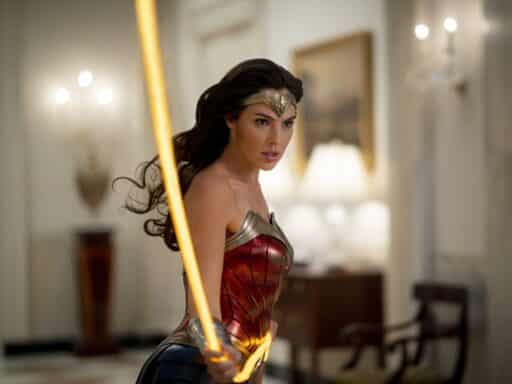 Wonder Woman 1984, for better and worse, feels like three Wonder Woman movies wrapped into one.

Wonder Woman challenges much of what is supposed to make this blockbuster movie era of superheroes cool. She doesn’t have Batman’s dark vengeance, Iron Man’s sardonic edge, or Thor’s party boy vibe, nor does she possess Captain America’s charming self-awareness.

Instead, Amazonian princess Diana Prince (née Diana of Themyscira) is a goddess who saves humanity. Diana talks about the beauty of the world and learning all of its languages, relishes her sacred duty to protect the innocent and fight for those who cannot fight themselves, and dreams of making the world better with one good deed at a time.

Unlike most of those Good Guys, Diana is from a matriarchal land of female warriors. She’s too good for the world of men, Diana’s mother Hippolyta tells her in the first movie. The Queen of the Amazon’s assessment isn’t really about Diana’s superhero abilities and literal godliness. It’s a warning: Diana believes fully in love, truth, compassion, empathy, kindness, and mercy, but this other world is one mired in cynicism and corruption.

The first Wonder Woman stood apart from other DC Entertainment movies in the clarity of Diana’s super-sized morality crisis.

Director Patty Jenkins carefully laid the foundation of the character in the 2017 film, showing how Diana’s hopeful and idealistic worldview leads to fantastic moments, like saving a village that American forces gave up on long ago. But these lofty ideals also have the capability of stranding Diana in hesitation. When she finds out that humans are just capable of evil on their own and that the world of men are undeserving of her goodness, she questions if they’re even worth saving.

With Diana, the tension is not that her life is in danger. She’s always as fast, as strong, and as durable as her enemies. Rather, it’s whether or not the goddess finds it within herself to sacrifice for people who would likely never do the same for her.

The best moments of Jenkins’s ambitious and hefty sequel, WW1984, engages with Wonder Woman’s very human problem. Diana is a goddess — in appearance, morality, strength, invulnerability — living among mortals, but she is otherwise alone.

But superhero movies, even those with the emotional promise of Wonder Woman, are unfortunately never fully about the emotional fragility our characters can’t punch their way through. Superhero movies are supposed to be big, expensive, loud, and fun. And WW1984 is stuffed to its cinematic seams, sometimes to its detriment.

WW1984 is three movies rolled into one: It’s at once a romance about lost love; a tale about the jealousy in our friendships; and a sad, broken man desperate to take over the world. And it’s only the first two of these that truly take us somewhere wonderful.

Since the first film from 2017, it is impossible for me to see anyone else but Gal Gadot as Wonder Woman and Gal Gadot as anyone else but Wonder Woman. She obviously looks the way we think superheroes are supposed to look — tall and beautiful. But Gadot’s magic is in the small stuff. It’s the small wink that assures you she’s got this or that vague suggestion of a smile as she careens into a tank. Her Wonder Woman lives where joy meets strength.

WW1984 mostly — aside from an opening sequence — swerves away from Gadot’s strengths and asks her to give a chillier take on the character. As its title suggests, we meet Gadot’s Diana in the rambunctious ’80s where she’s a beautiful loner who lives in DC’s Watergate building.

To be clear, she’s not a loner because she lives in the Watergate, but rather because she’s watched the love of her life die in WWI while she maintains near-immortality. Judging from the camera’s lingering shots on old photos of Steve (Chris Pine) in the many nooks around her apartment, Diana still nurses a broken heart.

On a shelf, there’s one picture of Diana and an aged Etta Candy, Steve’s assistant from the first movie. I immediately imagined the stories and laughs they had together, yet the film overlooks the underlying sadness of that: how emotionally exhausting it would be for Diana to know that she’d outlive all of her friends. That has to be equally as devastating as losing her first love.

The one new friend she does make is the dorky Barbara Minerva (played by a devilish Kristen Wiig), a new coworker in the gemology department at the museum where Diana works. How Barbara’s last name does not set off alarm bells in Diana’s head is hard to fathom, considering Diana’s first-hand experience with gods and goddesses. Then again, maybe that’s my fault for expecting logic in a movie about an Amazonian demigod living in Washington, DC.

Barbara, all social awkwardness, can’t seem to decide whether she’s jealous of or attracted to — in a platonic way, of course— Diana’s natural grace. Wiig, who’s made a career out of honing cringe, taps into that well to find Barbara. But she imbues Barbara with just enough friend-envy (frenvy?) that there’s just the slightest bit of relatable menace in the glances she steals and her talk about how easy Diana’s life must be.

The two bond over a weird stone that they soon find out grants wishes. It’s a “poor unfortunate souls” type of situation: One longs to be admired, and the other wants a boyfriend. And does the stone help them? Yes, indeed. And Maxwell Lord (Pedro Pascal) — a television con man loser who sure seems like a certain sitting president’s DCEU analog — has his eyes on the stone and the two as well.

My wish for WW1984 would be much more editing

All of this stone magic results in everybody getting what they want: Diana gets a second chance with Steve; Barbara becomes hot (relatable) and strong (also relatable), and Maxwell Lord becomes less of a loser. But it also results in a lot of movie and not enough script to hold everything together.

For all the globe-trotting Diana does in the film, there’s unfortunately barely any time for her beloved Themyscira, and not enough from her Amazon moms Hippolyta and Antiope. Yet what the movie lacks in Amazonian extravaganza, it makes up for in its romantic reunion between Diana and Steve. Pine, as he did in 2017, brings out the emotional vulnerability of Diana and the movie. He clasps her hand and tells her, “I wish we had more time.” If there is a man worth risking the world for, it is Steve — but he would never allow you to do that. The two share a heavenly romantic moment, and something I’ve thought about long after the movie ended while I got nostalgic over a WWI boyfriend I never had.

At the same time as she’s reuniting with Steve, Barbara starts to pull away from Diana. Barbara becomes stronger, faster, more confident to the point where her behavior shocks Diana. It’s a thrilling glimpse into Diana’s ego. Is she threatened because Barbara’s behavior is rank or is she threatened because, for the first time in forever, she finally has an equal? The answer, just based on how much we’ve seen of Diana’s competitiveness on Themyscira, is more uneasy than it seems.

The frustrating part of WW1984 is that these two solid storylines are saddled with a third. Looming in the background is the maniacal Maxwell Lord who wants to rule the world and wield unrivaled influence. While Pascal is doing great work, lacing American cheesiness into every fiber of his character, I found myself wondering when we’d get back to Diana and Steve, or questioning whether Barbara and Diana would ever be friends again, or asking myself what Diana loves more: being a goddess or being in love?

I’m confident Jenkins could’ve excised Lord, perhaps saved his role for a third installment, smashed together what was left, and created an even better Wonder Woman movie than the first one. Lord’s presence and his motives dull the interesting stuff about Wonder Woman, plunging us into rote superhero territory.

Large adult sad boys who want to take over the world and launch it into an apocalypse is something we’ve seen before (see: Loki in Avengers, Ultron in Avengers: Age of Ultron, Luther and Doomsday in Batman v. Superman: Dawn of Justice, Steppenwolf in Justice League). This formulaic story is something fit for the other guys. The more time spent on it, the less time WW1984 spends being wondrous.