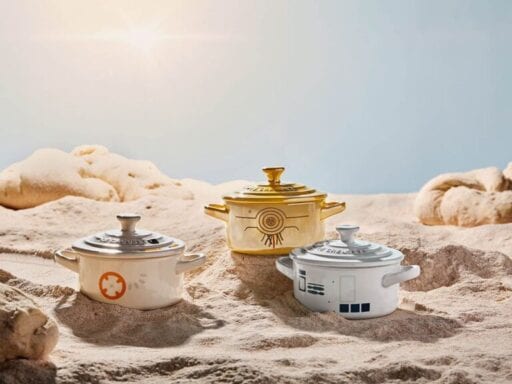 Share
Loading...
A trio of mini cocottes from Le Creuset inspired by the C-3PO, R2-D2, and BB-8 droids from Star Wars. | Le Creuset

If you are a Star Wars super-fan in 2019, you can hypothetically purchase these items to demonstrate your devotion: a $395 Darth Vader dutch oven, a $239 Swarovski crystal figurine of Yoda, or a $599 limited edition Columbia Sportswear parka (inspired by coats worn by the 1979 film crew).

Of course, it helps to have disposable income as a fan — especially for a franchise like Star Wars that produces a cycle of new content almost every year or two. The third installment of the Star Wars sequel trilogy, The Rise of Skywalker, will be released next month to theaters packed with zealous fans. If December feels like a galaxy away, then there’s the new television series The Mandalorian, which you can watch on Disney’s new streaming service Disney+.

The fans who have been with Star Wars since the beginning, however, are tending toward middle-age. As a demographic, they are no longer satisfied with cheap, commonplace souvenirs that anyone could easily own. They’re primed to latch onto special merchandise, especially higher-priced, functional products that could last them for years to come.

In the years since the sequel trilogy’s release in 2015, Lucasfilm — the studio behind Star Wars — has sought out partnerships with lifestyle brands like Adidas, Le Creuset, Levi’s jeans, and Rag & Bone to release Star Wars-related item collections in the lead-up to its movies. (Most of these brands fall within the “mass luxury” category, in the sense that they aren’t exclusive luxury brands but still offer quality and style for middle-range prices.)

“What’s interesting is this phenomenon with how people relate to these products,” he says. “People want to have cookware now, not just a coin or a comic book. The merchandise can be part of what they wear daily or display to guests who come into their homes.”

Expensive, limited-edition collectibles — items that sell for hundreds to thousands of dollars — have long been a fixture in fan culture, Kozinets adds. Products like coins, pins, and even comic books have been manufactured for decades and sold at high prices due to demand from niche groups of fans willing to spend that money.

“People want to have cookware now, not just a coin or a comic book”

There are reports that at Galaxy’s Edge, a Star Wars-themed area of Disneyland, visitors can purchase Kylo Ren’s mask for $750, a complete replica of the First Order Stormtrooper armor set for $6,615, or a life-sized remote-control R2 droid unit for $25,000.

So it isn’t surprising to Kozinets that people are forking out hundreds of dollars for Star Wars t-shirts or sneakers. Quality merchandise sells, and with licensing permission, artists and designers are pushing the creative boundaries of product-related merchandise: “That opens a lot of possibilities for art-like objects to become a part of people’s homes or kitchens.”

Star Wars has served as fashion inspiration for modern designers, and for the release of The Force Awakens, several designers partnered with Lucasfilm to create for auction one-off designs inspired by characters from the film.

“We’ve developed apparel from the mass market up to the end of the trade,” Paul Southern, senior vice president of licensing for Lucasfilm, told Business of Fashion about The Force Awakens merchandise. “We’ve broadened out the offering, including more for girls and women.” (Lucasfilm did not respond to a request for comment from Vox.)

Disney, too, has tapped into a similar sales strategy, one driven by loyal fans willing to purchase anything from Converse sneakers to Gucci purses that are imprinted with the Mickey Mouse insignia.

“Decades-old elements of Disney’s sales strategy would look familiar to today’s hottest fashion brands,” wrote Faran Krentcil in Business of Fashion. Disney would take certain items out of circulation for years and reintroduce them, a tactic Krentcil tied to streetwear’s limited-edition drops.

Lucasfilm and Columbia have previously partnered to release movie-themed jackets with Rogue One, but last year, the outerwear company released a limited line of 500 royal blue jackets inspired by what the film crew wore while filming The Empire Strikes Back.

The parka doesn’t appear in the movie at all, but immediately there was a nostalgic appeal to the item, with fans lining up in front of Columbia Sportswear stores hoping to snag the $500 coat. (The item is no longer available in stores and is upsold on eBay for $599.)

“Star Wars is very much of a nostalgia brand,” Gottlieb says. “[Items like the parka are] an evolution in terms of marketing collectibles, and it’s geared towards a certain type of fan that has the passion and money to invest in unique items.”

The Star Wars franchise has been credited with transforming the market for movie merchandise since its launch in 1977. When creator George Lucas signed with 20th Century Fox to develop Star Wars, he agreed to accept a $350,000 pay cut as director to keep the film’s merchandise rights and the rights to any sequels.

Starting with the first film, Star Wars: A New Hope, Lucas bet big on the franchise’s ability to engage fans after they watched the movie through souvenirs, toys, and other related products — an idea that made him billions as the series grew in scope and popularity.

“It’s the original blockbuster, in terms of opening up this huge market for merchandise with fantasy-based superheroes and space movies,” says Richard Gottlieb, a toy industry consultant and founder of Global Toy Experts.

The franchise has raked in more than $9 billion in worldwide box office revenue, but in the lead-up to The Force Awakens, the first installment of the sequel trilogy, analysts predicted Star Wars could produce $5 billion in merchandise revenue. (Disney doesn’t release details of its financial licensing deals.)

Star Wars’ appeal is no longer considered niche, as it has manifested over decades into a major cultural touchstone. This coincides with the broadened popularity of “nerd culture,” as subcultures surrounding science fiction, comic books, and video games enter the mainstream. Adults are brazenly enthusiastic about activities like collecting Funko Pop figures, waiting in long lines for a movie’s midnight release, or attending a convention dressed as their favorite fantasy character.

This gives Lucasfilm “a huge amount of leverage,” Kozinets says, to expand the type of branded product it wants to create in conjunction with Star Wars. (Disney bought Lucasfilm in 2012 for $4.02 billion and has acquired the rights to the franchise.)

Product tie-ins have grown increasingly diverse as “the notion of play as an acceptable adult past time” becomes normalized, Gottlieb adds. It’s common for franchises to work with alcohol companies, jewelry and sneaker designers, and makeup brands to offer collectibles.

That doesn’t mean adult fans will shy away from purchasing things like action figurines or plushies. Baby Yoda, as fans are calling a character from The Mandalorian series, appears primed to dominate the plushie market once Disney decides to release baby alien merchandise. (The character was not part of the early marketing or merchandise launch for the series to avoid spoilers, according to director Jon Favreau.)

Already, the internet has latched onto the character, spreading memes, fan art, and even unofficial merchandise. As Allegra Frank writes for Vox: “The character seems to have broadened interest in the show immensely. He clearly appeals not just to Star Wars fans, but a bigger demographic: lovers of all things tiny-baby-adorable.”

Still, Gottlieb believes Star Wars mania is primarily driven by adults — the baby boomers, Gen X-ers, and millennials who grew up with the series. Kids today have a multitude of franchise choices to fall in love with, he tells me: “Just look at the pantheon of superheroes in Marvel and DC. You realize that the average child has to really decide where to invest their time, passion, and money.”

Due to the sheer number of movie releases, characters, and storylines constantly pumped out by major studios, it seems difficult for any single franchise to have a solid grip on the next generation — at least in the way Star Wars has influenced legions of fans across decades.

Yet Star Wars still has a ubiquitous hold on popular culture, with Disney investing in theme park offshoots of the franchise in California and Florida, multiple television shows on Disney+, and another trilogy after The Rise of Skywalker. This provides plenty of opportunities for younger audiences to familiarize themselves with the franchise, and so far, Disney is profiting from them.

Star Wars is a space odyssey, which gives its creators the ability to spawn parallel plotlines or universes that don’t have to tie into the original story. As these stories proliferate, so does the merchandise that’s designed to accompany every part of our lives. After all, the market is there for it.

Big Little Lies season 2, episode 3 recap: Hail Renata, the Medusa of Monterey
Trump-allied pastor tells worshippers “America is a Christian nation”
How the slow sabotage of Obamacare may hurt America’s breastfeeding rate
Why is it so hard to stop touching your face?
The partisan culture war over masks
It’s “white supremacy normalized”: A historian on why Stone Mountain should come down